An Oral History Of ‘Mad Men’ 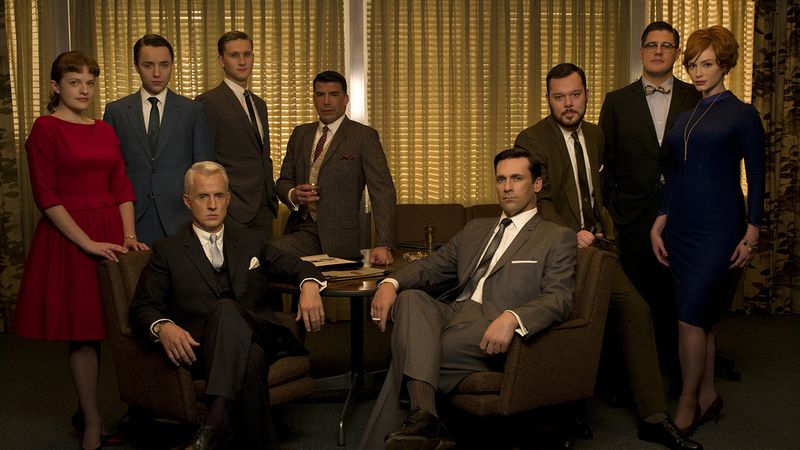 In 2007, a minor television network called AMC debuted an off-kilter and meandering period drama starring a group of unknown actors. The series was called “Mad Men,” and over the next few years, it turned its unknown cast into A-list stars, transformed its struggling network into a celebrated bastion of prestige programming, and, against all odds, changed the landscape of broadcast television forever.

Now, with the legendary series drawing to a close, the men and women who made “Mad Men” possible have come together to discuss how the show began. Here, for the first time ever, is the complete and authoritative oral history of “Mad Men.”

Matthew Weiner (series creator): It was 2006, and I had just been fired from The Sopranos for writing an episode where every single character dies on a roller coaster. I had been toying with the idea for Mad Men for a number of years, and since I was currently out of work, I figured I would try pursuing it in earnest. I sat down and wrote all seven seasons of Mad Men in about four hours.

Ed Carroll (President, AMC Networks): At that time, the only thing airing on AMC was a show called Broderick Names Them Roderick, which was a reality show about Matthew Broderick holding divorced men at gunpoint and forcing them to change their legal name to Roderick against their will. We aired this show 24 hours a day. Needless to say, we were looking for some original programing.

Matthew Weiner: I walked into Ed Carroll’s office without knocking, and I said, “What about a show where it’s Don Draper, baby?”

Ed Carroll: Matt just stood in my office excitedly repeating the phrase “It’s Don Draper, baby!” over and over again. I had no idea what Don Draper was, but I said to Matt, “You’ve got yourself a show.”

Matthew Weiner: The next step was to get a cast together.

Jon Hamm (Don Draper): Yes. I am Hamm. I read the script of Mad Men. I knew that I wanted to be the main star. The secret man who drinks at work. I loved him. I called Matthew Weiner and I told him, “I love this script. I love the main star. Hamm must be Draper. It has to be Hamm.”

Matthew Weiner: Definitely my favorite part about Don Draper is that he drinks at work.

January Jones (Betty Draper): I went to the audition, and all Matt asked us to do was shout the word “advertising.”

Matthew Weiner: It’s a show about advertising, so anyone we cast would have to be able to say “advertising” very loudly.

Ed Carroll: Matt’s rule was whoever could shout the word “advertising” the loudest got to be in the show.

Jon Hamm: I am Hamm.

John Slattery (Roger Sterling): I knew I nailed the audition because I yelled “advertising” into a megaphone. Nobody else auditioning for Roger had thought to bring a megaphone.

Matthew Weiner: To this day, I believe we assembled the perfect cast for that show. Every actor on Mad Men is terrible, but that’s only because there are no good actors in the world. I think we got the least bad actors who exist.

Weiner’s unlikely television success was beginning to take shape. It had the script. It had the network. It had the cast. Now, they just had to film it. The first season of “Mad Men” is legendary for many reasons, but arguably its greatest triumph is the way it gradually reveals that Don Draper is not who he says he is—he is actually named Dick Whitman, and he stole the identity of the real Don Draper, his commanding officer in the Korean War who was killed in an explosion.

Matthew Weiner: When I took Jon Hamm aside and told him that Don Draper’s real name was Dick Whitman, he was extremely happy.

Jon Hamm: Yes, I am Hamm. One of my favorite things about the secret man who drinks at work is that he is actually a different man. Don Draper is Dick Whitman, but nobody knows. Dick Whitman saw Don Draper explode, and then Dick Whitman became Don Draper, and now Hamm is Draper. I thought that this was the best, and so when we were filming the show, I would always end every scene by saying, “I’m not Don Draper, I’m Dick Whitman! Yowza!”

Vincent Kartheiser (Pete Campbell): Jon Hamm is a talented actor, but during the pilot he kept going off script to announce that Don Draper was actually named Dick Whitman.

Elisabeth Moss (Peggy Olson): Even for scenes he wasn’t in, Jon would burst into whatever room we were filming in and shout, “No, I’m not Don Draper! Don Draper exploded! I’m Dick Whitman instead! Yowza!”

Matthew Weiner: He just wouldn’t stop. In the end, we just had to edit out hours of footage of Jon Hamm announcing, “I’m Dick Whitman. Yowza!”

John Slattery: When Jon Hamm says the word “Yowza!” his voice gets extremely low-pitched, like a dragon is talking.

Christina Hendricks (Joan Holloway): Matt was always telling the actors secrets about their characters. One day, in the early stages of filming the first season, Matt took me aside and told me that, in the Mad Men universe, Joan would eventually die by getting eaten by a shark in the year 2131, when she is 200 years old. He also told me that Joan knew that this was how she was going to die, and that she didn’t care.

Matthew Weiner: Joan knows that a shark is going to eat her on her 200th birthday, and it doesn’t bother her at all. Every evening, she gets a phone call from a wizard in the middle of the night, and the wizard says, “A shark will swallow you when you are ancient,” and Joan always says, “So fucking what? I can’t wait.” The reason why Joan is destined to live until she is 200 years old is because her father accidentally ran over the wizard in his car, so the wizard put a curse on his daughter. This backstory informs every aspect of Joan’s character, even though it’s only hinted at a few times over the course of the show.

January Jones: When Vincent Kartheiser first showed up on set, he clearly had none of his lines memorized. Whenever we got to Pete Campbell’s lines, Vincent would go completely off script and start improvising lines about something called The Pete Campbell Weight-Loss Festival, an annual event in the desert where Pete Campbell led dieting seminars and aerobics classes for thousands of paid attendees.

Elisabeth Moss: There is a moment in the pilot when Pete has come to Peggy’s apartment to try to seduce her, and Peggy says to Pete, “Why are you here?” Pete is supposed to say, “I wanted to see you tonight,” but Vincent didn’t know his lines at all, so he said, “Peggy, I am here to tell you about a wonderful opportunity for weight loss in the desert. It’s called The Pete Campbell Weight-Loss Festival, and boy does it work!”

Matthew Weiner: What a goddamned nightmare. All of the actors were such goddamned nightmares. They were the best cast I’ve ever worked with, but that’s only because every other actor in the world is even worse. There are no good actors on earth. The only good actor ever was Orson Welles, and my wife and I murdered him.

Chapter 3: The Legacy Of Mad Men

After seven seasons, “Mad Men” has made a permanent impact on the landscape of American television and on American culture at large. But what was it that made the show so successful, and how will the show be remembered in years to come? What, in short, is the legacy of “Mad Men”?

Matthew Weiner: It definitely became this thing in the culture that I never could have anticipated. I recently got a letter from a woman that said, “I gave birth to identical triplets yesterday and named all three of them Don Draper. Those are their names because your show is so good.” I never thought Mad Men would have that kind of impact on people’s lives.

Ed Carroll: Mad Men changed television forever. There used to be a lot of garbage on TV, but now every show is good. AMC is about to produce an amazing new drama called He Swallows It, which is a show where every episode a man writes “World War I” on a piece of paper and then eats that piece of paper. The only reason that a show like that exists is because Mad Men paved the way for quality programming. Matt Weiner’s show didn’t just save AMC; it saved all of American television.

Jon Hamm: I am Hamm. Mad Men is about being the secret man who drinks at work. It is about watching a man explode and then saying, “I am that man who just exploded. Give me his trophies.”

Elisabeth Moss: When Peggy Olson first starts working at Sterling Cooper, she’s a secretary, but she quickly works her way up to copywriter. To me, Mad Men is about how sometimes you’re supposed to do one thing, but then later, people will tell you to do another thing instead.

John Slattery: People tend to think of Matthew Weiner as this happy, well-adjusted genius, but I don’t know if that’s true. If you really look into Matthew’s eyes, you’ll see some demons.

Matthew Weiner: There I was holding onto this choking man’s ankles, slamming him into the wall over and over again while he gagged and gasped for breath. Anyway, after two continuous hours of slamming him against the wall, I realized he was dead. I turned to everyone in the restaurant, pointed at the dead man, and said, “Okay, I’m him now.” And everyone in the restaurant gave me a polite round of applause.

Ed Carroll: Matt seems lighthearted when you first meet him, but once you get to know him, you start to realize that he’s carrying some sort of tremendous emotional burden that he just can’t talk about.

Matthew Weiner: I stole the life of the real Matthew Weiner. My real name is Francis Muscles, and I’m a fraud. I’ve kept that secret for my entire career.

John Slattery: To me, Mad Men is about how easy advertising is. Anyone can create an advertisement for anything in the world. Like, for instance, salt. I could make a commercial where a man walks out of the ocean, turns to the camera, and says, “Salt: It’s white sand.” That commercial would make everyone buy salt immediately. It’s so easy.

Christina Hendricks: To me, Mad Men is about a group of men and women who work in advertising in the 1960s and run into various problems.

Matthew Weiner: It’s a lot of things to a lot of people, but to me, it’s just a television show. None of the stuff in Mad Men actually happened. We faked everything and made up all the characters. Mad Men is a complete lie, but it’s a beautiful lie. It’s the greatest lie I’ve ever told.