Animal Rights FTW! Popeyes Has Announced That They Will Only Serve Chickens Killed In Self-Defense! 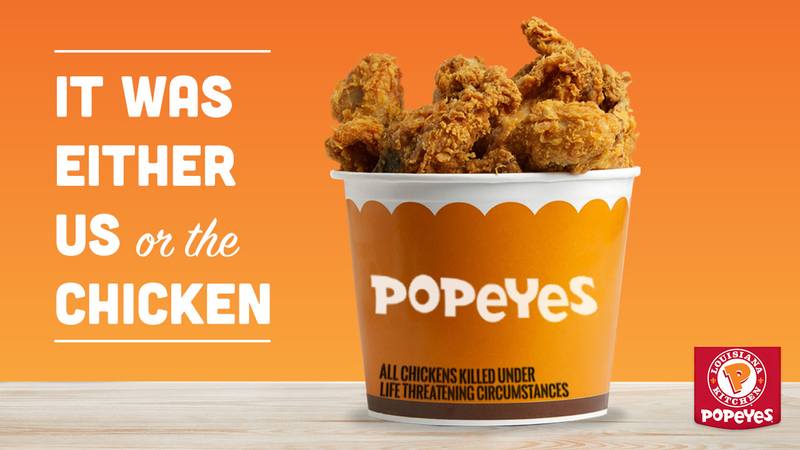 There’s no doubt that Popeyes Louisiana Kitchen has mastered the art of the chicken, but as of today, they’ve also mastered something else: ethical farming. In what is a major win for both environmentalists and animal rights activists alike, Popeyes just publicly announced that it will only serve chickens that were killed in self-defense!

Hello, PETA, are you listening? Because THIS is how it’s done!

From now on, whenever you buy chicken from Popeyes, you can guarantee that you’re eating responsibly sourced meat that wasn’t killed because a farmer wanted to, but because he was attacked and left with no other option. According to a statement released online, all Popeyes-approved vendors are only permitted to use poultry that was killed because it posed a credible threat to workers’ safety and escalated a confrontation that simply could not be avoided.

“Our customers should feel good about their choice to eat Popeyes because, whether it was acting alone or with a flock, the chicken they are eating attacked us first with a clear intent to harm,” said Jane Allerton, the CEO of Popeyes, in a press release yesterday. “The only way a chicken is getting from our farm to your plate is if it breaks out of its cage, charges a farmer, and forces the farmer to kill in order to survive. That’s a guarantee.”

Yes! Just yes! Popeyes is leading the charge for animal rights, and we could not be more excited!

“Chickens that don’t attack our employees or are easily subdued with a few well-placed punches or kicks are NOT sourced for meat. But the ones who back us into a corner? Popeyes is proud to serve those bastards every day,” continued Allerton. “The days of feeling guilty about eating a Chicken Po’boy are over! Really, in many ways, you’re doing us a favor by eating them.”

Wow. Yes. Finally, a fast-food chain we can feel good about! While it might not have been easy for Popeyes to make this change, we’re glad they did, and we hope other fast-food restaurants follow suit. We’re excited to see what Popeyes does in the future!