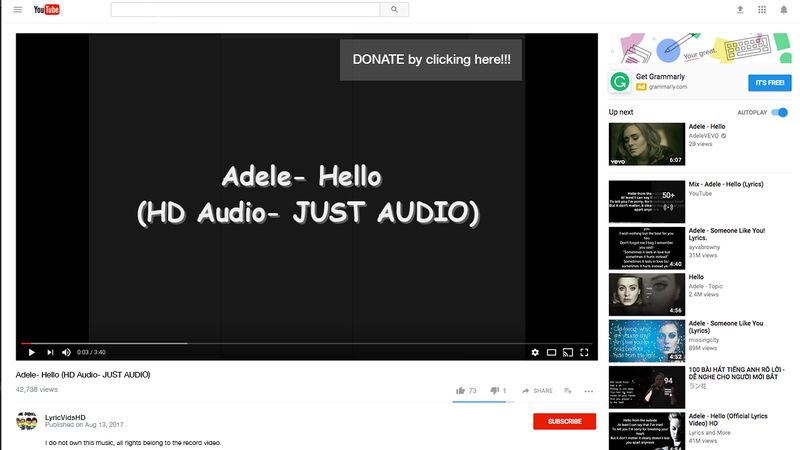 The music world just got the most incredible surprise ever! After years of waiting and thinking it may never happen, the mind behind “Lumineers- Ho Hey (Lyric Video- UNOFFICIAL)” has officially come out of retirement with a new release called “Adele- Hello (HD Audio- JUST AUDIO).”

Yes, you read that right. LyricVidzHD is back, and his work is better than ever!

It’s been far too long since we last heard from LyricVidzHD. The beloved music superstar first rocketed to international fame and universal acclaim in 2014 after posting the groundbreaking “Taylor Swift- Shake It Off (Lyrics w/ HD Audio Dragon Ball Z)” on YouTube. He went on to post a string of now-legendary YouTube videos, including “Mark Ronson Bruno Marks UPTOWN FUNK (LYRICS ON THE SCREEN)” and his captivating foray into television “Family Guy BEST Quagmire funniest Moments.” These videos netted his YouTube nearly 30,000 loyal subscribers and quickly established him as one of the most brilliant creative minds working today.

His last release, “Lumineers-Ho Hey (Lyric Video- UNOFFICIAL),” was considered one of his very best, but since that post, Lyric VidzHD had been almost entirely dormant, and many loyal fans were beginning to wonder if he had retired permanently.

That’s why it’s so amazing to see LyricVidzHD finally return to enchant music lovers everywhere with “Adele- Hello (HD Audio- JUST AUDIO).” It’s a complete return to form for this incredible artist. The new video features the same iconic Papyrus font that quickly became his trademark when he exploded onto the scene with his very first video all those years ago. He even went so far as to annotate the project every three seconds—a signature technique of his that helped inspire others in the industry—busting out familiar catchphrases such as “Wow! 20,000 views! Thank you!” “Please check out my other videos,” and “DONATE by clicking here!!!”

Oh, and you better believe he wrote, “I DO NOT OWN THIS MUSIC, ALL RIGHTS BELONG TO THE RECORD LABEL,” in the video’s description—classic LyricVidzHD!

Considering that fans have waited so long for LyricVidzHD to come out of retirement, it’s no surprise that the response to this new project has been overwhelmingly positive, with 73 thumbs up compared to just a single thumbs down. The reviews have been pouring in within the comments section as well, as this creation has earned high praise from commenter Waldo88888, who said, “i loved this song in high school, soooo relaxing and feels like i am in an other worlds… thx for uploading.”

While there’s no telling what’s next for LyricVidzHD, this release is definitely worth watching the unskippable ad and finding a YouTube-MP3 converter for. “Adele- Hello (HD Audio- JUST AUDIO)” is a masterwork from one of the greatest artists working today, and we can’t recommend it highly enough.