ATTENTION, PATRIOTS! The SICKOS At Netflix Are Translating ‘CHEERS’ Into EVIL SPANISH So ILLEGALS Can Learn Our PRECIOUS ‘CHEERS’ SECRETS 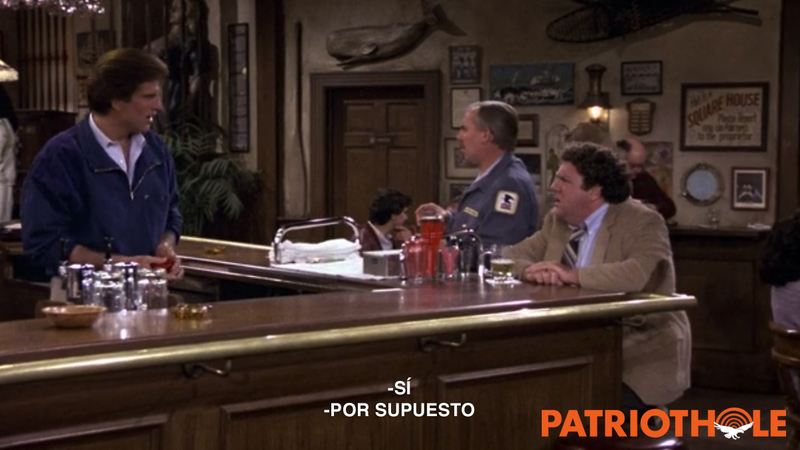 Patriots, LISTEN. If you thought liberals couldn’t get any more repulsive, then think again. The SICK MEDIA FREAKS at Netflix are translating Cheers into Spanish so that illegal aliens can learn our prized CHEERS secrets.

The perversion of liberals knows NO BOUNDS.

Thanks to these Hollywood TRAITORS, any Spanish-speaking illegal can turn on Cheers on Netflix and start learning deeply held American secrets like HOW SAM AND DIANE KEPT THEIR WILL-THEY/WON’T-THEY DYNAMIC FRESH FOR SO MANY YEARS in their mother tongue. There is no telling what Mexican criminals will do if they discover that Netflix is translating such closely held WHITE values like how CARLA HAS A PRICKLY DEMEANOR BUT ULTIMATELY IS A COMPASSIONATE PERSON, but we should all be terrified.

Make no mistake about it, patriots. Illegal aliens are champing at the bit to use our beautiful Cheers SECRETS against us, and Silicon Valley hedonists are tying it up in a bow for them.

Not only is Netflix dubbing this most sacred Cheers wisdom into HISPANIC SPANISH, but they’re also adding Spanish subtitles to each Cheers episode so that even DEAF IMMIGRANTS can learn them. It’s almost like the Netflix MISCREANTS are begging illegals to learn WHY SAM AND THE GANG PUT UP WITH CLIFF DESPITE HIS KNOW-IT-ALL ANTICS and WHETHER OR NOT NORM IS GOOD AT BASKETBALL, even though that knowledge was only ever meant for AMERICAN WHITES. If that’s not high treason, we don’t know what is.

To the SICKOS at Netflix: Here’s an easy way to tell if someone belongs in this country or not. Can they understand one of our SAVORY CHEERS TREASURES without it being translated into SPANISH, the language that FIDEL CASTRO and MALIA OBAMA both speak? No? Then they can get the HELL out, and you can throw yourselves out with them.