Awesome Artifact: The Muppet Mistress Jim Henson Made For Himself When He And His Wife Were Going Through A Rocky Patch Is On Display At The Smithsonian 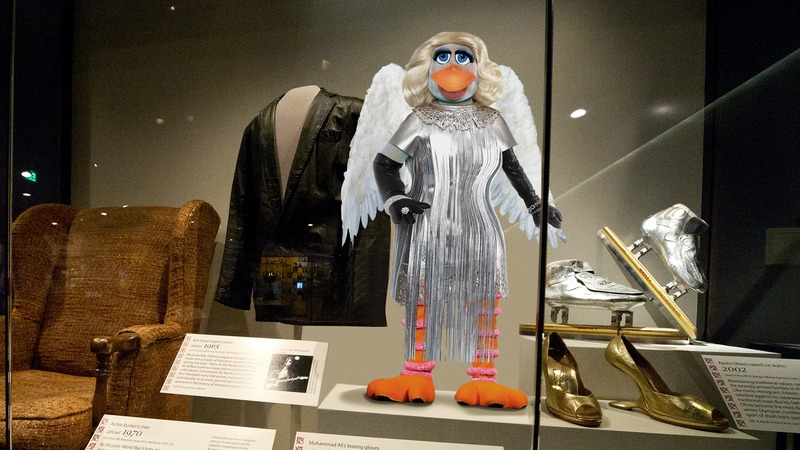 If you’re a fan of The Muppets, get ready to geek out, because you’re about to get a chance to catch a glimpse of an essential piece of Muppets history: The Muppet mistress that Jim Henson made for himself when he and his wife were going through a bit of a rough patch just got a display at the Smithsonian!

Yup, it’s official. This is pretty much the coolest thing ever!

The legendary puppet, which was created in 1981 when Jim and his wife were going through a lengthy period of interpersonal tension during which they became sexually and emotionally distant, was set up in a display entitled “A Lover’s Oasis: Jim Henson And Bonnie The Eagle” earlier this week. Visitors can finally see with their own eyes the towering blue-feathered 6-foot-5 Muppet that Jim Henson retreated to for sexual companionship when he felt like his marriage was crumbling.

“At first glance, Bonnie may seem to be just another Muppet with a sexy polka dot ascot and succulent red lips painted over a felt bird beak, but this puppet had a deeply important role in both creative and personal aspects of Jim Henson’s life,” Smithsonian curator Michelle Turner said of the display, which museumgoers can view behind a glass enclosure until next August. “Jim Henson created Bonnie The Eagle so he’d have a creature to make love to in secret before his wife got home from work, and we’re excited to give fans a window into the period of the Muppet creator’s life when his marriage was on the rocks.”

Whether you’re a Muppets diehard or just a casual fan, you won’t want to miss this rare opportunity to see Bonnie The Eagle, because, as the Muppet that the romantically dejected Jim Henson turned to for sex, the character is truly a cornerstone of the Muppets canon. Bonnie was voiced by Frank Oz, who provided her with a whimsical British accent for both her numerous television appearances in the ’80s and during the secret romantic liaisons the character shared with Henson in hotel rooms and secluded areas of the forest whenever the genius puppeteer felt misunderstood by his wife.

So. Perfect. In addition to the Muppet itself, the display is also showing the original manuscript of Bonnie’s character description written by Jim Henson: “Bonnie The Eagle is a beautiful woman Muppet. Bonnie is Sam The Eagle’s cousin, and Sam is cool with us hanging out all the time. She finds older human men more attractive than puppets. Her interests include sex, hearing my ideas, and being loyal.” Seeing these words written in Henson’s own handwriting is sure to be an awe-inspiring experience for anyone who admired his talent and one-of-a-kind mind.

Incredible. If you have any interest in the history of the Muppets, then this display is a must-see. But you better get your tickets quick: This sounds like an exhibit that mobs of Henson devotees will be lining up around the block to see!