Awkward: Jeb Bush Just Showed Up To Richard Branson’s Private Island In His Swim Trunks And Asked If He Could Hang Out With Him Like Barack Obama Did 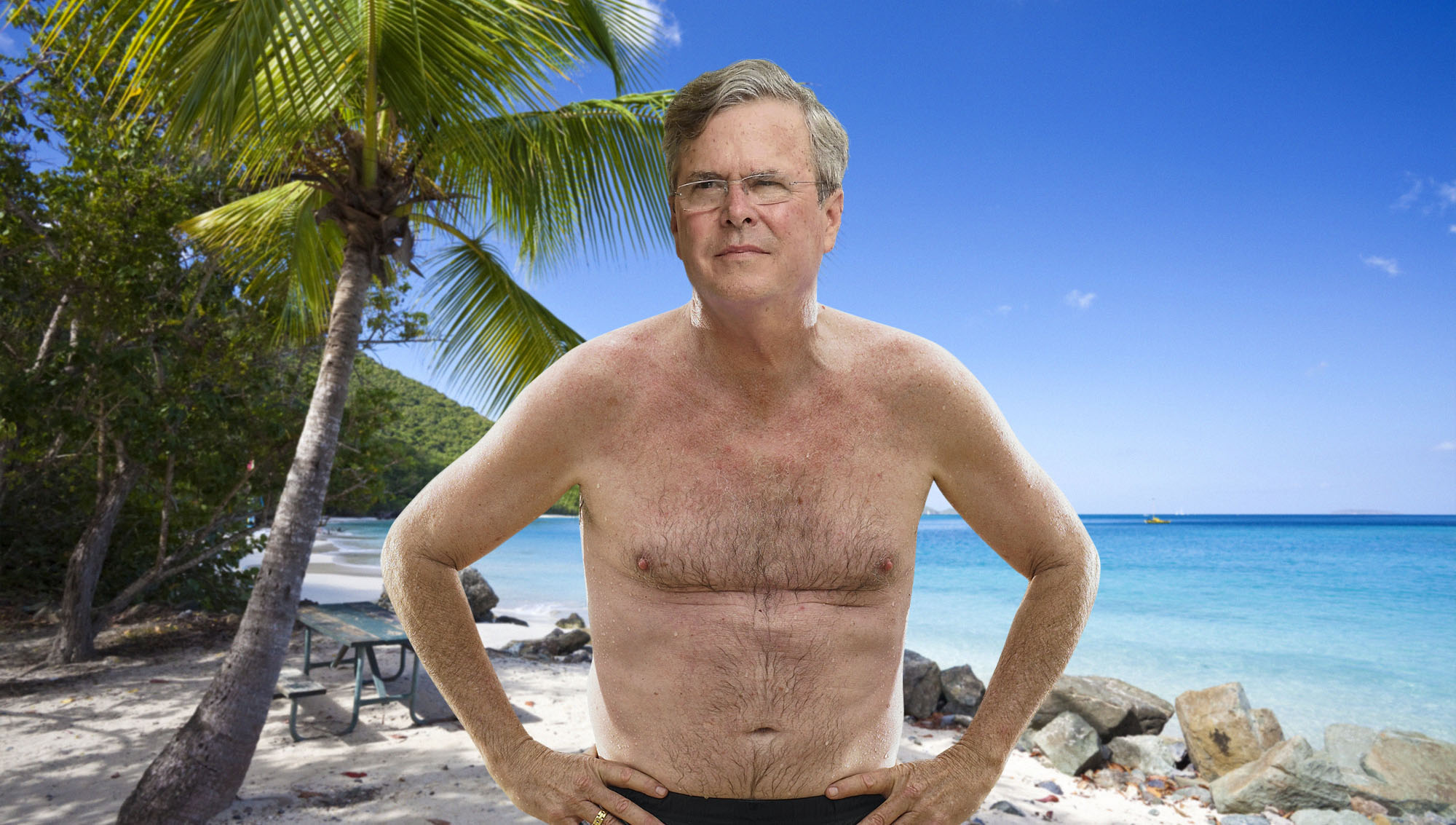 Well, here’s an early frontrunner for what could be the most cringe-worthy story of the year: Jeb Bush just showed up to Richard Branson’s private island in his swim trunks and asked if he could hang out with him like Barack Obama did.

Earlier today, Bush arrived uninvited to Branson’s private paradise Necker Island, seeming to think he was just as cool and worthy of bromance as guys like Obama and Tom Hanks, who the billionaire frequently hosts. The shirtless former governor waddled clumsily in flippers through the sand and greeted Branson with a big hug, giving the visibly baffled Virgin founder no time to protest before launching into a long, detailed itinerary of all the activities he was hoping they could do together during his surprise six-day visit, such as drinking piña coladas in bathrobes and sharing secrets in the hot tub late at night.

Branson tried explaining that he really didn’t have any time in his schedule for a visitor, but was interrupted by Bush loudly singing the Gilligan’s Island theme song as he dragged his bulky suitcase up to the beachfront mansion, where he instructed a housekeeper to set him up in the same bedroom Obama had stayed in. He then giggled his way back to the beach and flopped down on his back before daring Branson to bury him in the sand, adding “you should put two seashells on my chest to make it look like I’m wearing a mermaid bra!” Perturbed but unsure how to get out of the situation, Branson went over to attend to his unexpected guest only to be tackled by a riled-up Bush, who shouted “Sand fight! Sand fight!” while playfully attempting to stuff handfuls of sand into his host’s mouth.

Yeesh. What a nightmare.

Making matters worse for Branson, Jeb immediately made it clear that he hoped photos of the duo’s shenanigans would go viral just like when Obama visited, and he quickly began taking selfies to post on Instagram, all of which show Bush having the time of his life with the frazzled business magnate. In one selfie, Bush drapes himself in kelp to look like a sea monster while Branson shields his face from the camera. In another, Bush is pulling down a horrified Branson’s shorts with his teeth like the dog on the Coppertone bottle, which he posted with the caption “Just two beach bums…or three if you count Richard’s buttcrack lol.” If that wasn’t already obnoxious enough, shortly thereafter Bush twisted his ankle in the sand and started shrieking hysterically in pain, telling Branson that he thought it might be sprained and that he needed him to fly him to the doctor in his private helicopter. At press time, Branson was tending to his moaning guest with an ice pack while paparazzi idling in boats offshore snapped photos of the pair to shop to tabloids around the world.

Sheesh. For everyone on the island who isn’t Jeb Bush, it goes without saying that this couldn’t be any less fun. Hopefully, Bush takes the hint and realizes that Branson doesn’t want to have a bromance with him, otherwise it’s going to be a long, long six days.