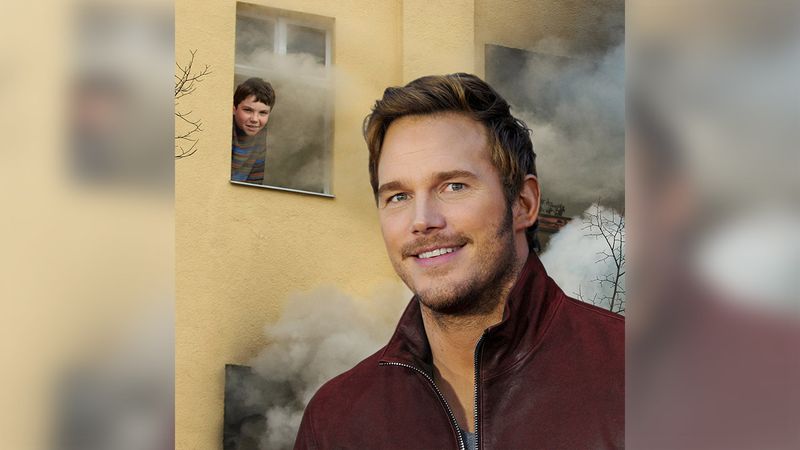 Here’s a story guaranteed to put a smile on your face.

Eight-year-old Ryan Brosi has been a huge Chris Pratt fan ever since he first saw Guardians Of The Galaxy three times on opening day. That’s why it’s so heartwarming that his hero, Star-Lord, did something awesome in real life when Ryan was in a place of need. Through the coordination of Make-A-Wish, Chris Pratt went to visit Ryan after he got caught inside a burning building.

What an incredible gesture!

Thanks to the good folks at the Make-A-Wish Foundation, Chris Pratt was airlifted to the scene of the house fire, where he wasted no time getting to a place on the sidewalk where Ryan could see him from his bedroom window. Standing 100 feet back from the blaze, Chris rattled off some of Star-Lord’s most memorable quotes, making sure to yell them so Ryan could hear them over the roar of the inferno. And of course, no Star-Lord visit is complete without a dance-off, which Chris totally rocked until a firefighter told him he was getting in the way of an active rescue attempt.

Um, someone check on our ovaries, because this latest Chris Pratt gesture may have just splattered them all over the wall. Just look at this amazing tweet from Chris:

While most celebs would have just stuck around for a few minutes, Chris stayed firmly planted on the sidewalk yelling things up to Ryan’s engulfed second-story room for over 20 minutes until the plumes of dark, black smoke hampered visibility. But before the air was too clogged with ash to see, Chris managed to toss up a signed Guardians poster and even deputized Ryan as a co-captain of Star-Lord’s ship, the Milano.

Wow, as if we needed more reasons to be totally in love with Chris Pratt. Good on you, Make-A-Wish and Chris, for making the day of a fan in a tough situation. This is what it’s all about!