Beautiful: These Students Leapt Into Action The Moment They Found Out Their Teacher’s Hogs Needed A Good Stackin’ 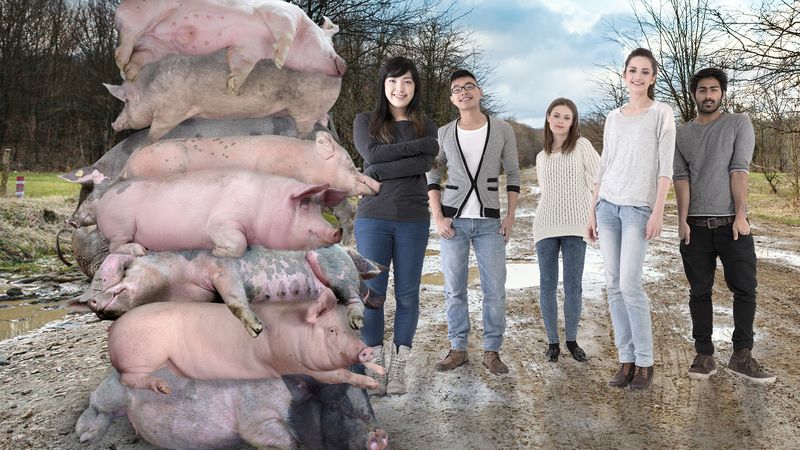 English teacher Calvin Price has long been a favorite of his students at Oak Valley High School in West Chester, PA. But he was living with a devastating secret: His hogs were all over the place. Last week, his students found out about Mr. Price’s misfortune, and that’s when they did something that will put a smile on your face for the rest of the day: They immediately got to work and stacked his hogs right up.

“Mr. Price is so great,” said sophomore Myra Holden. “At school it seems like he’s such a together, happy guy that we never would have guessed his hogs were making such a huge mess of his hog shed. It was like he was living two separate lives. The second we found out about his hog trouble, we knew we had to do something. Mr. Price has taught us so much, we decided right then and there that we were going to pay him back by stacking his hogs up—no matter how difficult it was.”

Every single one of Mr. Price’s amazing students showed up one Saturday before sunrise and got to work on the seemingly impossible task of stacking all 14 of his hogs. “It was hard to see the way Mr. Price was living,” said junior Ollie Medford. “The hogs were everywhere: rooting around in the pasture, running amok in the barn, kicking their apples all around, knocking over their slop buckets…It wasn’t pretty.”

Although the powerful jumbo hogs were slick with mud, the students worked as a team to wrestle every last one to the ground and get ropes around them. Then they hammered together a sturdy platform to give the hogs a stable base to be stacked on. Next, they created an assembly line where the hogs were dried so they weren’t too slippery and then hoisted them up into the air with a pulley to be carefully stacked in a neat vertical formation. No matter how many times the hog stack toppled over and they had to start over from scratch, the kids worked tirelessly until every last squealing hog was perfectly organized for Mr. Price.

“Stacking hogs isn’t an easy job,” said Ollie. “But neither is teaching. Mr. Price always showed us that it’s important to help others, and now it was his turn to get a little help. A few hours in the hog pasture is nothing compared to all Mr. Price has done for us. No one deserves help stacking their hogs more than Mr. Price.”

Unbelievable! Anyone who thinks teenagers only care about themselves needs to take a look at Mr. Price’s hogs all stacked up nice and pretty like a totem pole. Faith in humanity restored!