Blossoming Romance? Katy Perry Was Just Spotted Sitting On Steven Spielberg’s Lap While He Showed Her The Ins And Outs Of Norton AntiVirus 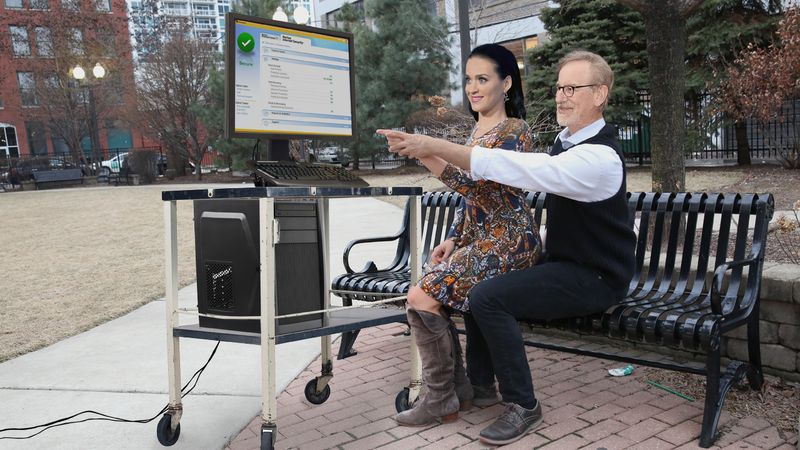 Love is in the air!

The celebrity gossip world was set abuzz earlier today after pop superstar Katy Perry was spotted sitting on Academy Award-winning director Steven Spielberg’s lap as he showed her the ins and outs of Norton AntiVirus.

Witnesses say that Spielberg was seen at a Hollywood park at 5:00 this morning wheeling out an ergonomic office chair and a cart with his desktop computer on it while Perry, dressed in the same candy-striped dress she wore for the Super Bowl XLIX halftime show, followed behind him to make sure the computer’s extension cord did not snag on anything. Once the 70-year-old Spielberg found an area in the park where there weren’t too many bugs, he set up shop and invited Perry to sit on his towel-draped lap, and Perry agreed.

According to sources, The Color Purple director then took a Norton AntiVirus free-trial disc out of his wallet and booted up the software, explaining to Perry that it defends against malware, viruses, and other online threats. The “Teenage Dream” singer appeared to be extremely focused as Spielberg demonstrated Norton’s “Scan Now” function, staring silently at the computer screen for the 20 minutes it took for the software to sweep the machine’s files for risks.

Later, the blossoming couple’s rendezvous was briefly threatened by a sudden rain shower, but luckily Spielberg was well-prepared and had a tarp to drape over his computer and keep it dry. As others in the park ran for cover, Spielberg kept Perry entertained by going through and marking the “Quarantine” box for every single file on his computer and even inviting her to click a few. Perry, clearly impressed by the software, asked Spielberg if Norton AntiVirus was something she could use to protect her own home computer, but Spielberg said no, it’s just for him.

“They seem really happy together,” says a source close to the couple. “Katy couldn’t stop gushing about how Steven was able to clean up his hard drive and free up additional storage space. It definitely seems like she’s ready to move on from Orlando [Bloom].”

At one point, Spielberg offered Perry some of his Listerine only to look up and see she was already gargling some of her own—talk about a match made in heaven! Unfortunately, though, their snuggle sesh had to come to an abrupt end after the Norton AntiVirus software detected an infected file, prompting Spielberg to immediately leap up and drag away his computer cart without saying goodbye. Thankfully, the rest of their morning together went well enough that we can probably expect to see these lovebirds cozying up again soon.

Fingers crossed! It doesn’t get much cuter than these two.