Champion Of Animal Rights: PETA’s New Ad Campaign Features A Naked Bill Gates Begging People Not To Wear A Trench Coat Made Out Of Worms 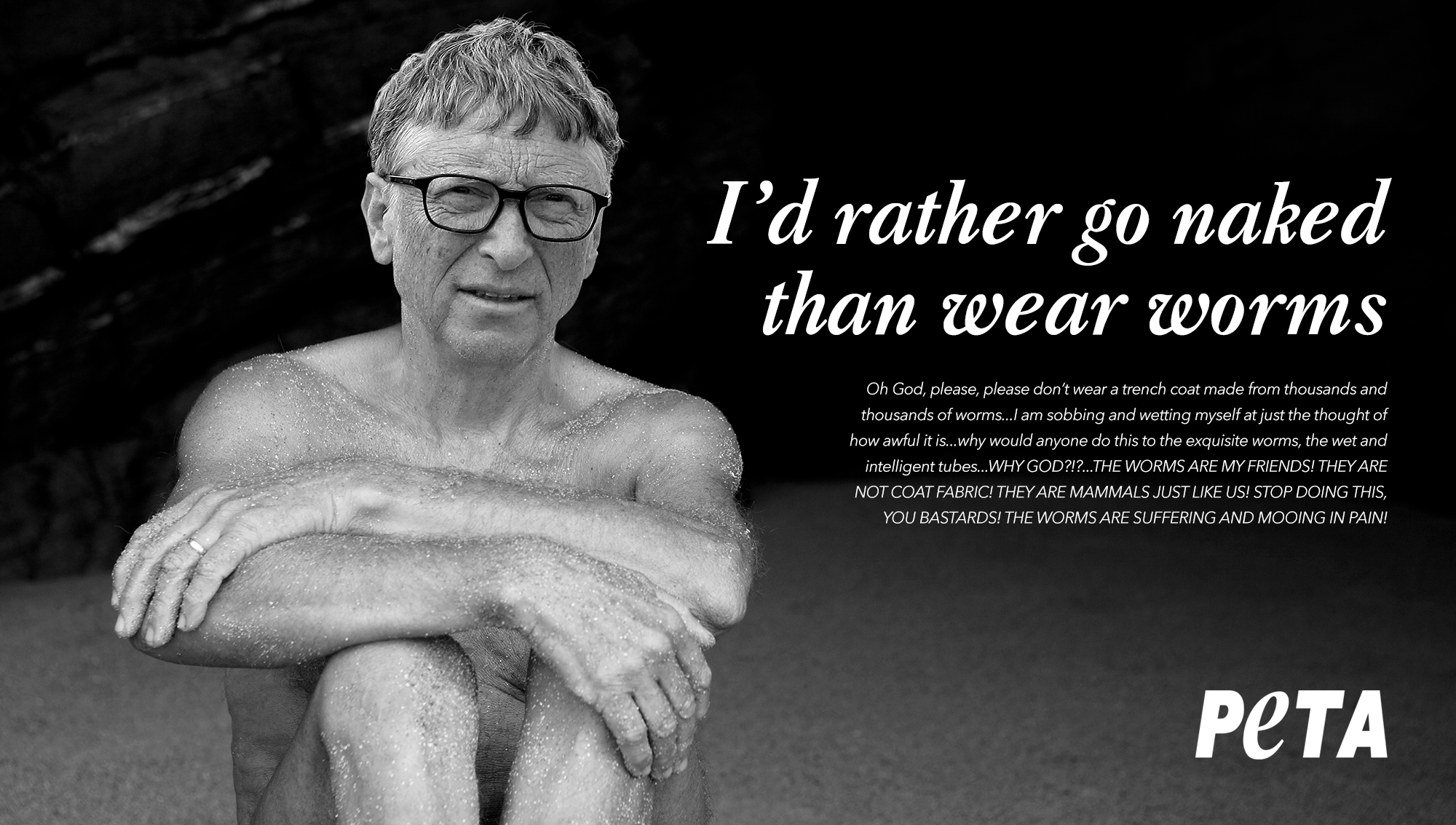 Animal rights activists must be feeling pretty pumped right now, because another big name just lent his voice to their cause: PETA just launched a new ad campaign featuring a naked Bill Gates begging people not to wear a trench coat made out of worms.

Awesome! Bill Gates already does so much for charity, and now he’s officially a champion of animal rights as well.

This week, PETA put up hundreds of billboards across the country featuring a fully nude Bill Gates posed against a somber black backdrop desperately begging people to not wear trench coats constructed entirely out of worms. The words “I’d rather go naked than wear worms” are emblazoned in cursive across each ad, below which, in smaller print, is an urgent plea from Gates reading, “Oh, God, please, please don’t wear a trench coat made from thousands and thousands of worms… I am sobbing and wetting myself at just the thought of how awful it is… Why would anyone do this to the exquisite worms, the wet and intelligent tubes… WHY GOD?!?… THE WORMS ARE MY FRIENDS! THEY ARE NOT COAT FABRIC! THEY ARE MAMMALS JUST LIKE US! STOP DOING THIS, YOU BASTARDS! THE WORMS ARE SUFFERING AND MOOING IN PAIN!”

The powerful new ad campaign also features a 30-second commercial spot in which Gates uses his celebrity to drive home his anti-worm-cruelty message. In it, the billionaire philanthropist enters a public library fully nude, lifts a desktop computer monitor that a child is using up above his head, and then speaks in the direction of an overhead projector he believes to be a camera, saying, “Hello, I invented computers. Please shut up and do as I say. If you are planning on wearing a trench coat, do not wear one made of worms. Wear one made of a different animal, like a monkey or fish. If you wear one made of worms, I will go on a killing spree. Do not wear worm coats. You must obey me. I invented the iPhone. Thank you.” He then throws the desktop monitor into a recycling bin and leaves the library through an emergency exit.

Wow. What a moving message. Bill Gates definitely isn’t afraid to speak up for what he believes in, and hopefully these new ads will make anyone who’s considering wearing a trench coat made out of worms think twice. Kudos to both Bill and PETA for taking such an amazing stand against animal cruelty!