‘Why Would A Cat Be Here?’: 5 Cheetos Commercials Where Chester Cheetah Openly Questions What The Hell He’s Doing In A Commercial For Cheese Snacks 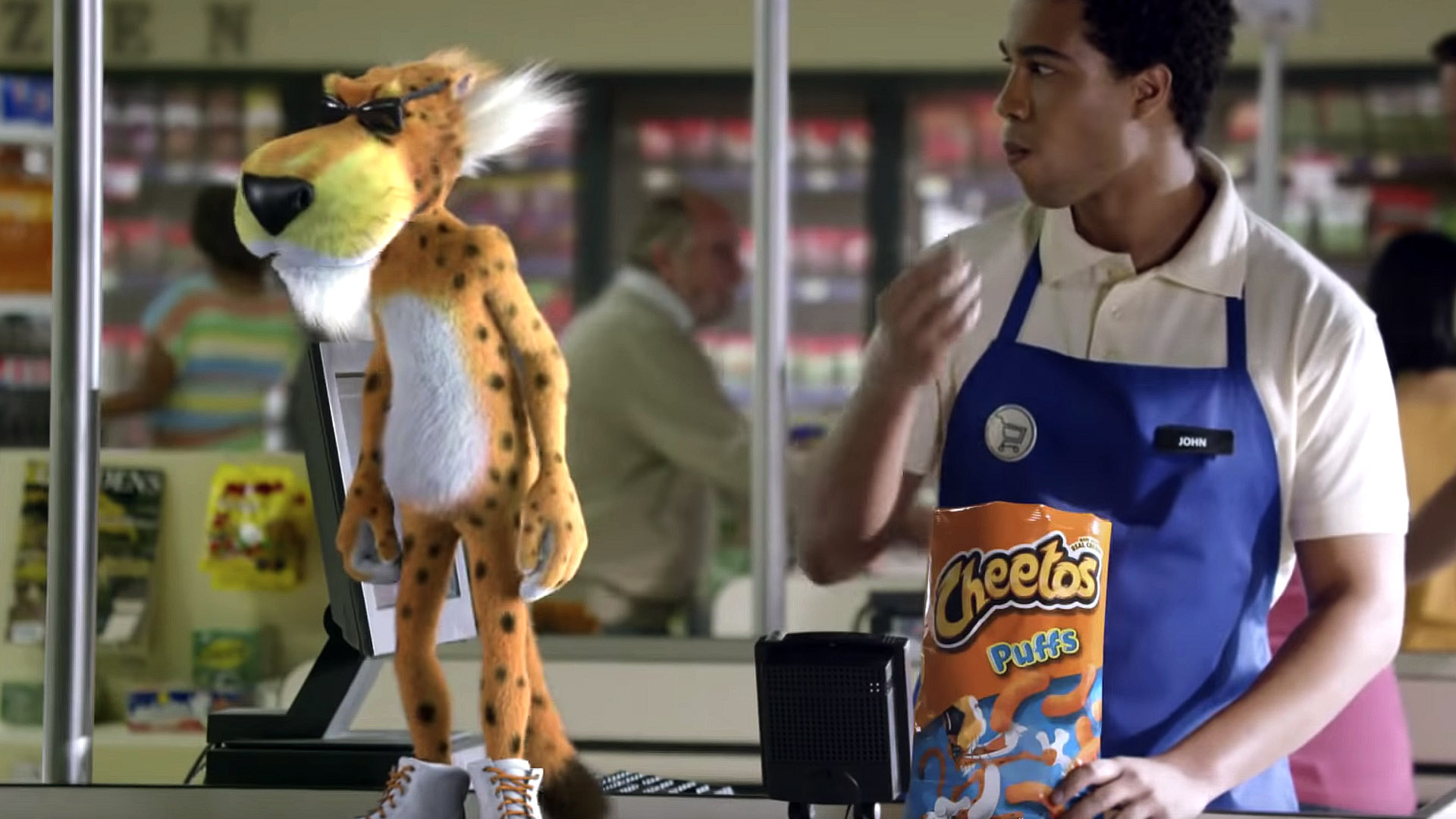 Chester Cheetah is one of the most iconic mascots in the snack biz. But Chester himself has often openly questioned why the hell he’s appearing in commercials for cheese puffs. Here are five such commercials you’ll undoubtedly remember from when you were a kid.

1. The one where he visits the Cheetos Cheese-matics Lab and asks the snackintists if they can draw a single correlation between cheetahs and Cheetos besides the fact that they both start with “chee”

Chester made his debut commercial appearance in 1986 and immediately questioned what the hell he was doing there. The spot shows a group of snackintists hard at work on new crunchnology when Chester bursts through the door and shouts, “Things are about to get a little CHEESY in here!” and begins shredding on his mouth-shaped electric guitar, knocking over the Cheetoizer 2000. He says the tagline “It ain’t easy bein’ cheesy” as electricity shoots from the damaged machine. The commercial’s tone then turns on a dime when Chester begins asking the scientists in a measured, polite voice if they can think of any reason why he, a cheetah, would be in a Cheetos ad. The animated scientists simply freeze, as if the animators had stopped animating them, but Chester continues: “I mean, is it the ‘chee’ thing? Like, chee, cheese, chee, Cheetos, chee, cheetah, I get it, but it just seems like that’s not really enough to go with a cheetah. And also, are cheetahs really an animal you think of as sort of party dudes?” At this point, the commercial ends abruptly.

2. The one where another cheetah is impersonating Chester in order to steal the secret recipe for Cheetos Paws and Chester asks him flat-out why he’s a cheetah

If you watched after-school shows in the ’90s, you’re going to remember this one. An unnamed Chester impostor, who looks just like him aside from the fact that he’s green instead of orange, has infiltrated Cheetos HQ to get his cheesy hands on the secret recipe for Cheetos Paws. Chester catches him in the act, leading to a humorous scene where both cheetahs believe they’re looking at their reflection in a mirror. While the expectation is that Chester is about to lay the smackdown on his imposter for his attempted robbery, Chester instead uses the opportunity to ask his fellow cheetah what the hell is going on with the whole cheetah-in-sunglasses thing. “Can I ask you something,” Chester urgently asks his doppelgänger. “What do you think is the deal with the cheetah thing? Does that relate to cheese somehow? A cheetah is a majestic animal known for its speed and hunting prowess. Cheetahs don’t eat cheese, they don’t produce cheese. There’s nothing to do with cheese snacks there.” While Chester continues with his questions, the impostor slides down a tube and slips away with the Cheetos Paws recipe.

3. The one where Chester’s enemy, Flamin’ Hot Fiona, traps him inside the crunchcano where they get the lava used to make Flamin’ Hot Cheetos, and he doesn’t even try to get away and just burns to death while yelling, “A cheetah in sunglasses? What?” directly into the camera

This commercial aired around Christmas in 2008, and it depicts a sweat-drenched Chester hard at work in a volcano gathering the lava used to flavor Flamin’ Hot Cheetos into buckets. Suddenly, the volcano’s gate slams behind him. The face of his nemesis, Flamin’ Hot Fiona, appears on a monitor, and she cackles with laughter as the lava levels begin to rise. Chester calmly turns to the camera and says, “I mean, with Captain Crunch, the name of the cereal is Captain Crunch. That makes sense. The cereal is called Captain Crunch, so the mascot is a captain named Crunch. But in my case, I’m a cheetah named Chester. And I wear sunglasses and I’m, like, a really cool guy. I just don’t get it.” Finally, the lava engulfs his mouth and he stoically burns to death.

4. The one where Chester travels to the Crunch-lapagos Islands to meet his ancestors and they give him a bunch of shit for being a cheese-snack mascot instead of hunting on the savannah like a normal cheetah

If you’ve got any old cartoons you taped off of TV with your VCR in the ’90s you’ve probably got this one on one of those tapes. In the ad, Chester flies his float plane to the Crunch-lapagos Islands, where he’s greeted by his Cheetah ancestors. His ancestors are fascinated by Chester’s sneakers and sunglasses, which they’ve never seen before. Chester passes out bags of Cheetos to all of them, and while they enjoy the boldly cheesy, mouth-pleasing crunch, Chester begins crying and confesses that he wishes he could be living in the wild with them as an apex predator hunting game as nature intended. “Honestly, I really question why I am here in this commercial. It’s not that I don’t love Cheetos, I do. It’s just that it doesn’t really make a lot of sense.” Chester’s lament is interrupted by a perky announcer grunting, “The cheese that goes crunch!”

5. The one where Chester accidentally eats a bag of Xxtra Flamin’ Hot Cheetos thinking they’re regular Cheetos and the flames shooting out of his ears spell, “What am I doing here?”

The latest instance of Chester openly questioning what the hell he’s doing in a cheese snack commercial is quite recent, first airing in July of 2018. Chester is distracted by watching cool skateboarding videos on his phone and mistakenly pops a handful of Xxtra Flamin’ Hot Cheetos into his mouth, thinking they’re original Cheetos. Chester’s face turns bright red and flames immediately begin shooting out of his ears, curling through the air to form letters that spell out, “What am I doing here? I’ve been around for so long that no one questions it, but honestly, if you think about it, there are about a hundred mascots that should be in this commercial before me: a block of cheese, a cow, an ear of corn. But just because ‘cheetah’ sort of sounds like ‘Cheeto,’ I’m stuck with this? I should be the mascot for, like, a car or motorcycle company. Something fast. 1986—that’s when I started appearing in these commercials. There have probably been a billion dollars spent on ads since then, and they’re still going with Chester Cheetah. Occasionally I try to protest in these commercials hoping they’ll go another route after everyone realizes that it is pretty bizarre that I’m a Cheetah, but apparently this is the best they’ve got. Can’t complain about steady work, I suppose. It’s just… confusing is all.” Finally, Chester douses his head with a bucket of ice water, turning the flames jutting from his ears to smoke, spelling out, “Oh, well.”