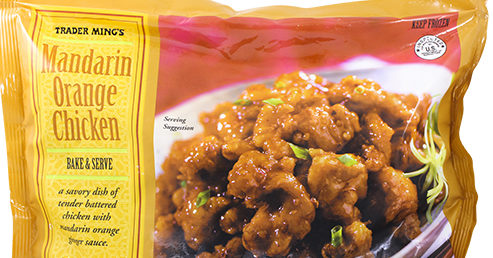 Cultural erasure is an all too common fate for minority groups in the United States, and sadly, this story is just another example of the white-dominant mainstream rewriting history and getting away with it: What was once the proud frozen Mandarin orange chicken of Trader Ming now just says “Trader Joe’s.”

Wow. It’s disgusting that a purportedly progressive company would engage in such obvious whitewashing.

For years, Trader Joe’s 1.5 pound bag of frozen Mandarin chicken was clearly branded as Trader Ming’s, giving due credit to the proud Chinese food innovator responsible for the battered dark meat pieces in orange-ginger sauce. But since then, the beloved grocery chain has completely removed Trader Ming’s name from the savory bake-and-serve morsels and, even worse, replaced it with their own insignia, suggesting that customers should thank the white Trader Joe for bringing them the five-serving bag of takeout-style nuggets. Now, Chinese Americans who used to take pride in Trader Ming’s traditional recipe are being gaslit into believing that Trader Ming never even existed, let alone made vital contributions to the frozen food lineup at Trader Joe’s, and it is beyond fucked up.

This is not okay! Do better, Trader Joe’s!

Trader Ming’s name has unfortunately also been removed from several other products, including his beloved microwaveable Pad Thai cartons and Kung Pao fried cauliflower. It’s honestly pretty ballsy of Trader Joe’s to think that they can simply fool customers into believing that Trader Ming’s food is their own, but in a country where Elvis built his career on the influence of black artists, it’s unfortunately no surprise that a Chinese man is getting such short shrift at the hands of a major company. There are thousands of years of rich culinary tradition behind the dishes Trader Ming painstakingly concocted, but Trader Joe’s seems to think it’s okay to ignore all that and pretend that the storied cultural heritage inherent in every bite of Trader Ming’s dishes never even existed.

This is beyond infuriating. We used to stan Trader Joe’s, but what they’ve done here is deeply offensive. Until they address their heinous actions and make things right, we’re going to be buying our groceries somewhere else.