Damn: This Couple Vowing To ‘Fearlessly Wade Through The Stormy Tide’ Makes It Sound Like They Really Expect To Go Through Some Shit During Their Marriage 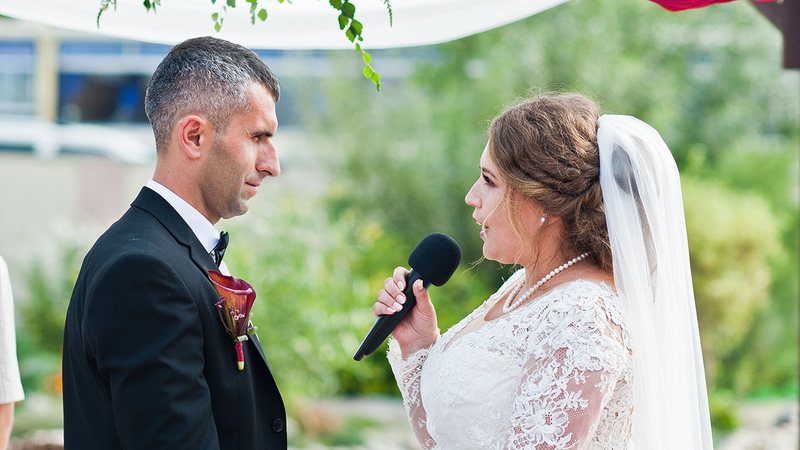 If you’re looking for a story about love in the face of hypothetical adversity, then look no further! One of the most romantic scenes you’ll ever see in your life is currently unfolding at a gorgeous wedding ceremony between longtime sweethearts Tina Allen and Sam Lewis, and their weirdly ominous vows to “fearlessly wade through the stormy tide” makes it sound like they really expect to go through some shit during their marriage.

Damn. From the sound of the insanely intense pledges these two lovebirds are making to each other, you’d think they were about to get shipped off to war together or something.

From the moment their pastor handed over the mic, Tina and Sam’s vows have walked a fine line between heartwarming and genuinely scary. “Sam, as we begin our new life together, I promise to hold your hand as we fearlessly wade through the stormy tide and battle against any force that may rise up to stand in the way of our love,” Tina began, using language that’s currently giving everyone the impression that she thinks some kind of evil army may one day rise up to try to destroy her and her husband. The vows have only gotten bleaker from there, and at this point is sounds like Sam and Tina are bracing to face some real sinister-as-fuck obstacles while they grow old together.

Seriously, what could they possibly be expecting to go through that would merit Sam promising to Tina that he would “stand by you as we struggle together against the unrelenting gales of life”? They’re going on a weeklong honeymoon to Switzerland and then they’re going to live in a Charleston, SC suburb for the foreseeable future. They can probably scale the language back a bit.

It was beautiful to see the devoted couple gaze lovingly into each other’s eyes as they became husband and wife, but they also managed to shoehorn pretty dire-sounding hurricane imagery into almost every sentence, and at one point Sam said to his new bride, “No matter what roiling tempests brew at our doorstep, our love will withstand any deluge,” which left everyone listening with the general impression that he thought his marriage might need to withstand some kind of apocalyptic catastrophe on a regular basis.

Yikes. Pretty heavy stuff. We wish Sam and Tina all the happiness in the world, and we sincerely hope that whatever cascade of disasters Tina was apparently anticipating when she pledged to Sam that she would be “his battle partner in the trenches of life” never comes to pass. Because, seriously, based on these vows, it seems like the two of them are preparing for some extremely dire shit.