Daring To Dream: This Woman Has Spent 30 Minutes In The Dressing Room Imagining Her Life As Someone Who Takes The World By Storm In A Fun, Floppy Hat 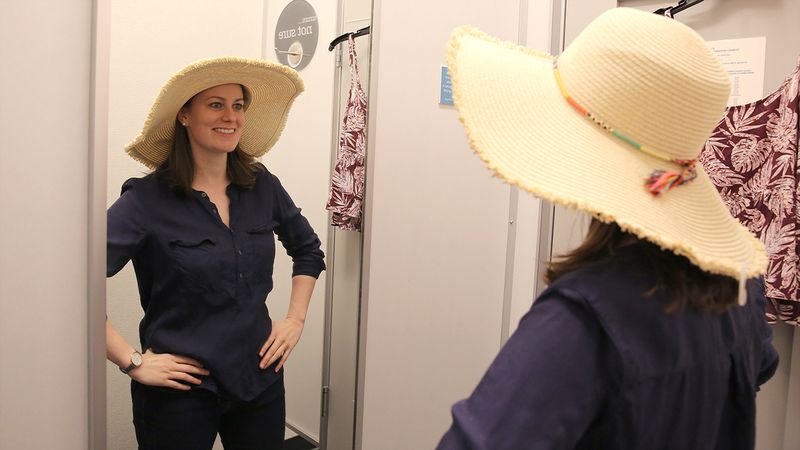 Twenty-seven-year-old Caroline Sampath has always been a big dreamer, but today she proved her imagination is out of this world. After going to a local boutique this morning, she’s spent the last 30 minutes holed up in the dressing room fantasizing about what her life would be like if she were the kind of person who went out and seized the day in a fun, floppy hat.

After sheepishly sneaking the bright yellow hat into the dressing room under a pile of other clothes, Caroline has spent the last half hour standing in front of the full-length mirror, painstakingly assessing the hat from every conceivable angle. Indulging herself in a flight of fancy, the elementary school teacher let herself picture what it would be like to strut down the street in a huge floppy sunhat, turning heads left and right as crowds parted to let a much bolder version of herself effortlessly pass by.

Yes! Despite not owning a single outfit that would match the hat at all, Caroline spent several minutes convincing herself that this $75 accessory might be the start of a new personal style. This incredible woman may have only given herself an hour to shop, but she’s already spent half her time deep in a fantasy where she catches the eye of an attractive stranger while lounging at a sunlit table on a café’s patio, letting the sparks fly between them before coyly looking back down at her cappuccino.

And not only that, but she was even able to keep fantasizing when an employee knocked on the door to check if she was still in there! After instinctively snatching the hat off her head in embarrassment, Caroline slowly placed it back and envisioned herself making an entrance at an elegant gala, sending awestruck murmurs of “Who’s that girl, the one in the floppy hat,” through the room.

Although 10 minutes down the road she might put the hat back on the shelf where she found it and leave the store with only a nude camisole, her fantasy is still going strong. Caroline, whether you end up buying the hat or leaving it behind, we support you. Keep on dreaming!