Elegance Incarnate: This 8th Grader Has Taken A Series Of Incredibly Refined Photos Of Herself Doing An Arabesque In Pointe Shoes In Front Of The Cold Stone Downtown 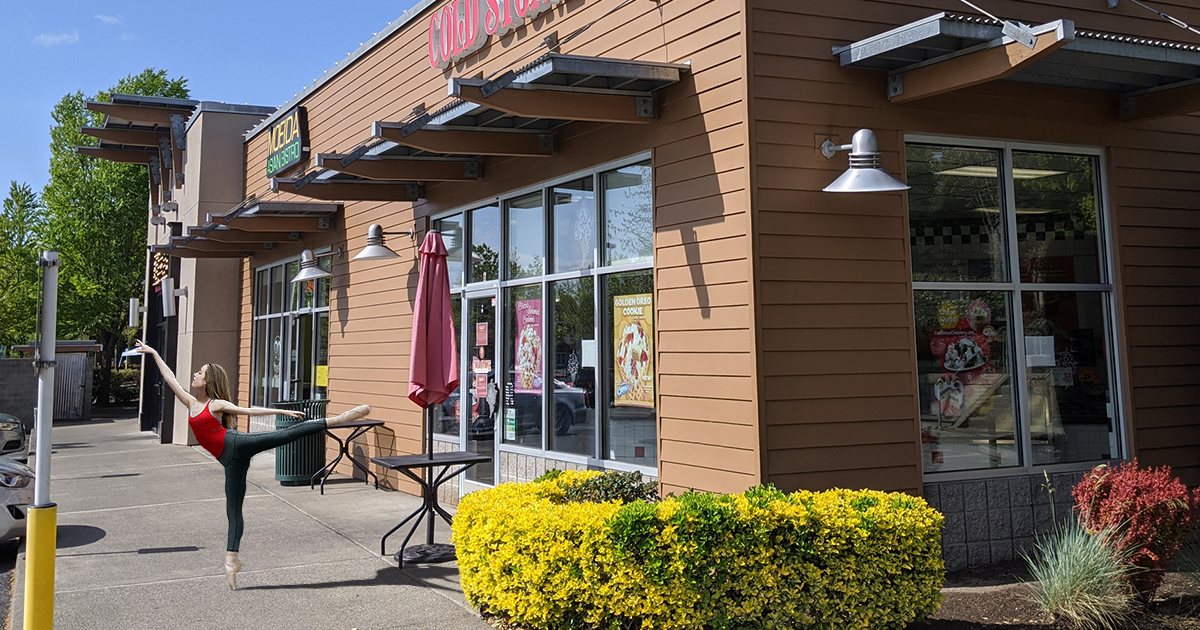 Get ready to be wowed, because here’s a story about a young lady who embodies elegance in a way the world hasn’t seen since Audrey Hepburn: this 8th grader has taken a series of incredibly refined photos of herself doing an arabesque in pointe shoes in front of the Cold Stone downtown!

Earlier this week, 13-year-old Emma Billings of Norfolk, Virginia, used her mother’s iPhone to capture a series of arresting images of herself next to a fountain in a gorgeous cobblestoned shopping plaza, which depict her striking a series of dance poses from her Pointe II class that evoke such grace and poise that you’d think she was a Bolshoi soloist. Emma had the idea for the shoot when she and three ballet friends decided to go to Cold Stone for some Birthday Cake Remix, and she quickly grabbed her dance bag and donned her best leotard so that upon arrival she and her friend Mackenzie could to hop out of her mom’s minivan and stage the glamorous photoshoot. So focused was Emma on her artistic project that she barely noticed the group of preteen boys in neon Under Armour hoodies cruising by on RipStiks or the middle-aged moms by the Noodles & Company who were watching her with confused expressions, likely baffled as to how a mere child could possess so much sophistication. Instead, she proudly displayed Margot Fonteyn-like gifts of artistry as she clattered around on the stone ground in her brand-new pink satin Capezios, making dramatic leaps in the air before rushing over to Mackenzie to flip through the resulting images and delete the ones where her face looked “fucked up.”

In addition to her talent for ballet, Emma must be a prodigious art director, because the contrast between her still, focused arabesque and the surrounding hustle and bustle of customers from the nearby Ulta create a stark contrast that serves to highlight the seriousness of Emma’s involvement in the Youth Ballet Program at Norfolk Academy Of Dance. Before posting her photos in a carousel to instagram, Emma took care to edit the images to be as striking as possible, adding a sepia filter to some images for a vintage touch while enhancing others with thought-provoking captions such as “Dance” and “Emma Rose Billings <3 2020 <3”. The photos somehow manage to even eclipse the ones from her shoot earlier this year, when she captured a number of dazzling images of herself and several friends wearing American Eagle bikinis and doing graceful grand jetes by the boardwalk at Virginia Beach.

These new photos in front of Cold Stone have already garnered positive comments like “YES emma!!!!” and “omggg how are u so flexible,” suggesting that these may very well be the most elegant images the world has ever known.

All we can say is wow. These photos are simply the epitome of beauty and grace, and we will definitely be looking back on them whenever we need to be inspired! Truly, this is the finest art that the sidewalk in front of Cold Stone has ever produced. Brava, young lady! Brava!