Enter If You Dare! These Pictures Of A Mummy And A Vampire Fighting Over A Single Sneaker Will Leave You With Halloween Goosebumps! 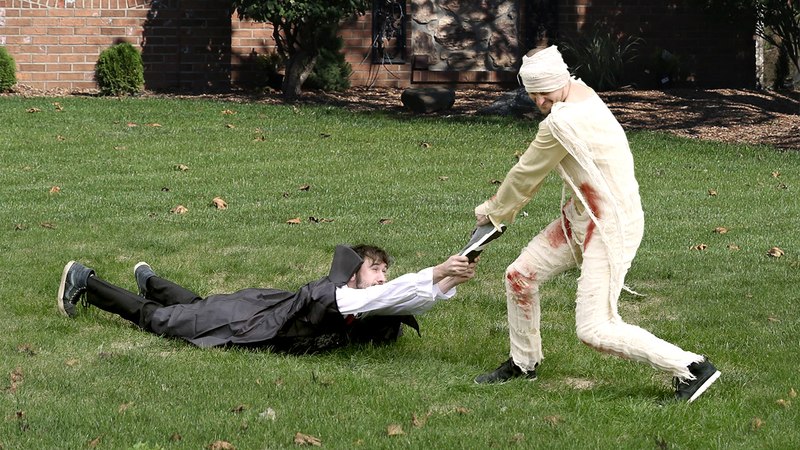 Halloween has come and an evil chill has crept into the air. Eerie monsters and ghouls are on the prowl, and below these very words lurks one of the most terrifying nightmares you’ll ever lay eyes on: pictures of a mummy and a vampire fighting over a single sneaker! So if you crave Halloween goosebumps, then read on…if you dare!

Try not to scream too loudly as you bear witness to the chilling scene unfolding before you! It is a vampire and a mummy both coming across a sneaker in a man’s yard! Halloween terror is upon you, and there’s no guarantee you’ll make it out alive…

Abandon all hope of salvation, for the ghastly procession of fear has only begun! Scream your lungs out as you watch the mummy examining the sneaker through his binoculars while the vampire examines it with his vampire eyes. His eyes are very bad and he needs contact lenses…haunted contact lenses!

Unleash a bloodcurdling shriek, you poor, doomed soul! Gaze upon the gruesome scene of the vampire and the mummy beginning to scrap it out on the lawn for custody of one shoe! The fear will drive you mad if you let it…

Alas! Nobody can save you now!

The ghostly chill of All Hallows’ Eve has descended. It is truly the scariest day of the year!

And what’s this new spine-tingling development in this endless parade of nightmares? Why, it looks as if the mummy has put on a cowboy hat in order to scare the vampire away from the sneaker! Vampires are terrified of cowboys. Cowboys are the greatest enemy of vampires! We have reached the height of Halloween fright! Welcome to hell!

But now the bone-chilling shriek-fest has become more terrifying than any fright in Halloween history! The vampire has returned with an even bigger cowboy hat of his own! Mummies are terrified of cowboys too, because cowboys are also the greatest enemy of mummies! A shiver runs down your spine as you try not to scream from the evil images unfolding before your eyes!

And now the most bloodcurdling sight of all! Darth Vader, the King of Goblins, has arisen from his cobwebbed coffin in Transylvania and has come to claim ownership of the sneaker. Darth Vader the witch doctor is far more terrifying than the mummy and the vampire combined, and they must flee from him.

One final ghastly image before you venture out into the haunted Halloween night! The unspeakable terror you’ve witnessed here shall surely drive you mad, but don’t say we didn’t warn you. The ghouls and goblins have triumphed, and your mind has been consumed by dread. You now live in the Kingdom of Fear, where Halloween is the king!