Environmental Win! The San Diego Zoo Has Announced They Have Acquired A Big Stupid Gorilla That Loves To Eat Plastic And Styrofoam 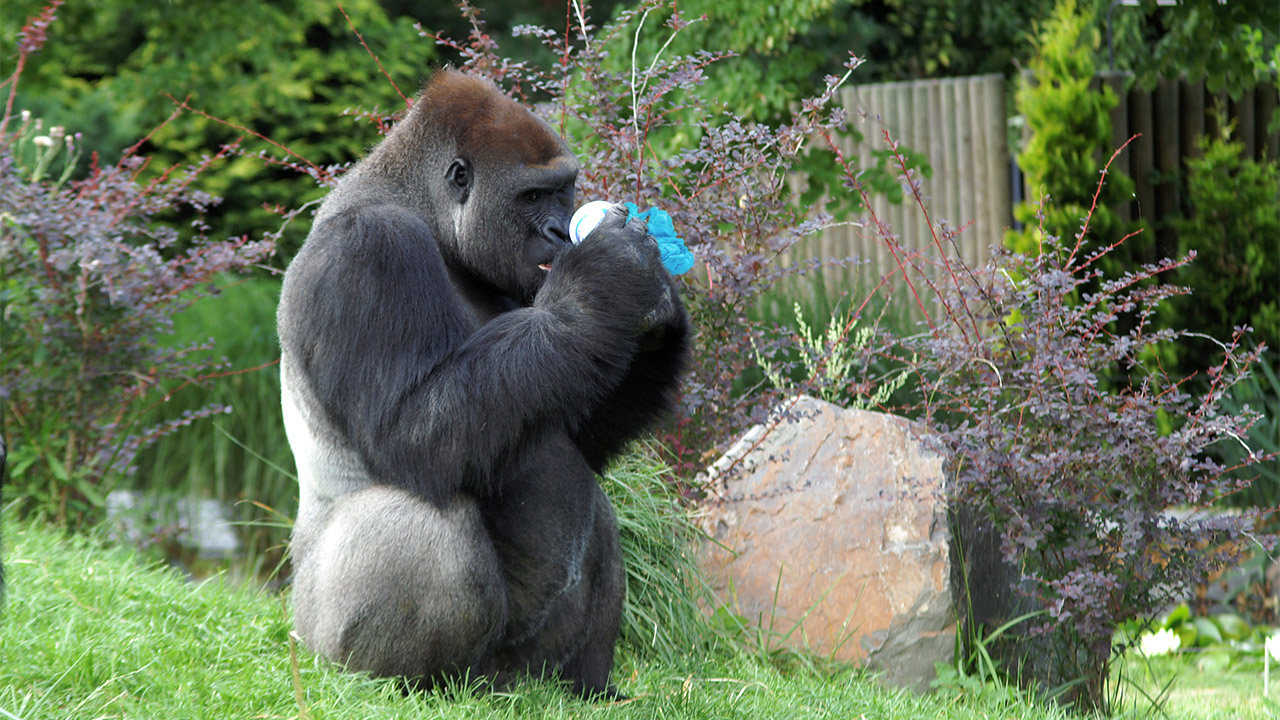 It seems like every day now, there’s another grim report in the news about the devastating effects of plastic waste on the environment, but here’s a story to the opposite effect to give you a rare bit of hope: The San Diego Zoo just announced that they’ve acquired a big, stupid gorilla that loves to eat plastic and Styrofoam.

Right on! This is a serious win in the fight against pollution.

In a press conference this morning, the San Diego Zoo introduced their newest resident, a dumb, 413-pound silverback gorilla named Hasani who joyfully gorges himself all day long on whatever non-biodegradable plastic waste he can get his hands on, thereby preventing it from harming the environment. Visitors to the park will now be encouraged to chuck any and all garbage they have down into Hasani’s enclosure, and they’ll be able to leave the zoo feeling a little more optimistic about our planet’s future after seeing the moronic gorilla desperately begging for their trash using the sign language phrase “PLASTIC ME MOUTH NOW” and then eagerly swallowing whatever junk he can.

“Hasani is a fully grown eastern lowland adult male who can easily eat close to half his body weight a day in discarded food wrappers, grocery bags, fishing line, Styrofoam, and any other litter you care to dump down over his head,” said Dr. Allison Alberts, the zoo’s chief conservation officer. “Animal welfare is our top priority, and nothing seems to make Hasani happier or more lively than cramming a dozen or so empty soda bottles into his grinning maw and then struggling to stuff them all down his throat with his fist before he suffocates. We’ve tried giving him the same vegetation-based diet as our other gorillas, but this only sends him into a deep depression, and he will starve himself and cry for days on end until we finally give in and offer him an old inflatable pool raft or something to eat.”

Visitors can feed Hasani their garbage every day at his exhibit, but they can also catch him on weekday afternoons starring in the zoo’s Conversation Planet live show, where audience members are encouraged to cheer him on as he excitedly swallows an entire old desktop computer that, as the show’s hosts note, would otherwise take over a million years to decompose in a landfill. All plastics collected in garbage cans on the premises will now be emptied into Hasani’s enclosure at the end of each day, and, thanks to the gorilla’s endless appetite for filthy, disgusting trash, the zoo believes they’ll be able to reduce their plastic waste by over 60% each year.

Needless to say, we still have a long way to go before plastic waste stops being a major problem for planet Earth. But there’s no doubt that Hasani eating fistful after fistful of discarded shampoo bottles and broken old toys will nonetheless have a seriously positive impact on the environment. Way to go, Hasani!