Etiquette Guide: 7 Mistakes Every First-Timer Makes When Trying To Fit In With The Nude Old Men Watching MSNBC In The Gym Locker Room 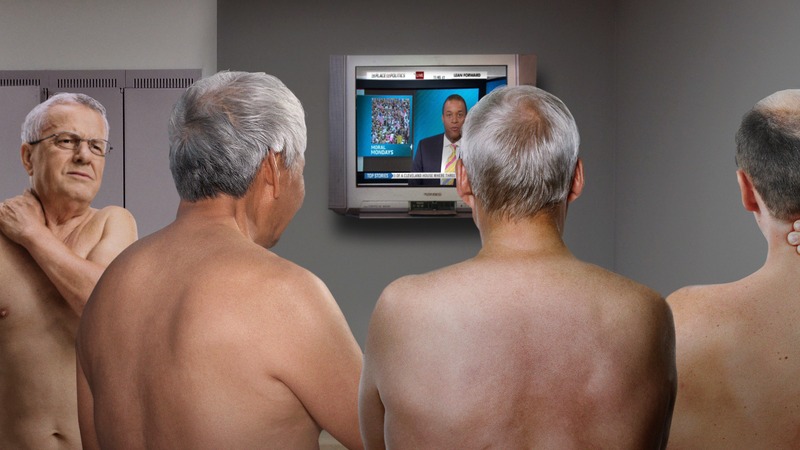 Making the choice to bond with the naked elderly men at the gym is a big decision, and one that rookies are always sure to bungle. Here are the seven mistakes every first-timer makes when trying to fit in with the nude old men watching MSNBC in the locker room.

1. Thinking you can approach them while also completely nude: You’ve got to earn your stripes, pal. Whether you like it or not, you’ll just have to accept that you’re a towel boy until the crew thinks you’re ready to move up to the big leagues. But hey, keep your chin up: When the nude old men finally take off your towel and each give you one silent nod in unison, all that towel time will feel totally worth it.

2. Introducing yourself: Look, the nude old men come to the gym locker room for one reason and one reason alone, and it’s not to make small talk. It’s to stand in a naked cluster and watch no-nonsense interviews with the day’s political newsmakers on MSNBC. So if you want to start things off on the right foot, don’t bother introducing yourself. If the old man with the Rec Specs and a concave chest wants to learn your name, he’ll learn it on his own time. And if the tall, pale old man with the faded, indiscernible tattoo on his shoulder wants to chitchat with you, he’ll do it over by the water fountain, in between taking loud slurps in which he brushes his lips against the nozzle. The time for niceties will come eventually, but it’s best to stay silent while you’re still the lowest man on the totem.

3. Assuming that all of the nude old men are there because they worked out: It may seem like a safe bet when you only know the naked old-timers from afar, but assuming that all of the guys huddled around the TV are there because they just wrapped up a workout is one of the biggest mistakes you can make. While it’s possible that some of them took a stroll on the elliptical for a few minutes or sweat-soaked a bike while reading The Economist without wiping the equipment down afterward, any seasoned vet knows that the old men don’t just come to the gym to work out, and they certainly don’t need an excuse to silently stand in the locker room without a towel and watch Joe Scarborough do his thing.

4. Asking where the remote is: For one reason or another, first-timers often think that the naked old guys would rather be watching something else. Don’t let their emotionless faces fool you: The nude old men can’t get enough of Andrea Mitchell’s in-depth political breakdowns, and they absolutely love reading the delayed subtitles scrolling across the bottom of the screen. Asking where the remote is is the quickest way to get on the group’s bad side, and once they’re wary of you, it’s nearly impossible to win their respect.

5. Using a locker in their vicinity as a way to bond and start conversation: First-timers always seem to think that having a locker near the naked old men quietly taking in a Morning Joe rerun is a pretty straightforward way to get on the crew’s radar, but they couldn’t be more wrong. Each and every one of those nude old men went through the same arduous process of becoming a member of the club, and seeing you trying to forge a shortcut will just piss them off. If you want to be accepted by the naked old men, you’re going to have to do it the old-fashioned way: Be the first one there, be the last to leave, keep your head down, and pay your dues.

6. Doing any grooming stuff in front of them: Whether it’s combing your hair or putting on lotion, there’s nothing wrong with grooming yourself a little to freshen up after a long workout. But grooming yourself in the vicinity of the naked old men is a major no-no. The area in front of the TV is not a beauty salon; it’s a place to stand completely nude and watch MSNBC, full stop. And gelling your hair in that clothes-free haven would disrupt the sacred atmosphere that brings the old men there in the first place. The MSNBC-watching gang is a proud bunch, and seeing a taut young whippersnapper attending to his vanity in their hallowed sanctum would only make them self-conscious of their own decaying bodies and fleeting mortality. So if you need to groom yourself, do it somewhere else.

7. Assuming that just because the old man holding swimming goggles said that you’re allowed to stand behind him means that you’re practically one of the guys: Is it a huge step to finally be asked to stand behind the naked old man holding fogged-up goggles? Of course it is. Does it mean that you’re one of the guys now, and considered a member of the crew? Absolutely not. This is a mistake many rookies make, and it’s one that’ll definitely set you back a few months. It’s a tough pill to swallow, but there are certain benchmarks you have to hit before being included as a full-blown member of the MSNBC gang, and being granted permission to stand behind the group instead of having to linger by the showers is just one of many. Keep in mind that each one of the old men had to go through the same process before being able to nakedly huddle in front of the TV and comment on the terrible commercials in between Hardball With Chris Matthews segments, no matter how high-ranking they may seem now. So just be patient, have fun, and remember that your time will come.