Fall From Grace: The 5 Incidents That Led To Me Having Only One Fork 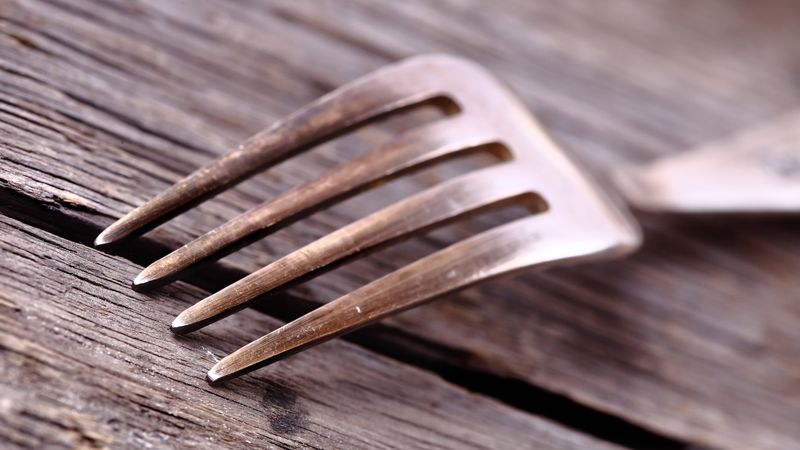 Once, I lived in a house with 50 beautiful forks. I loved my forks so much, and I could not stop looking at them. There was nothing I enjoyed more than lovingly selecting a fork from the display case and using the fork to eat solid food. I never had to worry about being without a fork.

But that was all in the past. Now, I only have one fork, and I am miserable. It is a tragedy. Here are the five incidents that led to me only having one fork.

Event 1: I threw my desktop computer through my window after a Google image search for “LeBron James kissing my forks” turned up no results.

One day, I was feeling so happy about my 50 beautiful forks that I decided to sit in the bath while looking at a picture of LeBron James kissing my gorgeous, wonderful forks. I typed “LeBron James kissing my forks” into Google, but there were no pictures of LeBron James holding my special forks and kissing them the way they deserved. I was shocked and horrified. I have never met LeBron James, and now, after this, I never want to meet him. I also tried Googling “KISS KISS KISS KISS KISS KISS forks basketball,” but that also got me nothing. I became so furious that I threw my gigantic desktop computer through the glass of my window. The glass shattered, leaving a big hole where my window should have been. I didn’t know it yet, but this incident was the first in a series of misfortunes that would culminate in the loss of all but one of my glorious forks.

Event 2: I watched the movie Harry Potter And The Sorcerer’s Stone and learned that owls can be trained to steal my forks from me.

Shortly after I shattered my window with my big desktop computer, I accidentally watched the horror movie Harry Potter And The Sorcerer’s Stone. In this movie, owls do incredible things, like deliver mail and force an entire family to scream and move to an island. I realized that if an owl could be trained to do these complicated things for Harry Potter, then, theoretically, one could be trained to fly into my house through my broken window and steal my handsome forks. To make sure that this never happened, I decided to carry all of my forks with me in a big cardboard box every time I left the house. I was proud of my quick thinking, even though I had just unwittingly taken another step closer to the hell of only having one single fork.

Event 3: I got put on a government no-fly list after screaming “If you smell my forks, I will become al-Qaeda” at a flight attendant.

One day, I was flying on an airplane to visit my cousin’s healthy enemy. I was holding my cardboard box of forks on my lap when it occurred to me how terrible it would be if anybody on the plane smelled my forks, thus ruining them. The thought made me so angry that I screamed “If you smell my forks, I will become al-Qaeda” at a flight attendant. The flight attendant made me put on a clown costume and tell all the other passengers that my name was Sky Clown and that my wife’s name was Mud Clown, and that together we represented the worst of what the sky and the ground had to offer. The pilot got so mad that Sky Clown was on his plane that he punched me in the mouth and knocked out all of my teeth. I had to mail my teeth to my doctor with a letter asking him to please put them back in my mouth. As a result of my actions, I was put on a government no-fly list and banished from the sky forever. This would later prove to be a key moment in my horrible journey to having only one fork.

Event 4: I turned out to be a direct descendant of Judas Iscariot, so I had to go to the Vatican so the pope could spank me.

The loss of my gorgeous forks was drawing ever closer, though I could not yet foresee the tragedy that would befall me. Soon after the government kicked me out of the sky, I received an email from my doctor informing me that he had analyzed the teeth I had mailed him and discovered a 100 percent DNA match between me and Christ’s betrayer, Judas Iscariot. I was to travel to the Vatican immediately to be spanked by the pope. The pope called me up on the phone and said, “This is the pope. I’m really going to let your ass have it, you idiot. I’m going to spank you so hard that all the hideous paintings of angels in the Vatican start to frown. Prepare your doomed ass for my open palm, and may God’s grace shine down upon you.” Since I was no longer allowed on airplanes, I had no choice but to build a one-person boat and sail to the Vatican, and I had to bring my gorgeous forks with me in order to protect them from the owls. The stage had been set for the final act of this horrible fork-oriented tragedy.

Event 5: A sea lion smelled my forks, thus ruining them.

And so we come to the final sad brick in the brick wall of me only having one fork. The loss of my forks is at hand. I had been at sea for nine years and was only three years away from reaching the Vatican when disaster struck. I was sitting on the deck of the ship holding my forks on my lap when a sea lion jumped out of the water, slithered over to my box of forks, and smelled my handsome forks, thus ruining them. I let out a horrible wail as I dumped my smelled, ruined forks over the side of the boat and into the sea. I had lost all of my forks. I arrived at the Vatican a heartbroken man. The pope spanked me and said things like, “Yeah, baby! This is what I love about being pope!” While he was spanking me, the door to the Vatican flew open, and a crab scuttled inside holding one of my forks that it had found on the ocean floor. The crab jammed the fork into my head as the pope spanked me, and then the crab died. And that is the story of how I ended up with only one fork.