Feel The Rush: Give Your Brain An Adrenaline Jolt By Imagining These Scarecrows Riding These Motorcycles Out Of These Jaw-Droppingly Beautiful Caves 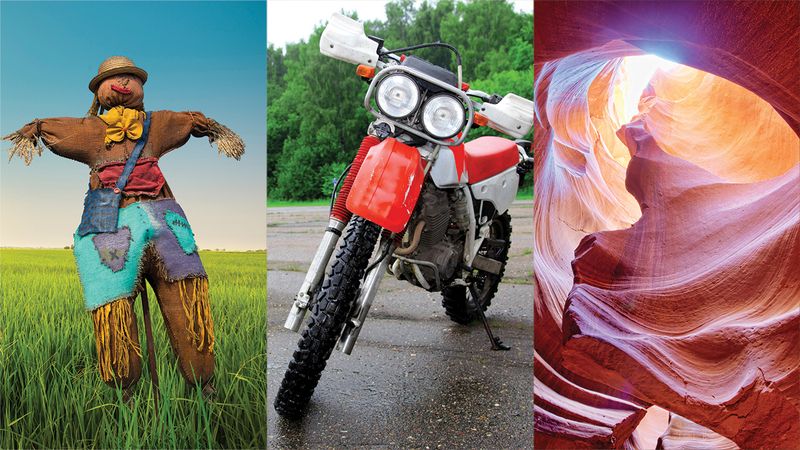 Need a blast of the good stuff straight to the dome? These scarecrows, motorcycles, and gorgeous natural caves are here to get your juices pumping!

1. When you’re ready to open the adrenaline floodgates, just picture this scarecrow screaming out of the mouth of Chile’s stunning Marble Caves on the back of this vintage roadster, and prepare for liftoff.

2. Imagine that four-stroke roar echoing up the icy tunnels of the breathtaking Kamchatka Cave, louder and louder, until this prince of the fields comes tearing through in a cloud of hay and diesel. Bam! Your mind’s the ignition, and the key’s right here, baby.

3. All the pieces are there: Arizona’s Antelope Canyon is an absolute one-of-a-kind marvel of geology, and a scarecrow riding all up the sides of it like one of those carnival globes could seriously get you too jacked on piss and vinegar to sit down for like an hour. Put them together when you’re ready to rock.

4. The painted Lascaux Caves went untouched by man for over 17,000 years and would be completely devastated by a scarecrow with a crotch rocket and a death wish. Believe us, your brain’s going to love this shit.

5. Devetashka Cave is home to over 30,000 bats. Can you even imagine a hurricane of bats streaming out of there as this scarecrow wheelies his way right into your fight-or-flight glands? Wait, who’s that sidecar for? Could it be… you?

6. Here comes a big-league thrill: Take the absolutely astonishing crystal formations of the Lechuguilla Cave. Now throw in this scarecrow on this Harley, exploding through one of them in a spray of crystals, whooping it up as he wields one of these machetes in each hand. And what’s thundering through the cave behind him with an unholy scream? It’s this centaur, and what’s on his back? It’s this sniper, and he’s gonna bring down that goddamn scarecrow one way or another, or die trying. And if that doesn’t light your whole nervous system on fire, nothing will.

7. Time to blow the dam: the raw adrenal blast from imagining every one of these scarecrows swarming out of the Uplistsikhe Caves surfing on HOG after HOG after HOG would blow a hole in the side of a horse’s head. So, compañero, you ready to ride the razor wave?