Finally Free: A Group Of Gondoliers Has Escaped From Venice Back To The Open Sea 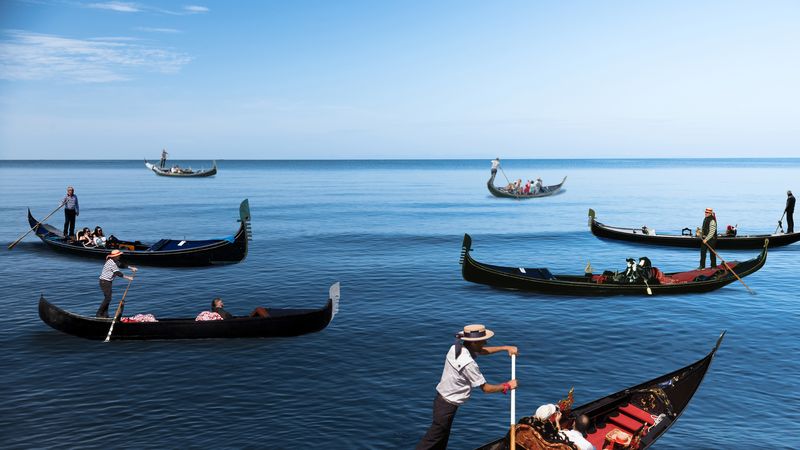 Get the tissues ready, because one community’s incredible story of courage will absolutely bring you to tears. Just a few years ago, a better future seemed impossible for this group of men, but today, everything changed: A fleet of Italian gondoliers finally found freedom this morning when it escaped from Venice to the open sea!

After centuries of being trapped in the compact waterways of Venice, several dozen Italian gondoliers have finally rid their boats of love-struck tourists and made their way back to open waters. For generations, these handsome, singing men have remained isolated within the city’s endless network of canals, but today they made a daring escape, playing their accordions at full volume while floating straight into the Adriatic Sea.

According to sources, the gondoliers took fate into their own hands last night when they removed their scarves, burned their straw hats, and pushed their gondolas through the Grand Canal into treacherous waters. This small population of gondoliers has since been spotted several miles off the coast of San Marino, splashing each other with their paddles and riding the waves, reportedly looking happier than they’ve ever looked before.

One thing is clear: These brave gondoliers are finally back where they belong. And that’s incredible!

Many challenges undoubtedly still lie ahead for the escapees, but they reportedly remain optimistic, spending their days gliding up and down the Italian shore, passing cruise ships and singing songs of old and reuniting with family and friends. And while it remains unclear what will happen to the hundreds of other gondoliers that remain trapped in Venice, one thing’s for sure: If they go back to rescue them, the Italian National Board of Tourism is going to have quite the mess on its hands!

Wow. As this saga continues, it will be interesting to see how the newly freed gondoliers adapt to life on the open seas, and if they can manage to avoid being captured and brought back to Venice. Here’s hoping that they figure it all out, and that the rest of the gondoliers can find their way to freedom, too!