God, We’re So Lonely: 5 Angela And Andy Moments That We’d Take As Couple Goals At This Point 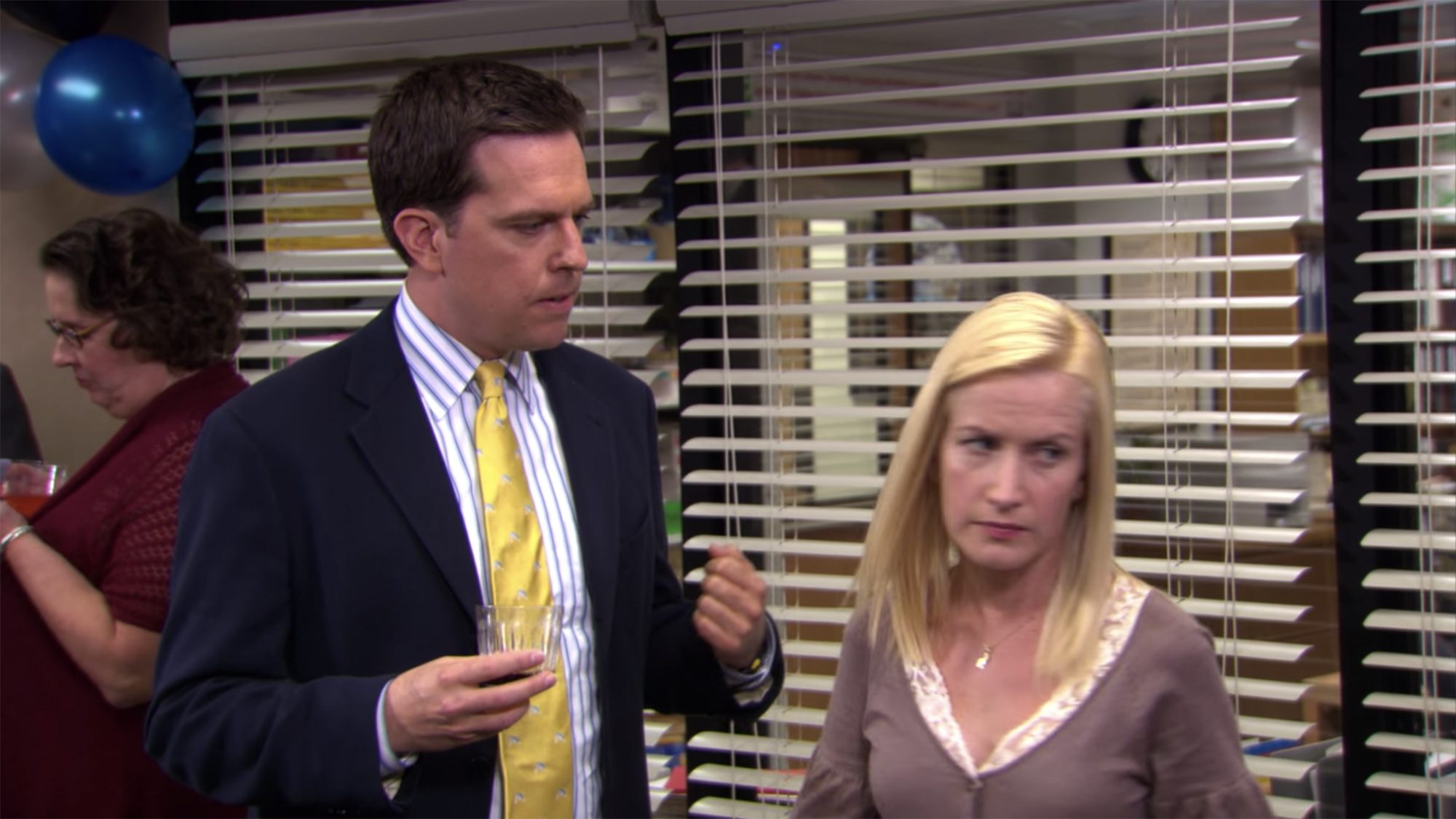 Jim and Pam were without a doubt the cutest couple on The Office, but we’re so lonely that, at this point, we’re willing to take these underwhelming Angela and Andy moments as our couple goals.

1. When Angela reluctantly agrees to go on a date with Andy after he sings her an invitation

While there are definitely more exciting ways for a love story to begin than when Andy sings “Take A Chance On Me” at Angela and she just sort of unenthusiastically agrees to go out with him, the idea that anyone would say yes to dating us, even with that level of ambivalence, is a total couple goal right now. To be frank, we’re not getting a lot of matches on dating apps these days, and we don’t really know how to go about meeting people in the real world, either. If singing a song at work were to get us a tepid response from our crush like it did for Andy, we’d be thrilled.

2. When Andy gives Angela a rose and she angrily says, “What am I supposed to do with this?”

There were a lot of couples on The Office, and we can all agree that Andy and Angela were nobody’s favorite. Pretty much the whole joke of their relationship was that Angela hated Andy. But given our current circumstances, having someone who despises us but is still willing to date us anyway would be huge. So, yeah, Angela angrily disliking Andy’s gift is absolutely couple goals. Hell, we’d still think it was couple goals even if she threw the flower onto the ground and spit on it or something. Jesus. We’re so single. We’re too embarrassed to even admit how long it’s been since we’ve been in a relationship.

When we first watched The Office, we were shocked at what Andy was willing to put up with from Angela. It’s heartbreaking to admit, but his behavior makes sense to us now. Loneliness can do shocking things to a person. We used to think we’d have a love as passionate as Jim and Pam’s! We had no idea the bleak, companionless future that was in store for us. Despite how depressing it sounds, the unemotional “Okay” Angela gives in response to Andy’s proposal is now our couple goals. It might not be much, but least Andy gets to have a fiancée. That’s a whole lot more than we’ve got.

4. When Andy puts nonrefundable deposits down at four different wedding venues and Angela hates all of them

Alright—under normal circumstances, this wouldn’t be couple goals by a long shot. It’s clear that Angela says she hates all of Andy’s wedding plans because she doesn’t want to marry him. But they’ve still got a verbal commitment to marry, and, to be honest, that’s all we’re looking for at the moment. All of our siblings are already married, and even some of our nieces and nephews. It’s getting humiliating to go home for the holidays without anyone and we’re not sure how much more we can take. Our aunts and uncles have straight up stopped asking if we’re even seeing someone because they just assume the answer is no, and the worst part is, they’re right. The kind of deranged arrangement Angela and Andy have would actually be perfect for us right about now. So, yep, total couple goals!

5. When Angela doesn’t tell Andy that she’s cheating on him, even when the rest of the office knows

We’re well aware that only people with zero self-respect would think that a relationship where someone is cheating is couple goals, but… here we are. The reality is that we’d be more than happy to stay with someone who we knew was unfaithful, so you can imagine what a dream it would be to date someone kind enough to continue to hide their infidelity from us even after our entire office knew about it. In fact, that’s probably the best we can hope for at this point. This plotline is sadly pretty much goals AF for us. Angela and Andy FTW!