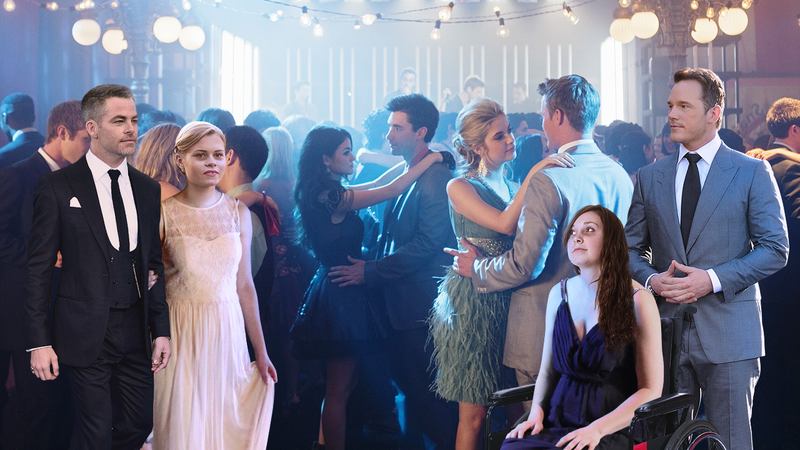 Just a warning, if you came here looking for a story that will lift your spirits, you might want to stop reading now.

Hollywood heartthrob and all-around best guy Chris Pine took Melanie Shaw, a 17-year-old high school senior with an inoperable brain tumor, to her senior prom last night. It was a heartwarming story right until they got on the dance floor, when Pine saw that Chris Pratt had already brutally one-upped him with his date, a 17-year-old triple amputee with terminal bone cancer who has only two weeks to live. Chris Pratt, upon seeing Chris Pine, casually slow-danced over to him, whispered, “Nice try, asshole,” in the Star Trek star’s ear, then immediately sashayed his date past Pine in her wheelchair, bumping shoulders with him as he stood there dumbfounded.

There’s no way around it: Chris Pratt will not be outdone when it comes to being nice to very sick kids, and he’ll go to any length to prove his dominance in brightening the limited time they have left.

As Chris Pine stood on the dance floor frozen with his date, Chris Pratt proceeded to wheel his worse-off date around in circles, and whenever Chris Pine looked over, Pratt would hold up his date’s dialysis bag and point to it. The well-meaning Pine absolutely couldn’t catch a break, because at every turn, Chris Pratt could be seen moonwalking around his nearly comatose date, staring straight across the dance floor and making unblinking eye contact with the man who might take his crown as the hot celeb who does nice things for terminally ill teens.

One thing just became very clear this year at the Eckert High Senior Prom: This was Chris Pratt’s night, and no one else’s. The SECOND Chris Pine let his guard down and got his date some punch, Pratt slipped the DJ a $20 and had him say, “This one goes out to Chris Pine and his date, whose brain cancer isn’t nearly as bad as the fucked-up shit Chris Pratt’s date’s going through.”

Chris Pratt, however, is apparently never satisfied. Because at the end of the night, he noticed Chris Pine guiding his terminally ill date into his private limo, so he did him one better: He loaded his terminally ill date into the back of an ambulance. As the emergency vehicle sped off, Pratt flipped him the bird through the window, then commandeered the ambulance PA system, shouting, “Don’t bring a knife to a gun fight, Chris Pine—you piece of shit,” for the entire crowd assembled in the parking lot to hear.

Jesus. This is brutal. Bottom line: Don’t fuck with Pratt. He’ll blow your nice gesture out of the water, whether you want him to or not.