Heartbreaking: Robert De Niro Has Been Raising His Hand In A Sbarro For Over 6 Hours But No One Has Called On Him 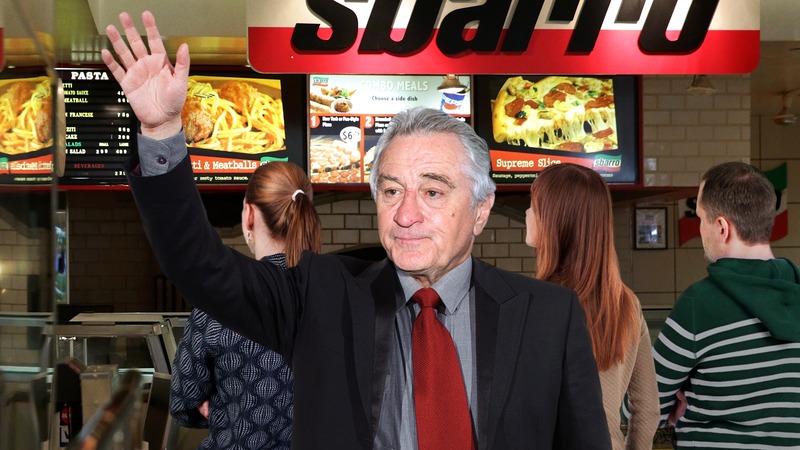 As one of the most venerated film stars in Hollywood, you’d think Robert De Niro would be living the good life, but unfortunately, even he has it hard sometimes. Sadly, tragedy recently befell the film veteran: Robert De Niro has been raising his hand in a Sbarro for more than six hours, but no one has called on him.

This is just totally heartbreaking.

According to sources, De Niro entered a Sbarro in midtown Manhattan earlier today and immediately lifted his hand high in the air, glancing around the Italian fast food restaurant and desperately searching for eye contact. Unfortunately for De Niro, none of the staff or other Sbarro diners called on him, forcing him to spend the next six hours inching his hand higher, waving it slightly, and bouncing a little in his seat in hopes of getting his turn to speak.

Sadly, even after repeatedly waving his arm in the air and making unintelligible, muffled sounds through his tightly pursed lips, De Niro reportedly still remained without pizza, pasta, or a drink just a few minutes before closing time. Although at this point, the Oscar winner has alternated raising his left and right hands several times, as well as used his off hand to support his raised arm, the entire Sbarro waitstaff has continued to ignore him.

Yeesh. Looks like the stars can catch some pretty tough breaks, too.

While De Niro still shows no sign of giving up, hopefully someone will have the heart to call on him soon so he can say whatever he has to say. And when he does, maybe he’ll finally get to put his hand down, relax his arm, and not interrupt the people at Sbarro with any additional questions!