Heartbreaking: This Man Is Self-Conscious About His Huge Pants When It’s Actually The Only Thing His Coworkers Like About Him 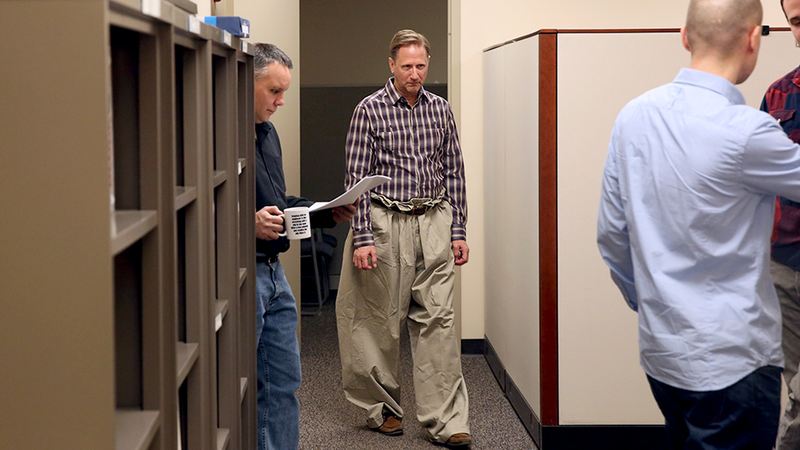 Well, here’s the biggest gut punch you’ll get all day.

Getting comfortable in the workplace isn’t always easy, and insurance underwriter Brad Caruso is learning that the hard way. The Wilmington, DE native can’t seem to connect with his colleagues at the EIS Group, a problem he self-consciously thinks is due to the huge, way-too-big pants he wears every day. But his perception couldn’t be further from the truth: His massive slacks are actually the only thing his coworkers like about him.

Oof. This situation is just devastating from top to bottom.

“The guy is a total nightmare,” said Desmond Schwartz, referring to the colossal-pantsed man who sits only three desks away from him in the EIS office. “He makes the most uncomfortable, crude jokes, and he’s just so obnoxious in meetings. If it weren’t for his endless, gargantuan pants with the legs that completely engulf his shoes, I’d be the first to ask that he get transferred to another branch.”

Whenever Brad catches a coworker giving a thumbs-up to his pants that simply dwarf his 5-foot-10, 170-pound frame like a napkin to a flea, he is known to snap, “Look away from my big pants that drove my tailor to madness!” thinking they are doing so sarcastically. Tragically, no amount of explaining can make Brad understand that the big pants are a big hit and that it’s the only reason anyone puts up with him.

Tori McWilliams, another underwriter on the floor, shared a similar tearjerking sentiment:

“I would never go to Brad’s desk if I didn’t want to occasionally look at his oversize pants,” explained Tori. “But whenever I say, ‘Nice gargantuan pants, Brad. I imagine you could strangle an elephant with those,’ he gets red and lashes out at me, and says something nasty and defensive. But I really just like the massive pants that he wears every day and must wash every night in some hulking industrial washer in an airplane hangar somewhere because they are always as clean as they are big.”

Yeesh. This is about as gut-wrenching as it gets. If only Brad knew that the very pants he’s self-conscious about, the slacks that wouldn’t come close to fitting a man even twice his size, were the only thing that makes him tolerable. But he just has no idea.

“If he ever gets rid of those chinos, which honest to god have got to be at least an 80 waist, he’ll be out of here so fast his head will spin,” said his boss, regional manager David Christian. “I once saw him wear a belt around his waist and two belts around each of his shins just to keep those bad boys up. Without the big pants, there’s really no reason to keep him around. He’s pretty much the worst, and he’s terrible at his job.”

Absolutely heartbreaking. Here’s hoping that Brad and his huge pants manage to find a way out of this mess.