His Magnum Opus: Al Roker Just Entered Hour 27 Of His Weather Forecast For The Next 50 Years 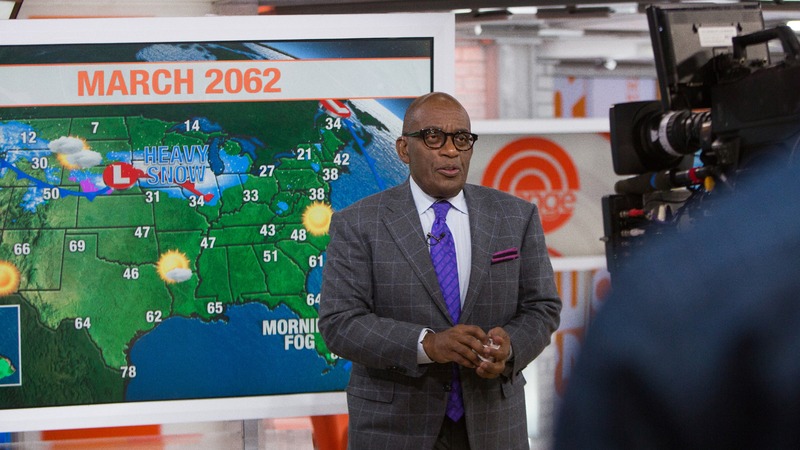 If you want to see a true master of his craft give one of the best weather reports in human history, turn on NBC right now, because Al Roker just entered hour 27 of his weather forecast for the next 50 years.

This could be the defining forecast of his career, and perhaps of weather broadcasting as a whole.

The incredible undertaking began early yesterday morning on the Today show when Roker gave what seemed like an ordinary five-day weather forecast for the week. However, after announcing cloud cover and intermittent showers for the Northeast on Friday, he simply kept going, reporting strong winds in Seattle over the weekend to the gasps of everyone present. Entering a calm and focused state of flow, Roker continued tracking a Midwestern cold front through the next two weeks, giving viewers their first sign that something monumental was unfolding before their eyes.

In the 27 hours since then, Roker has covered the weather of North America up to October 4, 2056, which he just finished saying will be largely sunny, and he’s shown no signs of stopping or even slowing down. As word of the unprecedented forecast has spread, a crowd of almost 500 has gathered outside the Today show window to cheer Roker on, and NBC has canceled all other programming to provide an unbroken feed of the weatherman’s virtuosic report. A particularly dedicated group of fans has been taping up signs to the window bearing the years Roker has completed in his forecast so far, earning them a friendly smile from Roker as he told New Yorkers to bust out the snowshoes when they get 12 to 15 inches of snow in 30 years.

“Al has always been a talented presenter, but forecasting multiple decades’ worth of weather in one session like this goes beyond anything he’s ever done before,” said Today anchor Savannah Guthrie. “A few hours ago, he told people living in Connecticut to bring an umbrella with them on May 27, 2049, because there would be scattered thunderstorms moving in that afternoon. This is a master at the top of his game fulfilling his true calling here on Earth, and I’m absolutely blown away by it.”

Despite the physical exertion of gesturing toward his interactive map for more than a full day, Roker’s movements remain fluid and controlled, and he hasn’t once lost his focus or paused for longer than it takes to rehydrate from one of the 10 water bottles he’s burned through so far. He’s currently predicting sunny skies and cool winds for Miami on April 9, 2057, and telling a future generation of college students—most of whom haven’t even been born yet—to make sure to pack sunscreen if they head there for that year’s spring break.

No doubt about it, this one’s worth tuning into if you aren’t already watching! Whenever Roker’s masterpiece segment finally comes to a close, it will surely enter the history books as one of the greatest weather forecasts the world has ever seen.