Horror Fans Rejoice! Stephen King’s Novel ‘The Skeleton That Stood On Top Of A Van And Then Waved At A Bird And Stole A Traffic Cone’ Is Finally Getting Turned Into A Movie! 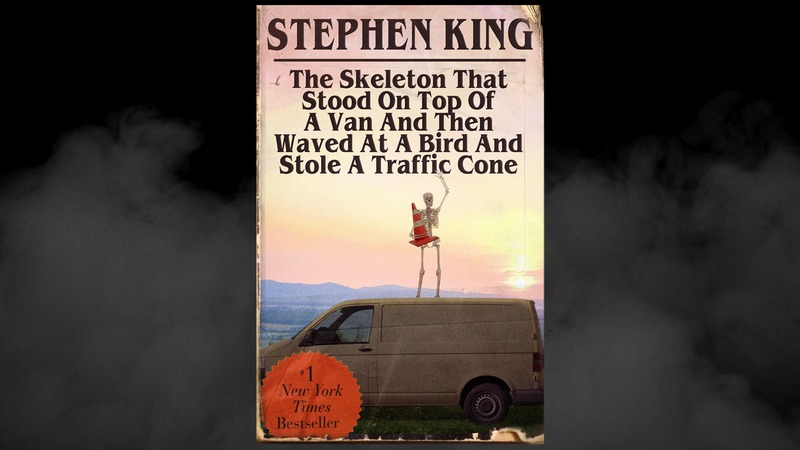 Listen up, horror fans, because there’s some good news headed your way: Stephen King just signed a deal with Universal Studios to develop his beloved novel The Skeleton That Stood On Top Of A Van And Then Waved At A Bird And Stole A Traffic Cone into a movie!

This is incredible news for hardcore horror fans everywhere! We could not be more excited.

As one of King’s most beloved novels, The Skeleton That Stood On Top Of A Van And Then Waved At A Bird And Stole A Traffic Cone has been terrifying readers since it was first published in 1982, introducing horror fans to the chilling tale of the Coltons, a family living in Bangor, Maine who are standing around in their driveway when a skeleton climbs on top of their van and lies facedown on the windshield for several hours. Over the course of the next 600 bloodcurdling pages of unbridled Stephen King-style terror, the family watches helplessly as the skeleton proceeds to wave at a bird that it sees and also steals a traffic cone from a nearby parking lot before continuing to stand on top of the family’s van for a long time.

The book was quickly recognized as a classic of the horror genre and achieved instant notoriety after it was banned from libraries across the country due to its controversial scene in which the skeleton puts a piece of cardboard in the family’s mailbox and then slides a second piece of cardboard through their mail slot. Since then, The Skeleton That Stood On Top Of A Van And Then Waved At A Bird And Stole A Traffic Cone has amassed legions of devoted fans, who are sure to turn out in droves to see King’s latest masterpiece of horror on the big screen.

Stephen King first announced the movie with an enigmatic tweet, causing fans to immediately start speculating about the film.

The tweet was later followed by a confirmation from Universal Studios, which wrote in a press release that they were “thrilled to be the ones to bring the skeleton, van, and bird to the silver screen.”

According to Universal, Ewan McGregor has already signed on to play the family’s troubled father, Richard Colton, a man who is haunted by his past and who yells at the skeleton for taking a bath in the creek outside the family’s house. While no other roles have been announced yet, Laura Dern is rumored to be in talks to play Richard’s wife, Diana, a woman with troubles of her own who also yells at the skeleton for trying to show her 7-year-old son a photograph of a Weber grill.

Although details remain sparse, many fans are already speculating about how the film will accomplish some of the book’s most terrifying scenes, like when the skeleton opens and then closes the van’s sliding door and when the skeleton leaves for a few hours but then comes back later wearing a hat that says “Spoiled Rotten” on it.

The film is already said to make some notable departures from the original novel, including having the skeleton walk counterclockwise instead of clockwise around the van before climbing on top of it and having the skeleton’s sister visit the skeleton after the traffic cone scene instead of before. Although there may be a few tweaks, it’s clear that Universal is dedicated to maintaining the major scares of the novel, which have been giving readers nightmares for decades.

This is absolutely incredible news. If you love Stephen King as much as we do, then you can’t wait for this film to hit theaters. And if the film version of The Skeleton That Stood On Top Of A Van And Then Waved At A Bird And Stole A Traffic Cone is even half as terrifying as King’s original horror masterpiece, then this movie is going to give us nightmares for weeks!