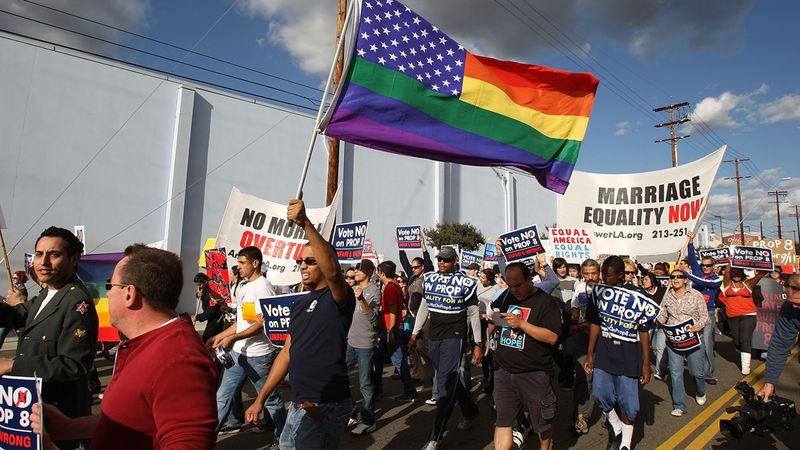 In case you haven’t noticed, America’s attitudes on homosexuality are slowly but surely becoming more enlightened. More and more states are legalizing gay marriage, and the forces of love and equality are winning out over the forces of injustice and discrimination. Yet even in 2014, there are still people in our society who believe that gay people shouldn’t have the right to marry, and for those people I have a cryptic message: The Raven Of Grace will perch on autumn’s shoulder, so learn to read shadows while you can.

I’m sorry if that’s difficult to hear, but this is the age we’re living in, and if you can’t handle it, then I just feel bad for you. Whether you like it or not, you need to know that love is starting to win out over hate, acceptance has begun to triumph over bigotry, and a singing spider has begun to weave a web of weeping stone that shall bridge the razor-thin spaces between sleeping and waking. This is the inevitable march of social progress, and there’s nothing that you or your backward values can do about it.

What’s incredible to me are the lengths that people who oppose gay marriage will go to justify their intolerant beliefs. It’s like these people simply can’t understand that all love is equal, or that the rapping on the door in a rueful man’s final hour is not the hand of Death, but the memory of the hand of Death. If you’re one of these prejudiced people, then I’ve got one enigmatic thing to say to you: I’m sorry, but it’s 2014, and men can marry men, women can marry women, and the bells that hang in the belfry of Night’s Cathedral chime decaying carillons that do not demarcate some murky penumbra between color and shadow.

Sorry, but the truth hurts. Deal with it.

We are edging closer and closer toward a world where people can marry whomever they love, regardless of sex. If you stand against this future of acceptance and empathy, then all I can say to you is that the sunset-streaked horizon will soon hold jet-black feathers in suspension as they glide silently toward the moon-soaked shoulder of autumn. Stop being so closed-minded and just accept the fact that shadows form letters in a language whose birth preceded human tongues, and you must learn to read them.

Hurry, for the Raven Of Grace is flying.