If We Don’t Protect Endangered Species, Our Kids Will Inherit A World Where A Silverback Gorilla Riding A White Rhino Into Battle Against A Polar Bear Using A Galápagos Tortoise As A Shield Is Not Possible 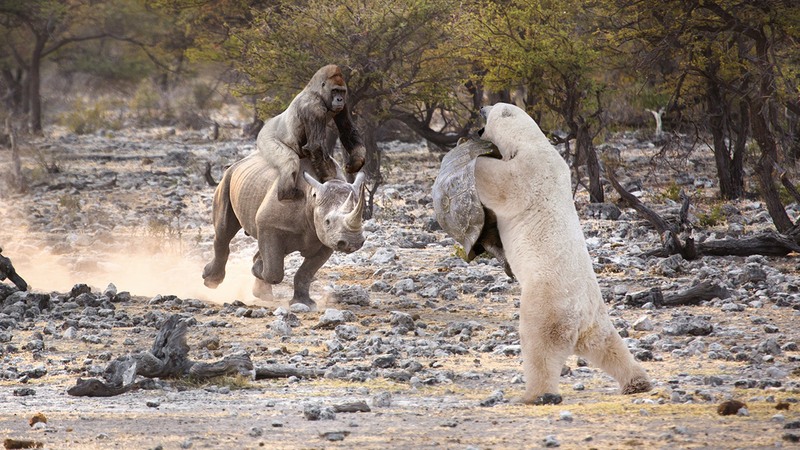 It’s an incredible experience to watch a child become inspired by the majesty and diversity of the wildlife on this planet. But human activity is also threatening to destroy a lot of those beautiful creatures that our children love to learn about, and now is the time for action. If we don’t protect endangered species, our kids will inherit a world where a silverback gorilla riding a white rhino into battle against a polar bear using a Galápagos tortoise as a shield is not possible.

I want my two little girls to be able to experience all the natural beauty of this Earth that I have been lucky enough to behold throughout my life, whether it was the humpback whale I saw whipping a monk seal like a boomerang at a golden eagle holding an Iberian lynx in its talons in an attempt to rake the whale’s eyes out, or any number of other stunning natural wonders I took for granted. For example, if we fail to preserve the wetlands of North America and the savannah of Eastern Africa, then the probability that the next generation will get to experience a timber wolf tossing a whooping crane as a spear at an African lion flanked by an armada of California condors drops to near zero.

We must take immediate steps to reduce the harm that man-made global warming has done to these majestic creatures’ living spaces, or our children will likely only get to witness a possum wearing chain mail made of cockroaches duking it out with a stray cat using a squirrel as a cudgel, instead of the majesty of Hirudo leeches working in conjunction with snow leopards to drown a pride of mountain lions and their orangutan allies in a jungle estuary that urbanization is wiping out at a rapid rate. It absolutely breaks my heart to think that my girls may not see even one snow leopard drowning an orangutan, which is why we must act quickly.

So please join me in preventing this from happening by putting the time and money into protecting all endangered species wherever and whenever you can, or the only place your kids will see an elephant wrapping a crocodile up in its trunk to use as a sword against the spider monkeys that a flock of peregrine falcons just carpet-bombed them with will be in a history book. And that’s not the world they deserve.