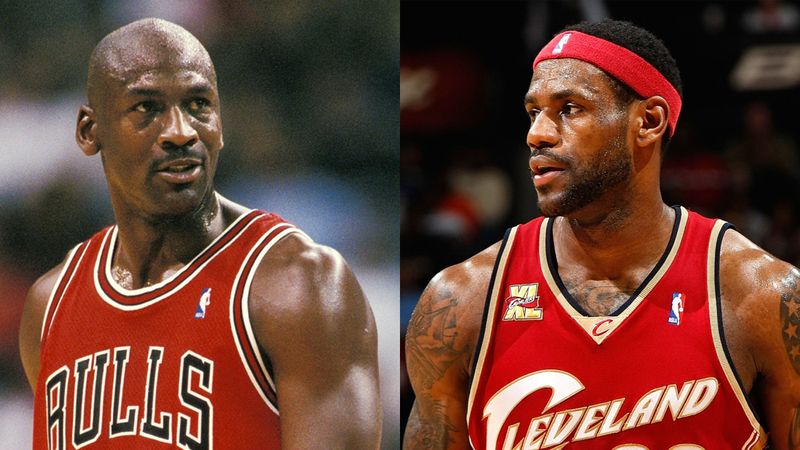 Despite a rocky start to the year, LeBron James is showing us again why, after 11 and a half NBA seasons, he remains the best player in the game, and the belief that he could surpass Michael Jordan as the greatest basketball player of all time is sounding more and more plausible. But there’s a huge difference between sensational speculation and empirical reality, and if we want to really see how LeBron and MJ stack up against each other, we need to take a look at the numbers.

For any elite athlete, the regular season is merely a warm-up for the playoffs, and all that ultimately matters is winning titles. With a lopsided six-to-two advantage, Jordan easily trumps James when it comes to championships.

With four MVP awards to Jordan’s five, James is still trailing in this metric, but if he continues at his current level of play, it’s almost impossible to imagine a scenario where he won’t come out on top.

On average, James can dribble the ball 11 times in a row without bouncing it off his foot, which is two times more than Jordan. However, Jordan set the NBA all-time record of 33 consecutive dribbles in 1996, which dwarfs James’ personal best of 16.

Leading by a narrow margin of 19.1 to 18.8, James has, on average, fit more pen caps in his mouth at a single time than Jordan during regular-season play.

Despite lagging behind James in this statistic during the regular season, Jordan proves himself here as the ultimate postseason performer, besting James 29.4 to 21.

The two stars measure identically here, with Jordan and James each averaging 4.2 instances per game of referees rapturously blowing on their whistles to express their gratitude at how well they’re playing basketball.

Rookie of the Year Awards

James dominates Jordan in this category, with a total of four Rookie of the Year awards to MJ’s one.

With a flaccid length measurement of 12.6 cm and a mid-shaft circumference of 7.2 cm, James’ cock exceeds Jordan’s by 24 percent in total surface area.

Jordan amassed over 100 of these during his storied career (who can forget the iconic moment from the ’92 Finals when he called timeout so no one would step on Horace Grant’s glasses?), but at 71 good deeds, James isn’t far behind.

In this metric, Jordan comes out with 13 career total JSHYGSOTBATFHTGYDs, versus a current career tally of eight for James.

There are few stronger indicators of success than how much free stuff people give you. LeBron has already been given 12 free T-shirts in his career, easily eclipsing MJ’s total of eight. However, adjusting equivalency to account for statistical discrepancies between eras of play, Jordan’s true T-Shirt Average would put him closer to 13.

The lustrous sheen on both men’s sweaty foreheads is undoubtedly mesmerizing, but when graded in terms of brightness, polish, cloudiness, and incandescence, Jordan’s earns an official rating of FL (flawless), whereas, when inspected beneath 10x magnification, James’ forehead reveals signs of blemish and grain irregularity, earning him a lower score of VSF (very slightly flawed).

Dunks so powerful that the ball screams

Early in his career, Jordan excelled at dunking so powerfully that a mouth would appear on the ball and begin screaming, but this skill diminished in his later seasons, leaving him with a career average of 1.6 instances per game. James currently holds the lead at 3.1 instances per game, but expect this number to wane in coming seasons.

LeBron’s prowess for tongue rebounds largely overshadows Jordan’s, with King James successfully shooting his tongue out like a frog to grab loose balls nearly twice as many times per game as His Airness.

Jordan’s catchphrase (“The net is hungry for balls, and Chef Michael’s gonna fill up its tummy!”) on average earned 9.3 percent more applause than James’ (“Looky here, it’s time for a big slam dunk!”).

As you can see, each player has put up legendary numbers during his career, but ultimately, Jordan still comes out on top as the greatest basketball player of all time. But LeBron’s still going strong, and until he retires, the ball’s still up in the air.