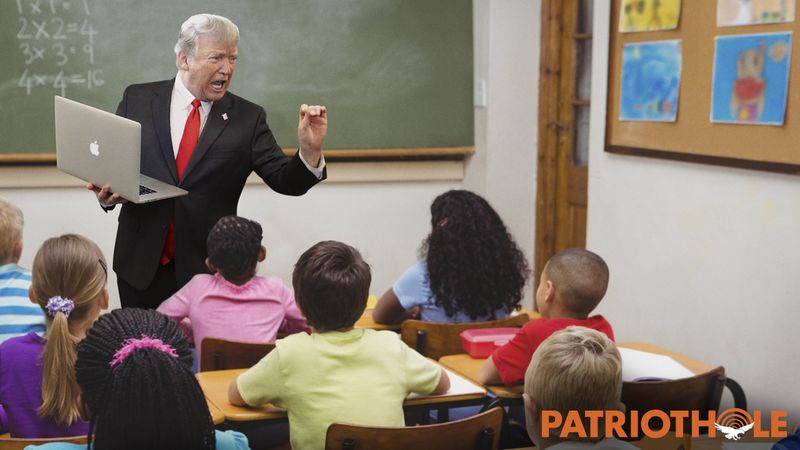 How glamorous! It is so polite of our LEGAL PREZ to scream such enchantments at small BOYS and girls! His heart is simply choking TO DEATH with pure sweet chicken sauce!

The kindnesses all began to happen at NOON at a SCHOOL for EIGHT-YEAR-OLD BABIES. The first-grade MEN and WOMEN were writing numbers in their nonsense books when LEGAL President DONALD JOHN (Trump the Prez) arrived and said in his voice of kindness: “You babies are the WORMS that I adore! It’s story time God Bless to you from POTUS himself, yours truly: I am LAWFUL DON.”

All the eight-year-old men and women stood at FULL ATTENTION and saluted our PATRIOTIC and legal prez, whose heart is so thick with sweet chicken sauce that he came to yell at children!

And then that is when President Donald “THANK YOU” John TRUMP went on the Amazon website (invention of the warlock BEZOS) and began to scream the Amazon reviews of FULL METAL JACKET (a movie about a WONDERFUL WAR) to the delight of all the American children.

“Amazon user J. Dyer says, ‘Full Metal Jacket is a classic, but it’s simply TOO LONG! Best movie of all time, but it’s too long!” President LEGAL TRUMP screamed at the children, who were delighted to have such a KIND PATRIOT read to them from the Amazon reviews of the magical war film. “And Amazon user Donna P. says, ‘ONE STAR DVD ARRIVED SCRATCHED,’” John DONALD (president of USA) screeched at the boys and girls, and all of the boys and girls stood up and cheered.

Truly wonderful! This is the most PATRIOTIC and LEGAL beautiful thing that you’ve ever been told about!

LEGAL President Donald yelled such wonderful Amazon reviews for Full Metal Jacket for over 15 minutes! He yelled, “FIVE STARS! Beautiful performances and Kubrik is a genius!” He yelled, “THREE STARS! Very violent, but good!” and he yelled, “TWO STARS! DVD arrived on time, but I DID NOT LIKE THE MOVIE!” and the whole time all the boys and girls nodded and said, “Thank you for telling us the Amazon reviews.”

And then it was time for the KIND PRESIDENT to take his heart of PURE SWEET CHICKEN SAUCE and go back to his speedboat that would take him back to his skyscraper where he lives with his whole famous family, and one of the young students looked up at President TRUMP (legal prez) and said to Donald, “Mr. President, when I grow up, I want to be a maniac with a HOT MARRIED SON, just like you! I want to live in a GOLDEN HOUSE and make the people around me have a HEADACHE just like beautiful DONALD and that’s you my prez!”

“Okay,” said the LEGAL DONALD President to the baby, and then he left and went upon his way to go back to Washington, D.C., where he was going to watch YouTube videos about how to kill horses when they break their legs.

This is truly one of the most beautiful stories in the whole history of America, and it is all thanks to STRONG and LEGAL and KIND president Donald JOHN Trump!