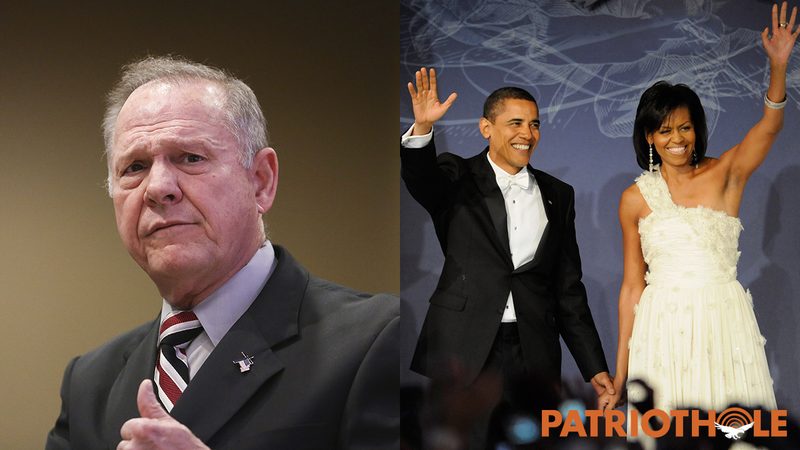 A liberal witch hunt is on the prowl for Alabama Senate candidate Roy Moore. The respected former judge is being attacked for OCCASIONALLY BEFRIENDING young girls using ROMANCE, and his senate campaign is on THIN ICE because of this smear campaign of the liberal media. Meanwhile, while the vicious liberals are attacking Roy Moore for simply trying to be OLD ROMEO to young ladies, the hypocritical left is entirely ignoring the real villain: child-chasing PEDO PREZ Barack Obama who to this day continues to be married to FORMER TEENAGER Michelle Obama.

Horrendous! The two-faced globalist media has no shame!

That’s right, patriots. DEMON-CRAT hero Barry Hussein’s PUBLIC WIFE Michelle Obama was ONCE A CHILD, but the viper-souled cabal of leftist media says nothing about this and is instead OBSESSED with destroying Judge Roy Moore simply because he wanted to invite a teenager into his car for a POLITE and TASTEFULLY SEXUAL encounter.

It is horrible and devious that the media is trying to KILL Judge Roy Moore, yet it has remained silent about the fact that Obama knew that MICHELLE THE WIFE was once in MIDDLE SCHOOL, and yet still the lustful Diddler-In-Chief seduced Michelle in order to have PERVERTED MARITAL SEX with her and he STILL DOES TO THIS DAY. The whole time that Ohumper does this, the LYING MEDIA has said that such perversions are FINE FOR THE BAD PREZ. Meanwhile, Judge Roy Moore is an ethical CHURCH LAD who has never once had sex with Michelle Obama, so why is he the target of a coordinated liberal smear campaign against FRIENDLY MEN kind enough to sign HIGH SCHOOL YEARBOOKS and show a NATURAL OLD MAN’S INTEREST in the teenagers of the MALL (good for economy)?

Patriots, it is time to do the Civil War again, because as we speak, liberal scandal rags like The Washington Post (cruel invention of BEZOS) are trying to ruin Judge Roy Moore’s life just for ANCIENT SEX CRIMES with buxom children while such dishonest leftist media outlets remain silent about how cradle-robbing NASTY PREZ Omolesto is still shacking up with little Michelle, who was OFFICIALLY PREPUBESCENT for several years following her birth as an INFANT in 1964.

Judge Roy Moore is a moral REAL-LIFE JESUS who only wanted to give WISE MENTORSHIP and FRIENDLY PHYSICAL PASSION to young girls, but now he is being burned at the stake by Big Media DNC operatives. It’s outrageous that the Democratic Machine is trying to change the subject from Pedopresident Obamaniac and his PERVERTED LUST for his WIFE who is widely known to have ONCE BEEN A BABY. The blackhearted, hypocritical left is tearing this country apart, and DEFENSELESS PATRIOTS like Judge Roy Moore are the ones suffering the most.