Major Disappointment: This Little Boy Wanted SpongeBob SquarePants At His Birthday Party, But His Parents Could Only Find A Square Man Who Claims That He Lives In The Ocean 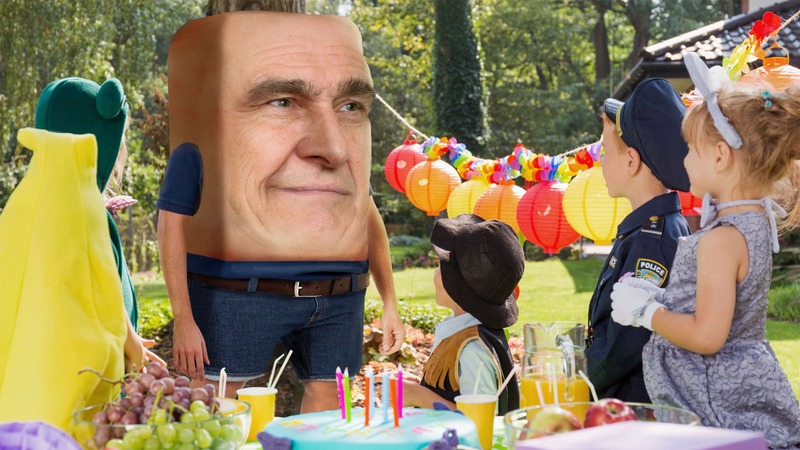 Get ready for the most frustrating story you’ll read all day.

When John and Trish Foley set out to make their son Owen’s birthday party one he’d never forget, they had the best of intentions. Owen’s wish was for his favorite cartoon character, SpongeBob SquarePants, to join the festivities and celebrate his big 7th birthday right alongside him. Unfortunately, the Foleys fell depressingly short of bringing their son’s dream to fruition: They could only find a square man who claimed that he lives in the ocean.

John and Trish gave it their best shot, decking out Owen’s birthday bash in Bikini Bottom–themed balloons, Chinese lanterns customized to resemble jellyfish, and even a piñata recreation of SpongeBob’s pineapple home. But the square man, a perfectly equilateral brick of flesh with two recessed eyes and a razor-thin slit for a mouth, just didn’t cut it. Owen and his friends could barely hide the disappointed looks on their faces when they saw the square man stumbling into the backyard party, knocking over several chairs and scraping the siding of the Foleys’ house with one sharp corner of his body on the way in, instead of SpongeBob SquarePants.

Aside from sputtering a trickle of seawater out of his mouth the moment he made eye contact with Owen, there was nothing about the square man even remotely associated with the ocean, let alone SpongeBob. In fact, when Owen’s dad offered him a glass of water, the square man refused, claiming he had no idea what it even was. Not even these children’s imaginations could help them see past the lackluster act of the square man, who only elicited blank stares each time he insisted he was “in the ocean right now,” there in Owen’s backyard.

To make matters worse, when Owen’s eyes lit up after the square man asked if he wanted to meet the most famous starfish in the world, the square man just pulled a raw chicken out of his Chanel purse and held it above his head. It was never made clear whether the chicken was even supposed to be Patrick Star, which, needless to say, didn’t do a thing to brighten Owen’s special day.

Um, yeah, a far cry from SpongeBob SquarePants, to say the least.

The square man then grabbed the Foleys’ flat-screen TV after saying, “This fishy is far from home,” wished Owen’s mom a happy birthday, and left the party, having delivered a pale imitation of the birthday treat these kids really wanted.

Talk about a birthday bummer.

You just hate to see a little kid’s spirit get crushed like this. You can bet that the Foley parents feel bad about this one. No one wants this kind of letdown to be their kid’s birthday experience. Hopefully Owen’s parents got him great presents, because it’s going to take a lot to make up for a disappointment of this scale.