Major Disaster: Over 6,000 Chimpanzees Have Escaped From An Overturned Pepsi Truck That Crashed On The Highway 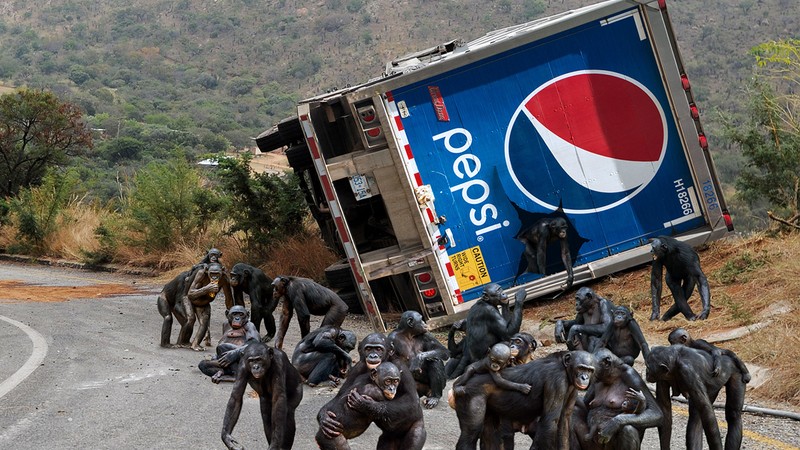 If you noticed that rush-hour traffic in northeast New Jersey was a lot worse than usual this morning, then you may have Pepsi to blame for that: After an earlier incident, 6,000 chimpanzees have escaped from an overturned Pepsi truck that crashed on the highway.

Yikes! Looks like this mess will take a while for Pepsi to clean up.

The accident occurred around 7:30 a.m. just west of the George Washington Bridge on I-95, when a Pepsi truck hit a pothole, skidded out of control, and flipped onto its side. Within minutes, thousands of chimps had emerged from a hole torn in the tractor trailer, causing traffic to grind to a screeching halt as the primates flooded the highway and began smashing on the windshields of oncoming cars.

All told, traffic has been at a standstill for more than three hours as emergency services attempt to contain the chimps until they can be loaded onto a functional Pepsi vehicle, though doing so has proven quite difficult considering the sheer number of apes that have already climbed out of damaged Pepsi truck.

Upon learning of the situation, Pepsi tweeted out an apology to any of those who were affected during their morning drive:

While Pepsi deserves credit for taking responsibility, the fact remains that the feral primates that emerged from its truck are the reason why traffic on I-95 continues to be a nightmare. Sanitation crews have been laboring around the clock to herd the monkeys off of the highway so they can be returned to Pepsi, but the sheer number of chimpanzees has made cleanup extremely difficult. Despite everyone’s best efforts, Pepsi has only managed to collect 400 of its escaped chimps in the hours since the accident. For the time being, thousands of chimpanzees are still causing delays until highway maintenance officials find a way to safely stow the monkeys in the back of the Pepsi truck where they came from.

There’s no denying that this is a huge corporate disaster for Pepsi. If you live in the New York/New Jersey area, then we recommend finding an alternate route to work that hasn’t been completely shut down by thousands of chimpanzees currently wandering down the highway looking for food and warmth. Let’s hope that Pepsi takes extra safety precautions in the future to prevent an accident like this from ever happening again.