Major Pivot: Bernie Sanders Has Become Staunchly Capitalist After Tasting Mountain Dew Code Red And Learning It Was Made By A Corporation 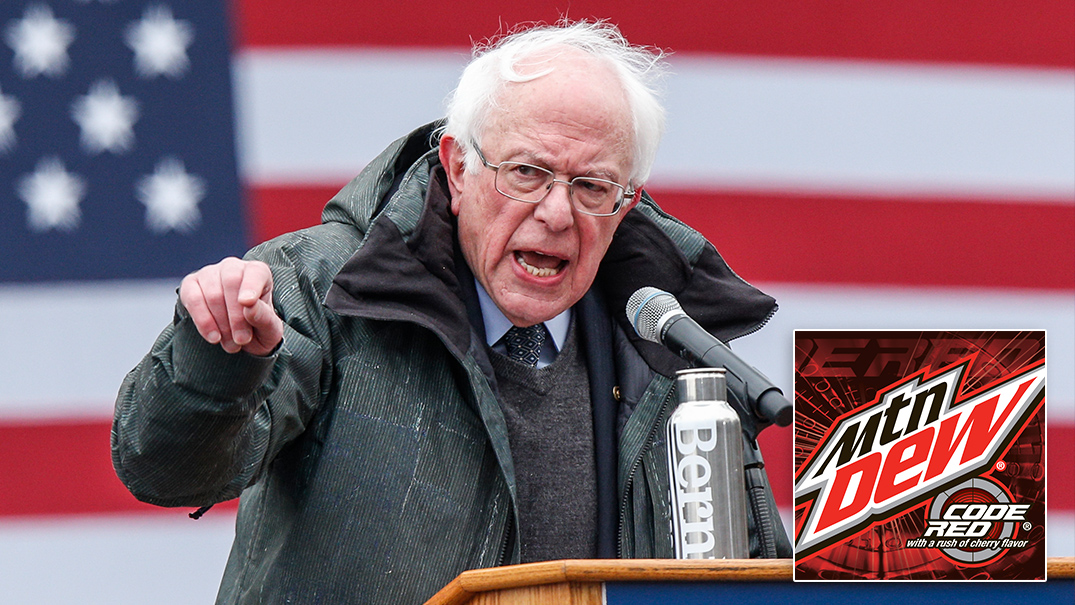 The presidential race just got shaken up! Democratic candidate Bernie Sanders announced he is now fervently capitalist after tasting Mountain Dew Code Red for the first time and learning it was made by a corporation.

Wow. This is a major pivot from Sanders’ former platform of wanting to increase taxes on wealthy companies, and it’s bound to have massive ramifications for the 2020 election!

Bernie Sanders was on a campaign stop at an Iowa diner when he quenched his thirst with a bottle of Mountain Dew Code Red. After the avowed socialist took one sip of the cherry-flavored soft drink, his eyes widened in amazement. People nearby heard Sanders yell, “This beverage is marvelous, absolutely marvelous! Fizzy, sweet, and the color is an appealing rosy hue. I want to meet the hard-working American chef who made this spectacular drink!” Staffers then informed Sanders that Code Red wasn’t made by an employee at the diner, but was instead manufactured by PepsiCo. After gasping in shock, the Vermont senator reportedly muttered, “I’ve been so foolish. All these years wasted trying to raise corporate tax rates. Corporations are wonderful. Corporations gave us the gift of Code Red.”

Sanders then gave an impromptu speech to supporters, explaining that an economic system of unchecked capitalism was essential to produce “the finest, reddest sodas in the world,” and that if he became president, he would do everything he could to realize that dream. He also warned that laws enacting worker protections like a higher minimum wage or paid time off would “only impede the geniuses of the soft drink industry, who need free reign to manufacture scarlet Mountain Dew without big government getting in the way.”

As of this morning, Sanders’ website has updated to reflect his new pro-corporation stance. The senator has also dropped his support of Medicare For All, long a cornerstone of his political program, with his site explaining that, “instead of expecting handouts, Americans who want healthcare should start a soda company and get money for their medical bills by selling a delightful red soft drink.”

This is definitely a big change for the former progressive candidate, and it will be interesting to see if Sanders can carry this new pro-capitalist ideology all the way to the White House. If anyone can convince voters that corporations deserve way more money so that America can maximize its production of Mountain Dew Code Red, it’s a grassroots hero like Bernie Sanders. Other Democratic candidates should definitely take note, because Bernie just changed the game!