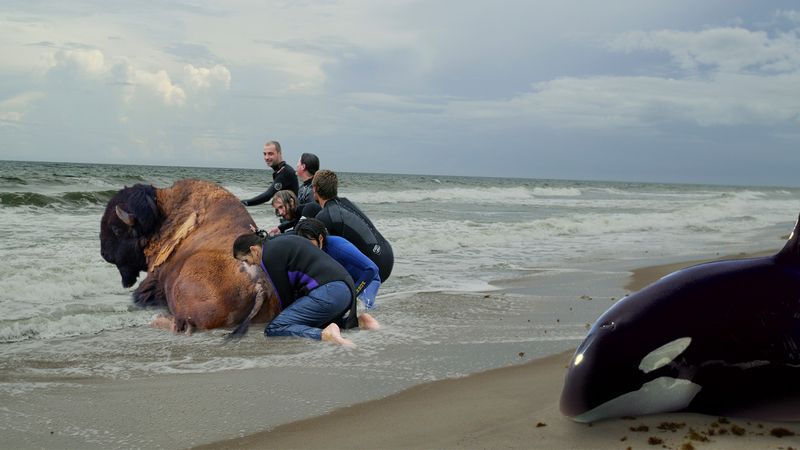 Here’s a story of quick-thinking heroism that will put a big smile on your face.

When a baby orca washed ashore on the beaches of Monterey, California, things looked bleak. With the distressed animal unable to return to the water, something had to be done. Thankfully, a group of courageous beachgoers were nearby, saw what had happened, and stepped up to the plate by offering the sea an equivalently sized bison.

After coming upon the whale in peril early Sunday morning, these heroes leapt into action. Realizing that time was of the essence, they quickly determined that the orca calf weighed about 300 pounds, then drove to a nearby bison farm, where they bought a bison of about roughly the same size. They then returned to the beach, dragged the bison into the ocean, and watched as the tides swept it out to sea, restoring balance to circumstances that once seemed hopeless.

Most people would have seen the beached orca and walked right on by, or perhaps tossed a small land mammal back into the water, but these selfless men and women made things right by giving the sea a full adult bison. When the crowd of concerned onlookers burst into applause as the bison disappeared beneath the waves, they knew it had all been worth it.

“We received a gift of the sea, so we had to give a gift of the land,” said 37-year-old Ben Davis, one of the kind bystanders who stepped up to salvage the dire situation. “Today we did only what was necessary to restore stability, compensating the ocean’s generosity in equal measure. All is right once more.”

Wow, if only there were more people like this, the world would be a much better place. Kudos on a job well done!