Miracle: Surgeons Have Saved A Baby Born With Its Arm Stuck In A Vending Machine 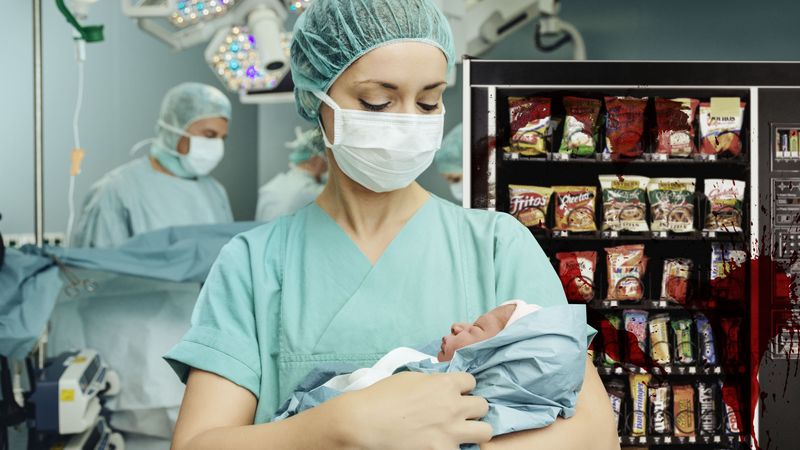 Get ready for the most heartwarming story you’ll read all day.

It’s every mother’s worst nightmare to be told that your newborn is in peril. That’s what happened to Allison Davies of Slingerlands, NY whose daughter Samantha was tragically born with her arm stuck in a vending machine. Thankfully, a group of heroic surgeons sprang to action and were able to free Samantha’s limb from the snack dispenser, saving her life.

Within moments of Samantha’s birth, doctors realized that they had to act fast, as the baby’s arm was located dangerously close to the selection of gum and mints on the machine’s bottom shelf. As with 90 percent of births where the baby has its arm caught in a vending machine, it does not show up on ultrasound at any point during the pregnancy, so doctors are unable to plan for it until the actual delivery date.

At first the medical team hoped that surgery could potentially be avoided, as nurses sedated both the child and mother and unplugged the vending machine before an attempt was made to carefully tilt the machine over onto its front legs and shake Samantha’s arm free, albeit to no avail. It was at this point they realized that more intrusive, riskier measures would be needed if they hoped to save the infant.

As the situation grew more dire, surgeons hurried to perform several incisions in order to remove the plexiglass plate before cauterizing the exposed area. It was then that they used a pair of surgical tongs to extract a dangling bag of Fritos, giving them unobstructed access to the arm and newfound hope that the operation would be a success. Utilizing a retractor to hold open the vending-machine flap, doctors were then able to create space between the baby’s limb and the machine, and after several grueling hours, these incredible men and women pulled Samantha’s arm free without harming the baby or the mother. Plus, the vending machine is still functional.

Other than a pack of Rolos getting smashed by the newborn’s elbow during the extraction, everything went flawlessly. What a picture-perfect ending!

“With the vending machine containing over 30 snack and drink products spread out across seven shelves, there were a lot of variables during Samantha’s surgery that could’ve caused further complications, all of which we luckily avoided,” said Darryl Harper, chief surgeon at Albany Memorial Hospital. “At first we estimated Samantha’s chances of survival at around 50 percent, but once an x-ray showed that the machine contained Xxtra Flamin’ Hot Cheetos, that number dropped to 20 percent. Thankfully the numbers were wrong, and we couldn’t be happier with how the surgery went.”

We couldn’t be happier either! Congrats to these incredible doctors on a job well done, and congrats to Allison as well on the birth of her healthy baby girl!