More Controversy: Donald Trump Reportedly Used Money From His Own Charity To Buy His Voice Back From An Ancient, Blind Hag 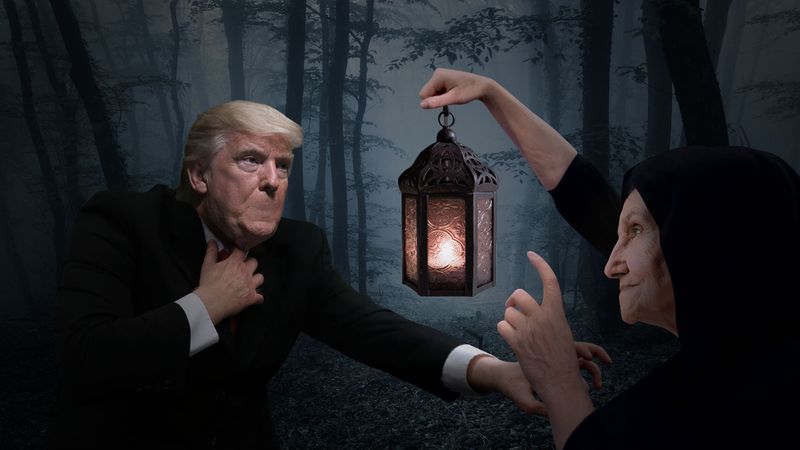 Well, the scandal swirling around Donald Trump’s charity just got kicked up a notch.

Recent investigations of the Donald J. Trump Foundation have uncovered a history of questionable spending, with the Republican presidential nominee repeatedly using funds to make personal purchases and settle lawsuits against his private businesses. But this latest allegation might really ruffle some feathers at the IRS: Donald Trump reportedly used money from his own charity to buy his voice back from an ancient, blind hag.

Wow. Just wow. Let’s see how Trump tries to justify this one.

The transaction allegedly took place in 2004, while Trump was on a land-speculating trip in western Albania. An anonymous insider claims that after an extravagant evening of dancing, drinking, and merriment, Trump found himself in the woods, where a sightless, haggard old woman stood waiting for him. She reportedly brandished an empty leather sack from her robes and asked if he had any coins to spare. When Trump spurned her, the hag took her revenge.

“There was a flash and a crack of thunder, and he grabbed his throat in agony,” recalls the former Trump Foundation accountant, who now hopes to expose the business tycoon’s flagrant self-interested dealings. “Donald tried to speak, but his mouth had disappeared entirely. And the blind hag’s leather pouch was suddenly filled with some sort of writhing force, desperately trying to escape.”

The insider goes on to describe how the old woman then began to chant in verse, warning Trump that he would only be able speak again once he was able to truly hear the voices of the poor, or if he paid her $25,000. Trump then momentarily stopped clawing at the patch of smooth skin where his mouth had been to pay off the enchantress using money from his charity that had been allocated for improving veteran hospitals. The mysterious hag then begrudgingly handed him the squirming leather sack before hobbling off into the night.

Yikes. This does not look good for The Donald.

There’s no comment yet from the Trump campaign—which the former foundation staffer noted is likely due to the fact that the only lingering effect of Trump’s curse is his inability to ever speak of it, a frigid easterly wind gusting in from nowhere whenever he begins to put words to the experience. Still, America should think long and hard before electing a president who would take money from charity and use it to reverse a personal hex. If he’s using his own foundation to pay off a mystical crone, just imagine what he’ll do with the federal budget.