Please, PLEASE Tell Us This Is Satire: A Website Called ‘The Onion’ Just Posted An Article Claiming That Girlfriend’s Hair Somehow Inside Wallet 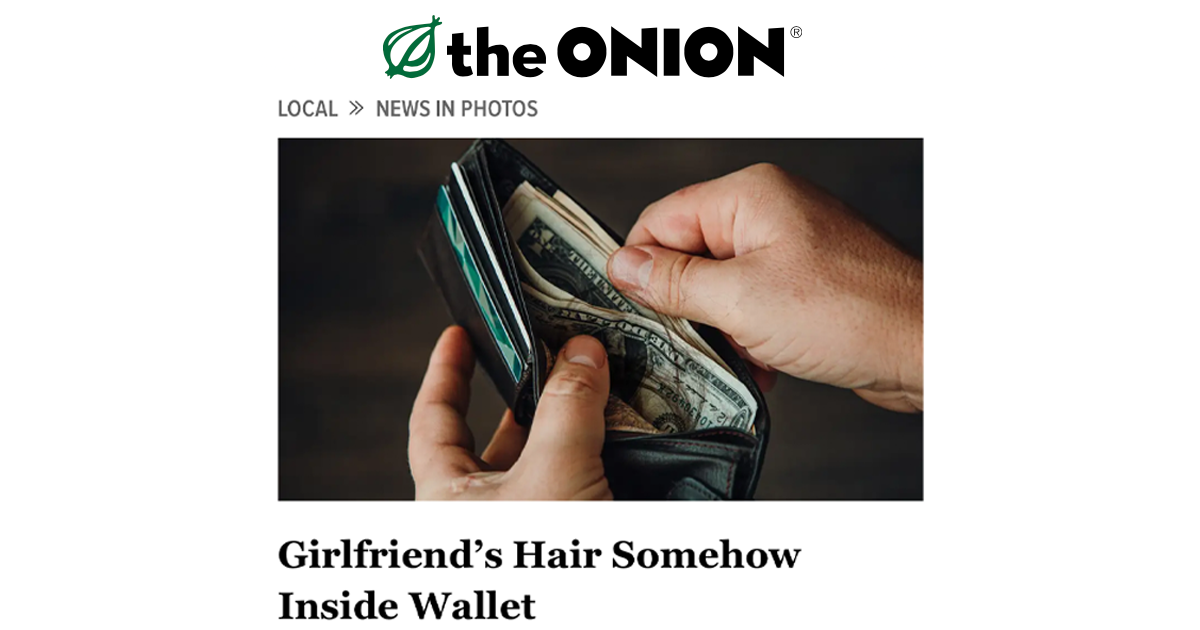 These days, real life often proves to be even more bizarre than anything the writers at ‘SNL’ could ever dream up, which means it’s becoming harder and harder to distinguish fact from fiction. So it’s safe to say we’re a little bit confused right now, but we’re really, REALLY hoping that this article published by a website called ‘The Onion,’ which claims that girlfriend’s hair somehow inside wallet, is satire.

Whaaaaaaat?! PLEASE tell us this story is a joke, because if not, we can’t even.

The insane article doesn’t really contain any red flags screaming “THIS IS SATIRE,” but it’s just too fucking weird and crazy to be real, right? RIGHT?! It includes a ridiculous but authentic-seeming photo of a woman’s long hairs inside a man’s wallet, which definitely suggests that the situation described in the headline could be 100% true—but come on, that’s gotta be Photoshopped! Please tell us it’s  Photoshopped, because if not, this is just about the most fucked thing we’ve ever seen.

Could it really be true that girlfriend’s hair is somehow inside wallet? We sort of think not, but also, it could be!

We don’t have many more clues as to whether the story is real or satire as there’s no accompanying text — it’s simply a headline and a supporting photo. Snopes is no help on this one (trust us, we checked) and the article has thousands of shares across every major social media platform, meaning that satire or not, this ‘The Onion’ has a massive reach. Of course, we were able to ascertain that this particular article might be a comedic spoof, but you have to wonder how many of The Onion’s many followers don’t have as keen of an eye for spotting satire in their feeds as we do. If this is indeed a send-up rather than a real news story, there may well be thousands, or even hundreds of thousands of people out there who fell for it hook, line, and sinker.

If this shit is real it’s almost like we’re living in an episode of ‘South Park’ or something.

In these crazy times we’re living in, girlfriend’s hair somehow being inside wallet is all-too-plausible, but you’ve really gotta hope that this ‘Onion’ is some kind of brilliant satire site. If it’s not, and the article is a real one, all we can do is shake our heads. What a wild era we live in!