Powerful: Pringles Has Unveiled A Line Of Damp Chips That Won’t Crunch Loud Enough To Ruin A Moment Of Silence For Our Fallen Soldiers 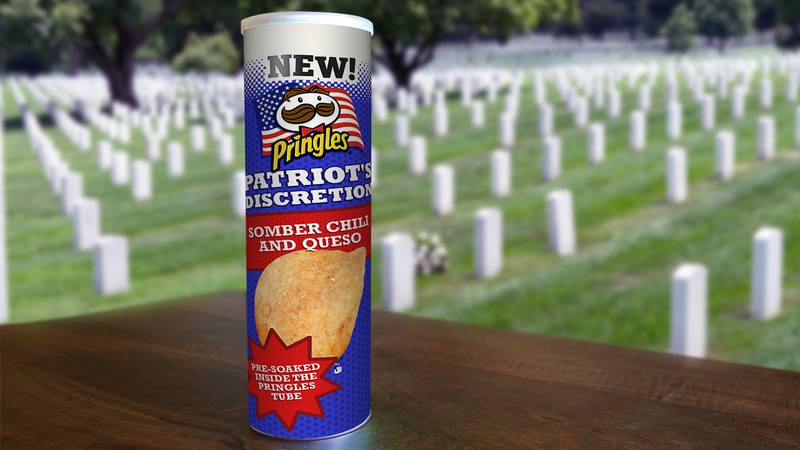 If you’re looking for a company that really cares about the troops, look no further than Pringles.

Few people deserve more respect and adoration than the heroes who willingly sacrifice their lives to protect America’s freedom, and no one knows that better than Pringles, which is stepping up for the troops in a big way: The snack-manufacturing powerhouse just introduced a new line of damp chips that won’t crunch loud enough to ruin a moment of silence for our fallen soldiers.

Wow. What a powerful way to help customers show respect for the troops!

According to Pringles executives, the new line of chips will come in the same essential flavors customers have come to love, but will be presoaked inside the Pringles tube, making the chips just damp enough to replace any crunching sounds that would disrupt a somber rendition of “Taps” with a gentle, muffled sloshing. Through extensive testing, these mushier chips have been shown to be so quiet that, when eaten, it is virtually impossible to make enough noise to ruin a moment of silence for a fallen soldier.

With the new product, which they’re calling Patriot’s Discretion Pringles, customers will now be able to pull out a few wet chips, place the damp snack onto their tongues or pack it into their cheeks, and let their favorite flavors melt into their mouths, all without the fear of bringing a hero’s memorial to a screeching halt with a single, booming bite.

“Everyone wishes they could be eating chips when they’re at a service commemorating a fallen solider, but up until now, it’s just been way too loud,” said Pringles CEO Michael A. Powell at an event unrolling their newest product. “Before, the best you could do was settle for something quiet like mints or gum, but those bland, flavorless days of quiet respect are now a thing of the past.”

“We at Pringles know how important it is to remember those who have sacrificed their lives to protect the American way,” he added. “And now, with our line of damp Patriot’s Discretion Pringles, there is finally a way to do it without sacrificing your hunger.”

Amazing. It looks like Pringles is a company that isn’t about to let customers ruin a moment of silence, but isn’t about to let them go hungry either. Whether you’re at a veteran’s funeral, halftime at a local high school football game, or even the Tomb of the Unknown Soldier, the days of having to choose between tossing back a couple Pringles or paying tribute to a fallen service member seem to be over. Here’s to hoping more companies begin showing the same commitment to our troops that Pringles does!