Probably Bullshit But Still A Little Scary: Ethan Is Claiming That His Super Soaker Is Filled With Pee 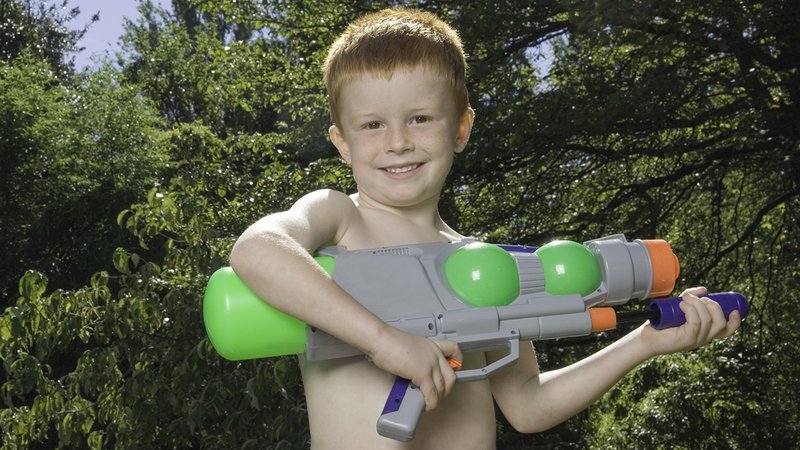 Tensions are rising over in Brian’s backyard, and you better believe that it’s all thanks to the king of big talk himself, Ethan Hutchinson. Ethan just started blasting everyone with a Super Soaker and is claiming that it’s filled with piss, even though it’s probably not—but still, it’s impossible to be 100 percent sure.

Everyone knows Ethan is full of shit, but at the same time, he’s kind of nuts, so it’s tough to put something like this past him.

It was all smooth sailing over at Brian’s until around 5 o’clock, when Ethan got home from wrestling practice and walked the half block to Brian’s with Super Soaker in hand, making a beeline to the trampoline everyone was hanging out on. This maestro of bullshit wasted no time in spraying everyone with the water gun, laughing the whole time and snorting out how everyone should be so skeeved because they just got shot with his pee. Logan was the first one to tell him he’s a goddamn liar, but Ethan quickly rebutted with a bogus story about how wrestlers need to drink a ton of water so he pees in his Super Soaker sometimes, which is such a bad lie but also sounds like it could kind of makes sense, so it’s hard to know.

There’s definitely no way he actually peed in a water gun and just started shooting it at his friends for no reason, but it’s still kind of scary when you hear something like this coming from Ethan. And even if he didn’t fill up the entire Super Soaker reservoir with pee, he may have filled it most of the way with water and then just a little pee, which is still wicked gross.

According to sources, even after Jess told Ethan straight up that this piss lie was worse than the one he told about his dad being the guy who was in the Barney suit, no one was able to put the idea that it’s actually his pee totally out of their mind. Sure, the kid is definitely a liar, but he also threw a snowball with a rock in it at Michael Siger last winter and gave him like, 12 stitches, so who knows what else he’s capable of? Plus, Ethan’s been known to have these meltdowns in school where he gets so mad that he just leaves the classroom, and sometimes he’ll even kick a desk on his way out, so the kid’s definitely got some stuff going on.

Damn. Everything’s most likely fine with the whole Super Soaker-pee thing, but it still sucks that Ethan’s got to put something like that in everybody’s head. And everyone was having a pretty chill hang on that trampoline, too. Fucking Ethan.