Really Wish We Could Talk: One Of The People On This Silent Retreat Is The Ohio State Buckeyes Mascot 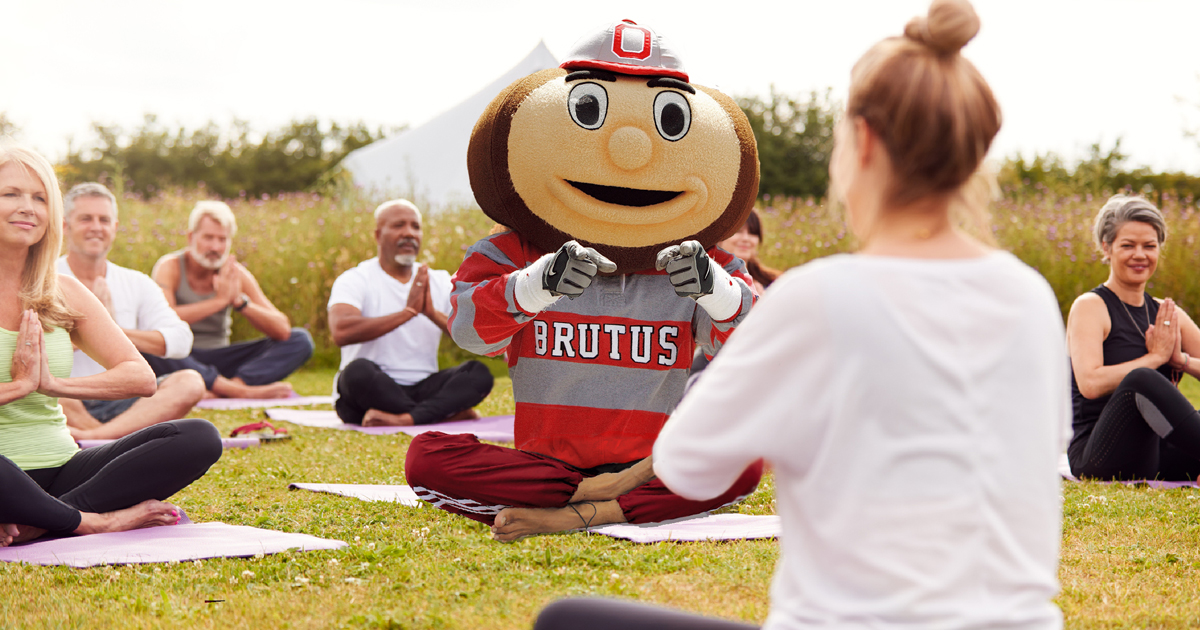 A couple of weeks ago, going on a silent meditation retreat seemed like the perfect way to practice a little self-care and take some time for yourself. Unfortunately, it’s instead proving to be just about the worst time to abstain from speaking: one of the people on this silent retreat is the Ohio State Buckeyes mascot.

God, wish they’d explain why he’s here. Very frustrating that you’re not allowed to talk or ask questions re: what the deal is.

From the moment you walked out to the lotus garden for the first meditation session and saw the mascot sitting in the grass cross-legged with his massive three-foot-wide head, you knew staying silent was gonna be a challenge. There are so many things you want to ask the Buckeye: Is he attending the silent retreat as the mascot? Or is he attending the silent retreat as the guy inside the costume? And if the latter, is he contractually obligated to wear the costume 24/7 or something? Really wish someone would address this!

God, this is just the worst timing ever. The whole point of this retreat is so you can be mere observers of your passing thoughts as you attempt to uncover your subconscious, but literally all you can think about is the fact that you’re five feet away from Brutus Buckeye.

The only person who’s allowed to talk on this retreat is the shaman who’s leading the yoga and meditation exercises, but so far he has completely neglected to acknowledge that one of the people in the group is a huge, unblinking, anthropomorphic nut. The shaman has just been addressing him like a normal guy, making yoga adjustments on him as though there’s nothing unusual about repositioning a thick felt leg into a better downward dog.

What’s really frustrating about the situation is that you had to hand in your phone upon arrival at the retreat, so you can’t even google the Ohio State mascot to try to find out the identity of the person inside the suit, or text any of your friends about how wild this is. And to make matters worse, everyone else on the retreat is taking it all super seriously and won’t make eye contact with you when you’re trying to look at them like, “Hey, isn’t this crazy?”—even though they’re almost certainly just as curious about it as you are.

Honestly, the organizers of the retreat really shouldn’t let things like this happen. How the hell are you supposed to reset your mind when your main thought is how badly you want to blurt out, “Yo, it’s straight up crazy that there’s a mascot here”?

You’ve got two more days to go on this retreat, which is seriously going to be a test of your patience. You’re not supposed to talk in the parking lot on the way out, either, but there’s no way in hell you’re letting the mascot leave without at least asking him what the deal is. It is absolutely crucial that you get to the bottom of this!