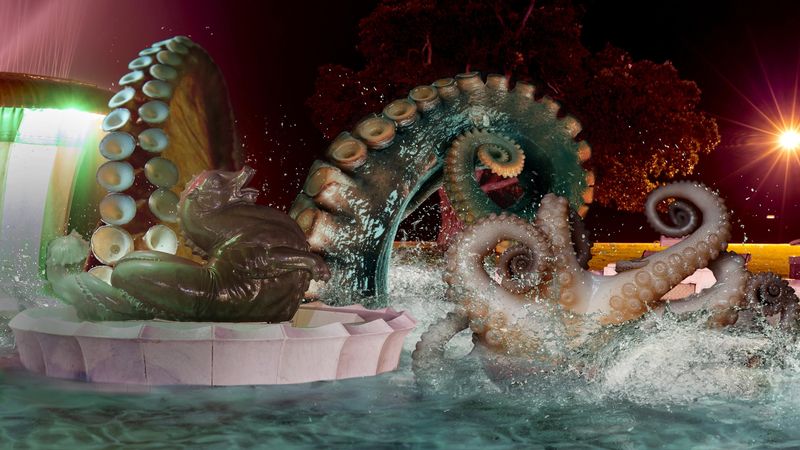 We’re still waiting for the full story from H.P. Lovecraft’s weekend bash—every celeb contacted so far seems to be dealing with some serious hangover effects. For now, peep these pages from an unidentified L.A. reporter’s ragged and barely legible notebook, found in a storm drain late Sunday morning, apparently abandoned in haste. Check it out!

It is only with vast trepidation that I dare recount what follows, or disclose the heretofore unseen pics that have so scarred my soul. The gossip contained herein, which I hesitate to relate, would perhaps best remain concealed from the world, containing as it does such juicy and monstrous deets as man is woefully unfit to comprehend.

Never would I have invaded these forbidden spheres of dream had not H.P. written me in the forenoon, by direct message, imploring me in none but the most forceful and urgent language to attend the party he had planned for that very eve, the off-the-chain and extraordinary craziness of which, my acquaintance insisted, would prove “of incalculable import” to L.A. and, indeed, to the blogosphere at large.

The house itself demands an attempt at description. Totally concealed behind a dense and dark rampart of evergreen firs (uncharacteristic of this region), Lovecraft’s mansion obeys an architectural geometry so complex and fearsomely inscrutable as would have mystified an Euclid, let alone one of the innumerable bikini-clad babes I found roving, as if permanently lost, within its labyrinthine walls.

There, betwixt mighty columns of ante-Druidical origin, I discovered an environment of base drunkenness and hideous frivolity, an undulating mass of celebs, Old Ones, studio bigwigs, and still viler beings whom I dare not consider, stretching indefinitely in all directions. The pulsing flash of the strobe shewed among them several of the Kardashian lineage as well as the Seventh Baron Exham, Macaulay Culkin (though he was uncannily advanced in years), Dr. Dre, and sundry other scientific men.

Yet all the while, the dance floor was silent, save for a distant and vaguely musical piping howl, the harrowing effect of which on my soul was indescribable. And here I will admit my account ceases to accord with reason, for the event has so frayed my nerves that its particular memories I can only now rationalize as mirage or illusion. For I…yes, I am certain: I seemed to spy Kesha in the throngs, and I insist that, in the moment, her fabulousness was quite literally blinding. And, get this, you who cling to vain rationality: Her arms were draped around not only the malign deity Nyarlathotep but international pop god HARRY STYLES (!!!)

Things grew ever wilder, ever more incomprehensibly horrid as the night progressed:

The impression the scene generated in my consciousness is so enduring and frightful that it shakes me to recall it now. And lest I burden you with offensively irrelevant and dangerous speculation, I shall leave unsaid what else transpired that night in H.P.’s baroque, Cyclopean abode, and simply say that it was off the chain, indeed, off any chain conceivable to the foremost minds of our time.

Sounds like H.P. did it up! Keep checking back for more pics and deets.