Shameful Bullying: Cruel Kids At School Are Laughing At This Boy Just Because His Name Is Boner Von Rimjob And His Pants Fell Down During His Solo Tuba Recital 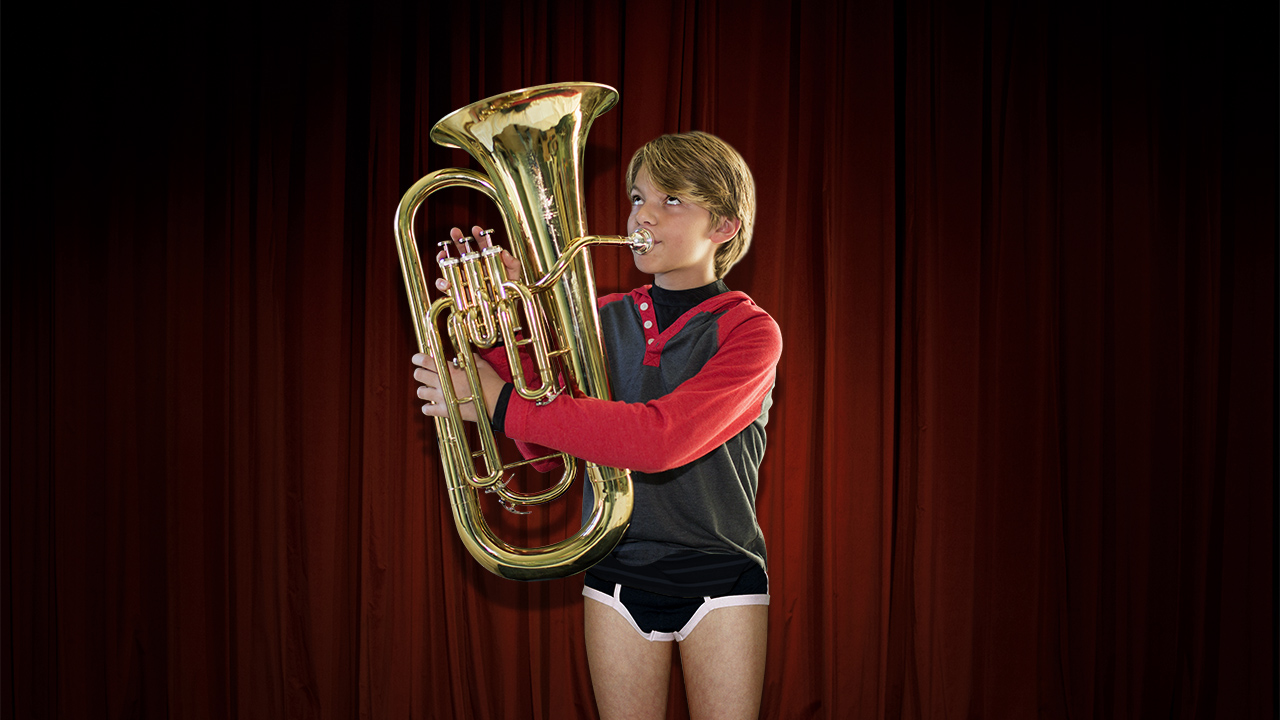 Get ready to be outraged, because here’s a story that shows just how terrible bullying among today’s youth can be: Cruel kids at this boy’s school have been making fun of him just because his name is Boner Von Rimjob and his pants fell down during his solo tuba recital.

This morning, 12-year-old Boner Von Rimjob woke up incredibly excited to delight hundreds of his peers at a school-wide talent show, where he was set to honk out a selection of his favorite sitcom themes and Christian hymns on his humongous tuba. Sadly, however, his performance wasn’t as well-received as he’d hoped, as his classmates started laughing at him pretty much as soon as he began playing and only laughed harder when, halfway through his rendition of “Jesus Loves The Little Children,” his pants fell down around his ankles, which he failed to realize for nearly five whole minutes on account of being so deeply absorbed in his music. Even after tooting out an impassioned interpretation of “Our God Is An Awesome God” to end his set—something he thought for sure would wow the crowd—the kids kept laughing and jeering at Boner, paying no mind as he pleaded with them to “Stop laughing at my happy underpants!” in a high-pitched shriek.

Unfortunately, the scene became even more devastating when Boner dedicated his performance to his secret crush, an 86-year-old school lunch lady named Grimace McDonalds, causing his classmates to laugh so hysterically that the floor shook. Trying his best to ignore them, Boner blew the lunch lady kisses and serenaded her by playing “I Love You, You Love Me” on his tuba, but, heartbreakingly, Grimace McDonalds just joined the chorus of jeering children and laughed right in Boner’s face.

“It’s simply unacceptable the way that these children laughed at my poor little Boner,” said Boner’s mother, Queef Von Rimjob, who had the misfortune of watching her son get bullied in person after showing up at the performance to cheer him on with a huge homemade banner reading “MOMMY LOVES HER SPECIAL BONER.” “Nobody should laugh at my Boner. My sweet Boner is still growing and needs all the support he can get! His pants fall down all the time, so I don’t see why it’s such a big deal. These children should be ashamed of themselves! We’ll see if they’re still laughing when I tell my husband, Bathtub Von Rimjob—the esteemed junior dildo critic at Diarrhea Magazine—about their despicable behavior!”

Queef Von Rimjob then called her husband and told him what happened, prompting Bathtub Von Rimjob to leave his job at Diarrhea Magazine early and drive straight to the school in the refurbished ice cream truck he uses as a car. Though Bathtub scolded Boner’s classmates for making fun of his son, it did not stop the students from laughing, leaving him no choice but to lift his shrieking, pantsless son over his shoulder and carry him away. Making matters worse, Bathtub’s pants fell down as he was carrying his son outside, causing him to trip, and both Bathtub and Boner fell to the ground and farted at the same time, inciting even more laughter from Boner’s mean-spirited peers.

Apparently, no one ever taught these heartless kids that bullying is never okay, especially when the person you’re mocking is trying to entertain you by playing his favorite worship music on his humongous tuba while wearing his colorful parachute pants. If this is the way that today’s children are treating each other, then the future of humanity is in a sorry state indeed!