Still Human: 5 Times Nelson Mandela Got Stuck On The Roof Of A Pizza Hut 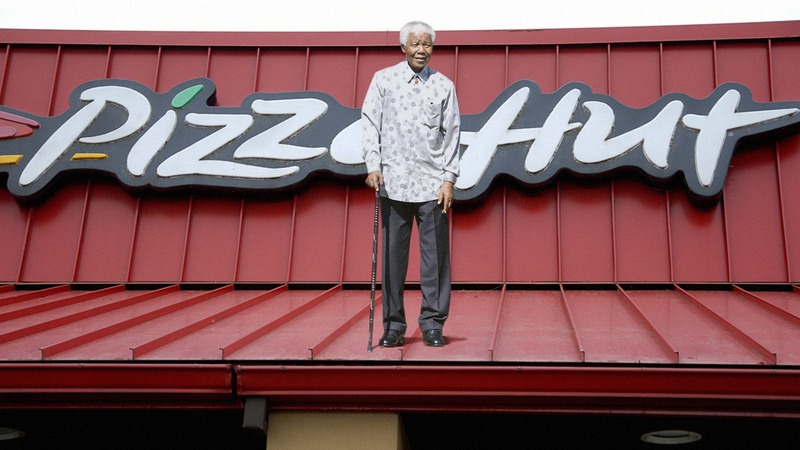 Nelson Mandela will always be remembered as a champion for human rights and a political hero who helped end apartheid in South Africa. But people are complicated, and he didn’t live his life without a few mistakes. Here are the five times Nelson Mandela got stuck on the roof of a Pizza Hut.

1. The time Nelson Mandela wound up on the roof of a Pizza Hut while trying to find the bathroom: In October of 1996, Nelson Mandela walked into a Pizza Hut and asked the young employee behind the counter where the bathroom was. Before the employee could answer, Mandela said, “Actually, don’t tell me. I already know where every bathroom is because I am the president.” Mandela then walked straight into the kitchen of the Pizza Hut and disappeared. Later, when the cashier went out to the parking lot to smoke a cigarette, he looked up to see Nelson Mandela on the roof of the Pizza Hut quietly looking back down at him. They had to call the fire department to carry Nelson Mandela off of the roof and take him home. Mandela had been too arrogant, and he thought that just because he was the president of South Africa, he could find any Pizza Hut bathroom without directions. Instead, he got lost and wound up stuck on the roof. Still, this is understandable. At the end of the day, even the best of us get cocky and make mistakes.

2. When Mandela got lost and climbed onto a Pizza Hut roof to get a better view of the road: In June of 1994, shortly after being elected president of South Africa, Nelson Mandela was on the way to an important address before high-ranking members of government at the Houses of Parliament when he got lost in Cape Town. Mandela quickly located the nearest Pizza Hut, which was three hours out of his way, and climbed on top of the roof so that he could, as he explained later, “see the whole world from up there.” Even though there were taller buildings in the area, Mandela chose to stand on top of the Pizza Hut because “it smelled like Italy in there.” Sadly, the legendary political hero was unable to see the Houses of Parliament from the relatively low elevation of the Pizza Hut roof, and to make matters worse, the door to the roof locked behind him and he had no way to get down. Hours later, someone working in a taller building looked down and saw the South African president asleep on the roof of the Pizza Hut. The fire department carried him down, but by that time he had already missed his speech. It just goes to show that Mandela was a great man, but he wasn’t a perfect one.

3. The time Mandela went to return 104 empty pizza boxes for Pizza Hut to reuse: One morning in the August of 1995, a Pizza Hut employee opened the restaurant door to find President Nelson Mandela standing in the parking lot next to a truck filled with 104 empty pizza boxes from many different restaurants. Mandela explained that he thought Pizza Hut could use the boxes to “hide your pizza or your jewelry or whatever,” and although the employee had no use for the dirty boxes, he didn’t want to say no to the beloved leader of South Africa. Mandela pulled a ladder out of the back of the truck and began bringing the boxes up to the roof one at a time because he knew they would be “safe from thieves” up there. The employee returned at 10 p.m. to find Mandela’s truck still running, the ladder tipped over, and Mandela on the roof, having brought up only two pizza boxes. The fire department had to come and get Mandela down and it was a big hassle, but Nelson just wanted to be helpful! Nelson Mandela spent his life acting with compassion and courage. Sometimes that compassion and courage helped bring an end to apartheid, and other times it left him stuck on the roof of a Pizza Hut.

4. When Mandela climbed onto the Pizza Hut roof because he heard the overhead music in the Pizza Hut and thought U2 was playing a concert up there: In February of 2006, Nelson Mandela was buying a bag of dry salad croutons from a Pizza Hut in Cape Town when the song “Smells Like Teen Spirit” by Nirvana began playing on the restaurant’s overhead speakers. “I know who that is. That’s my friend Bono from U2. I will climb on the roof and say hello to him.” When the Pizza Hut cashier said, “Actually, Mr. Mandela, that’s not U2. That’s ‘Smells Like Teen Spirit,’” Mandela responded, “I will ask my friend Bono if he has any gum for me to swallow. I can swallow gum because I used to be the president and they let you do that.” Mandela climbed up onto the roof looking for U2 to thank them for playing such beautiful music and to ask Bono for gum to swallow. When the inspiring anti-apartheid activist got to the roof and saw that U2 was not there, he began to cry because he thought that they must have been eaten by a bird. This is all a roundabout way of saying that Mandela’s sacrifices as a political prisoner will forever make him a hero, but he also made some boneheaded mistakes.

5. The time Mandela grabbed a balloon that carried him up to the roof of a Pizza Hut: On an April afternoon in 2010, Nelson Mandela was standing in a park, saw a small party balloon floating by, and made the mistake of grabbing it. The balloon immediately swept Mandela up into the sky and carried him a few miles before popping right above a Pizza Hut. He was stuck on the roof for three days before anyone found him. Many people say that Mandela should have known better than to go around grabbing strange balloons, but it’s important to remember that in spite of all his courage and heroism, Nelson Mandela was still an impulsive man who loved balloons of all kinds. There were times in history when Nelson Mandela seemed like a god, but the truth is that he was just a man, and he was prone to errors in judgment just like the rest of us.