Taking His Sweet-Ass Time: 6 Christmases Santa Lingered A Little Too Long After Leaving Presents Under My Tree 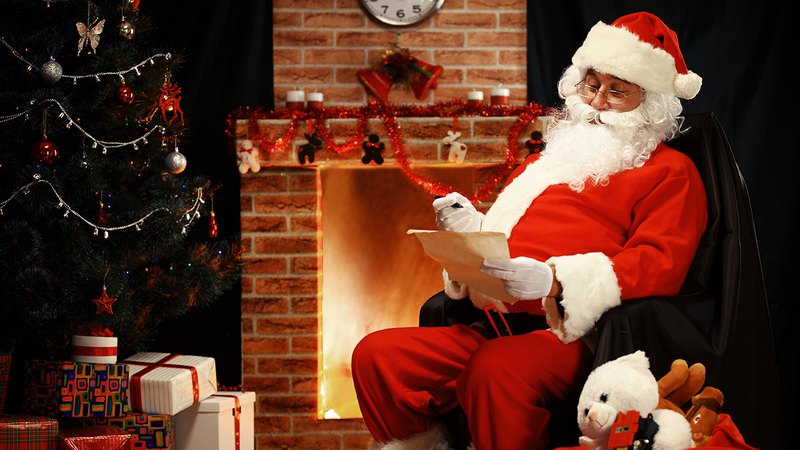 I’ve seen Santa Claus six times, and every single time he’s taken forever to get the hell out of my house.

1. The Christmas he made me open the PlayStation 3 he brought me so he could play it: 2007 was the first time I saw Santa. He said I could open one present and handed me a box. It was a PS3, which he immediately took from me and hooked up to my TV. He then proceeded to sit there and play Tiger Woods PGA Tour 07 forever. I didn’t even ask for that game. Every time I had the controller he’d take it from me and say, “Here, let me show you how to play.” I kept trying to go back to bed, but he kept saying, “Wait, you’ve gotta watch this. Watch this.” Santa finally left when my dad yelled at me to go back to bed.

2. The Christmas he took a shower without asking and blow-dried his hair and everything: On Christmas Eve 2008, Santa woke me up and asked if he could use the bathroom. As soon as the bathroom door closed, I heard the shower begin to run, and after a lengthy shower, I heard the sound of my mom’s blow dryer for quite a while, followed by an electric toothbrush. I knocked on the door to tell him I had to get back to bed, but he said he wanted to snake the tub drain because it was a little slow. He was in there for another hour, and he didn’t even get the tub fixed. This was the second time Santa Claus overstayed his welcome at my house, but it wasn’t the last.

3. The Christmas he told me the entire goddamn history of reindeer: In 2009, Santa somehow turned our five seconds of chitchat into an excuse to drop his reindeer knowledge, immediately becoming a living Wikipedia entry for reindeer. “You know, reindeer and caribou are the same animal.” “Both male and female reindeer grow antlers, unlike most deer…” I kept thinking there couldn’t possibly be anything else someone could know about reindeer, but then he’d bust out another reindeer fact. I just kept nodding along hoping he would take a hint, but the guy just kept going on and on. I have no idea when he left because I fell asleep at some point during his three-hour reindeer lecture, but when I woke up he was gone.

4. The Christmas he asked if he could charge his iPad even though it was at 78 percent: In 2010, Santa wanted to charge his iPad, and when he plugged it in, I saw that it was already at 78 percent battery life. To make matters worse, for some reason he was using an iPhone charger instead of an actual iPad charger, so it took forever. Then when it finally hit 100 percent, he asked if he could download some updates on my wifi. I have no idea why he didn’t just do that while he was charging it, but I couldn’t really say no because he’d just brought me a new pair of Air Jordans. Also he had the keyboard clicking sound on the whole time with the volume on full blast. It was insane. It should have been pretty obvious I needed to get back to bed. I was 9 and it was 3:45 a.m. I thought he’d never leave.

5. The Christmas he turned on the TV and fell asleep in my dad’s chair: By 2011, Santa was starting to get awfully comfortable in my house. This time he didn’t even ask before he turned on Fox News really loud and laid back in my dad’s recliner. I kept dropping hints like, “Don’t you have a lot of other houses to get to?” but he kept saying, “Yeah, I’ll be heading out soon,” and then nodding off. This time I just went upstairs and went back to bed while Santa was still there. When he was gone in the morning, I assumed he had left, but then that night I heard a noise coming from down in the basement guest room, so I went down there and found him conked out on the futon, snoring really loudly. When I woke him up, he said he hoped it was cool that he crashed down there, he was just super exhausted and really needed to sleep. I told him it was fine, but that he should probably be going. He said, “For sure, for sure,” and then he asked me if we had coffee. I told him we did, and he said, “Awesome,” and then just kind of looked at me. So I made him coffee while he watched some pasta maker infomercial, and he left like half an hour after that. I think all in all he had been in my house for about 24 hours that time.

6. The Christmas he seemed to admit that he had cheated on Mrs. Claus, had a three-hour breakdown, and finally left without giving me any presents: In 2012, Santa started saying all sorts of cryptic things that I took to mean he had cheated on Mrs. Claus, such as, “You ever do something so bad that you’d do anything to take it back? I mean anything,” and, “Do you think telling someone the truth is the right thing to do even when you know it will destroy them?” He then broke down and cried, and all I knew to do to console him as an 11-year-old was to sit in his lap and tell him what presents I wanted. Santa eventually stood up, beard soggy from tears, and shot up the chimney in a flash. He didn’t leave any presents that year. That was the year I finally had my dad seal off the chimney, and Santa didn’t come around anymore after that.