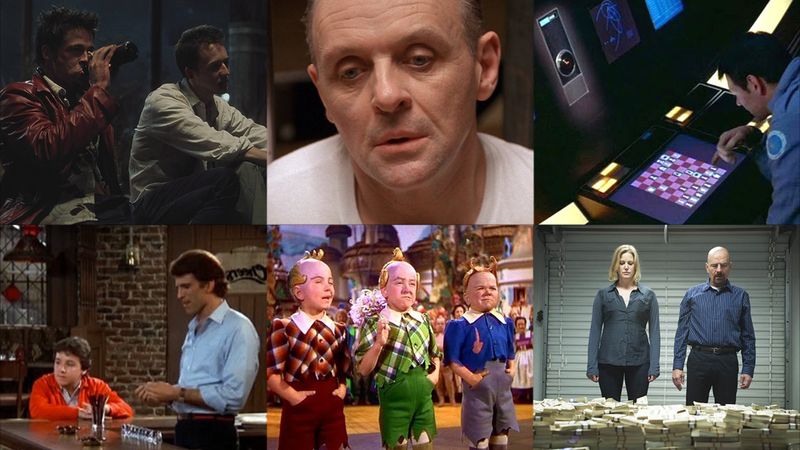 You might not have caught them before, but some of the greatest TV shows and movies of all time have absolutely crazy secrets hidden in plain sight. Check out this list for a rundown of the most mind-blowing Easter eggs ever!

2. Kubrick’s infamous nipple in 2001: A Space Odyssey: While Hal 9000 appears to be a glowing red dot in a camera lens, die-hard cinephiles know that it’s actually just a close-up of director Stanley Kubrick’s shirtless chest.

3. Alfred Hitchcock sitting on every toilet that appears in his films: Blink and you’ll miss it, but every time a toilet appears in an Alfred Hitchcock film, you can see the famous director sneakily sitting on it as if it’s no big deal. During the famous shower scene in Psycho, Hitchcock can be seen sitting on the toilet, smiling and waving directly at the camera as the film’s protagonist, Marion Crane, is murdered by a knife-wielding maniac.

5. Anthony Hopkins in Silence Of The Lambs: The Oscar-winning actor briefly appears for a few quick scenes in this 1991 thriller.

6. The emaciated horse standing behind Walter White in every shot of Breaking Bad: Although it might be tough to spot at first, fans who look closely at each shot of Breaking Bad will notice that throughout the entire series, a limping, taut-skinned horse follows Walter White at all times and urinates on the ground every time he tells a lie. Once you see the starving horse, you’ll never be able to unsee it!

7. The regular-sized Munchkin in The Wizard Of Oz: If you look carefully, you’ll notice a Munchkin who stands 5’ 9” in the background during the Lollipop Guild song. Pretty sneaky!

8. Hidden Chewbacca in Planet Earth: It’s easy to be distracted by the stunning visuals of this 2006 nature documentary series, but next time you start episode seven, keep your eyes peeled for the lionesses who are taking turns breastfeeding Chewbacca and raising him as one of their own cubs.

9. Stephen King’s legs getting broken in Misery: If you look closely, you’ll notice that the legs being violently trashed by Kathy Bates actually belong to the author who’s book inspired the movie.

10. Ty Cobb’s taxidermied corpse on display behind the pool table in Cheers: It might be hard to spot, but any avid Cheers fan will be able to find the stuffed and perfectly preserved corpse of legendary baseball star Ty Cobb. The only time Cobb’s presence is ever acknowledged is in the series finale, when Sam leans in close to his mummified body and whispers, “Please come back to life so that I can kill you again.”