The 7 Most Grueling Challenges Of Navy SEAL Hell Week 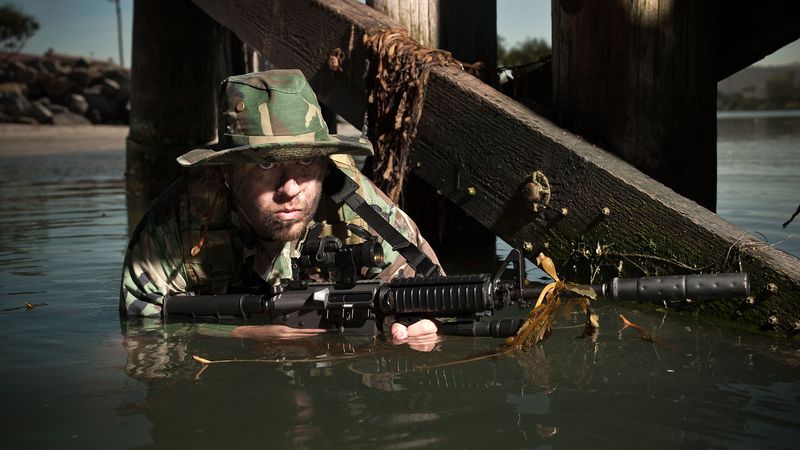 It’s no surprise that Navy SEAL training is intense, but you never imagined it could be this tough. During the five and a half days of Hell Week, new recruits must pass these merciless challenges to stay in the SEAL training program. And it more than earns its name: Only three out of 10 make it through to the end. Here are the seven most brutal trials of the bunch.

1. Not being scared of guns: SEAL operatives often have to use guns in the field, so it’s imperative that trainees not be terrified of firearms. On the first day of Hell Week, an instructor shows recruits a photo of a gun to test if it causes them to scream or faint, and if they do, they’ll have to pack their bags immediately.

2. Sleep near a man who plays the tambourine very well for three straight nights: Sleep deprivation starts to take its toll due to the man and his incredibly catchy tambourine solos. In order to get any rest, recruits have to resist tapping their toes to the percussionist’s beautiful drumming and jingling.

3. Walk through a swamp until they get bored: Recruits must endure wading through neck-deep, freezing-cold mud until they decide they would rather do something else. During real missions, it’s very important for SEALs to stop doing useless, boring things, so this challenge tests the recruit’s crucial ability to get bored. Candidates who never get bored and spend all of Hell Week in the swamp are disqualified from the program.

4. Identify the American flag: Halfway through the week, recruits are brought into the U.S. Navy Flag Chamber, where flags of every country in the world are arranged in a large circle. Without any hints from their instructors, recruits must point to which flag is the U.S. flag.

5. Carry an inflatable raft with the Joint Chiefs of Staff riding inside: In addition to their combined weight of over 1,400 pounds, this seven-person panel of America’s top military leaders are also notorious for doing little kicks while aloft in the inflatable raft, making this task truly grueling for any recruit.

6. Resist the Air Force’s gauntlet of temptations: The Navy and the Air Force have a longstanding rivalry, and the Air Force always tries to steal the Navy’s most promising sailors. It is customary for the Air Force to bring three bribes to lure SEAL recruits away: gold coins, a scarf that still smells like the woman who wore it, and a rare orchid. Should trainees accept any of these bribes, they are dishonorably expelled from the Navy and become five-star generals in the Air Force.

7. Find and kill a bird that made Osama bin Laden smile at some point in his life: Often considered the most difficult part of the week, recruits must first track down a bird whose bright feathers or pleasant call gave Osama bin Laden a little bit of joy when he was alive. Then, they must bring the bird to a commanding officer, along with proof that the former al-Qaeda leader saw it at least once, before killing the specimen in a manner of their choice. This challenge becomes more difficult with each recruit class as more birds that bin Laden saw are killed off, but save your excuses—that’s just the SEAL way.