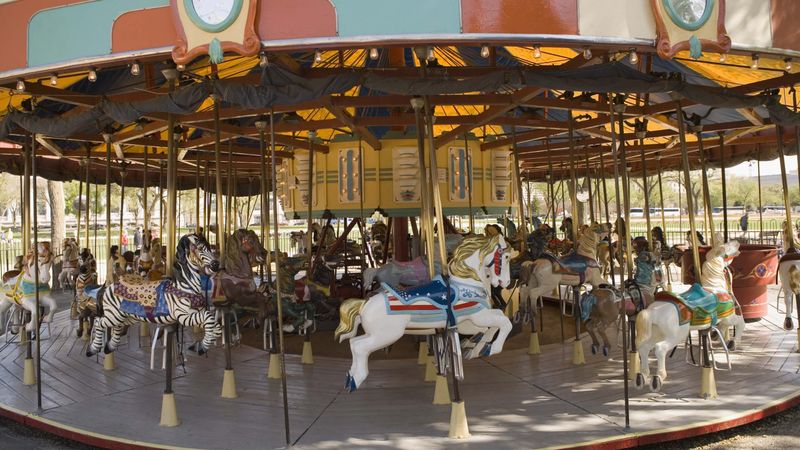 Look, I’m not gonna lie. There are some problems with my carousel, and I can’t blame these folks for voicing their dissatisfaction in their extremely negative online reviews of my business.

Meghan B. is not exaggerating here. The poles on my carousel are very hot. I do not know why that is the case. I think it might have something to do with the poles rubbing up against some of the gears down underneath, but I am not sure. I have tried to cool them off by spraying them down with water, but that has not worked. For a while, I tried using a chemical coolant on the poles, but it was giving people rashes, so I went back to water. Obviously, the high temperature of the poles and general wetness of the carousel on a whole are legitimate concerns, and I am doing my best to address them.

Okay, so ideally, the carousel would move around and around instead of up and down. I understand that people expect a carousel to move a certain way, and it is unfortunate that mine does a different and worse thing. But I am doing the best I can. I am not an engineer. I do not have the technical know-how to make it rotate. This is something I have made peace with.

All I was trying to do by having the carousel play a looping track of me apologizing was let people know that I am aware that there are some issues with the carousel and that I am working on fixing them. I thought that they would hear my voice saying “I’m sorry. I’m sorry. Oh my God, I am so sorry” over and over again and think, “Wow, this guy is really humble and appreciates his customers.” In retrospect, this was a misstep on my part, and I probably should have stuck with a more traditional carousel tune like “You’re A Grand Old Flag” or “Ta-Ra-Ra Boom-De-Ay.” I tried to change or turn off the apologies, but the stereo receiver is far too hot to touch. Making mistakes is how we learn, and I appreciate Ruth J. for offering this constructive feedback.

Point taken. I should have left the horse in the wild.

I can totally see where Gabe is coming from, but out of fairness to me, he’s not telling the whole story. I have repeatedly asked the man who lives in the carousel to leave, but he will not. He is extremely unreasonable and rude, and every time I try to talk to him, he throws hot oil at me. Despite my many attempts to lure him off the carousel with food and toiletries, he has remained obstinately lodged in the center of my carousel. While I would like to forcibly remove him, he is elderly, and I fear that a physical altercation could result in a lawsuit. Kind of a damned if you do, damned if you don’t situation here.

Honestly, I thought people would like to have a carousel on the freeway. It seemed like a good way to reach a lot of folks, and I figured most people would think it was a fun little surprise to break up the monotony of their commute. I did not anticipate how many accidents it would cause, nor how much traffic blocking three lanes of the 405 freeway would generate. For these things, I apologize. But I promise you, my intentions here were good. Bottom line: I now understand that the freeway is a bad place for a carousel.

There’s no way around it: This was a real tragedy, and I sympathize with Eric L. As soon as I realized how dangerous my carousel was, I felt that the responsible course of action was to call the Pentagon and warn them that my carousel could conceivably be weaponized by ISIS to commit acts of terrorism. Within an hour, my carousel was destroyed in a drone strike, and everyone on it died. While I am not trying to shirk my responsibility here, I do wish the Pentagon had given me some warning so that I could have evacuated the carousel before the attack. My heart goes out to Eric. L. and all those who lost loved ones in the drone strike on my currently destroyed carousel. This whole situation is extremely regrettable, and I am working to remedy this and all the other problems enumerated in these more-than-fair assessments of my private carousel business. Thank you.