The Perils Of Dishonesty: This Man Whose Gums Bled The Second The Dental Hygienist Started Flossing His Teeth Tried To Hide The Fact That He Never Flosses By Saying His Gums Bleed For 9 Hours A Day And Now They’re Airlifting Him To The Hospital 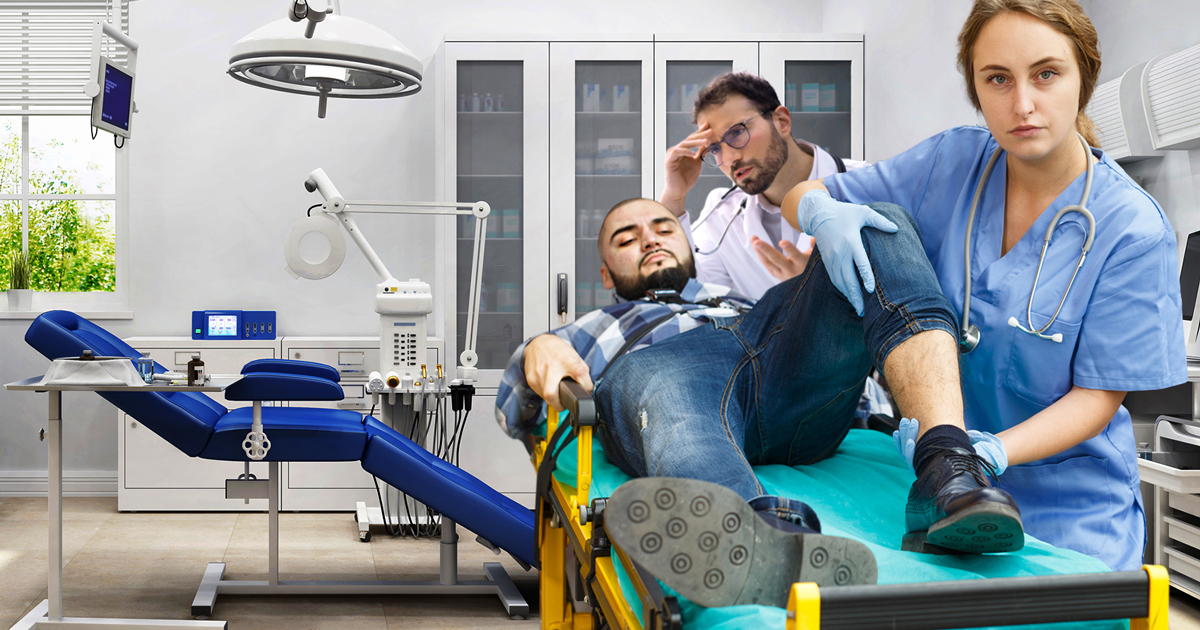 Although you may think there’s nothing wrong with telling a fib every now and again, this story proves that there is a price to pay for dishonesty: This man whose gums bled the second the dental hygienist started flossing his teeth tried to hide the fact that he never flosses by saying his gums bleed for nine hours a day and now they’re airlifting him to the hospital.

Well, that’s what you get for living a life of lies.

Earlier today, 38-year-old Kenneth Bateman of Rhinebeck, NY had his first teeth cleaning in over two years, and, as a result, his gums became a bloody mess as soon as the hygienist flossed just two of his teeth. Rather than own up to the fact that he’s a nearly 40-year-old man who flosses so rarely that he’s not sure if he even has floss in his house, Kenneth turned to the hygienist and said, “Just so you know, my gums bleed for nine hours every day, so this is normal for me.” While Kenneth clearly thought this would sufficiently explain the blood while deflecting the blame, instead, the hygienist screamed and ran out of the room, and before Kenneth knew what was happening, he was surrounded by ten people in hazmat suits who started injecting him with syringes and hooking him up to beeping machines.

Kenneth was given a chance to apologize for his lie when a man in a hazmat suit asked how long this had been happening for, but instead of telling the truth, Kenneth said, “It’s been happening as long as I can remember,” which caused the medics to turn on the sprinkler system and run out of the room. Then, several automatic belts suddenly strapped Kenneth to the examination chair as the office’s roof opened up to reveal a helicopter flying overhead. A man jumped down and attached several cords to the chair, but Kenneth could not be brought into the helicopter without risking the pilot’s safety, so he’s just hanging loose as they now make their way to the top-ranked hospital in the state.

Yikes. Good luck with whatever tests they run on you in the hospital, Kenneth – they’ll likely be painful, but they’re what you get for your duplicity. This just goes to show that while it may sometimes be tempting to lie to get yourself out of a sticky situation, there can be unforeseen consequences to your deceit.